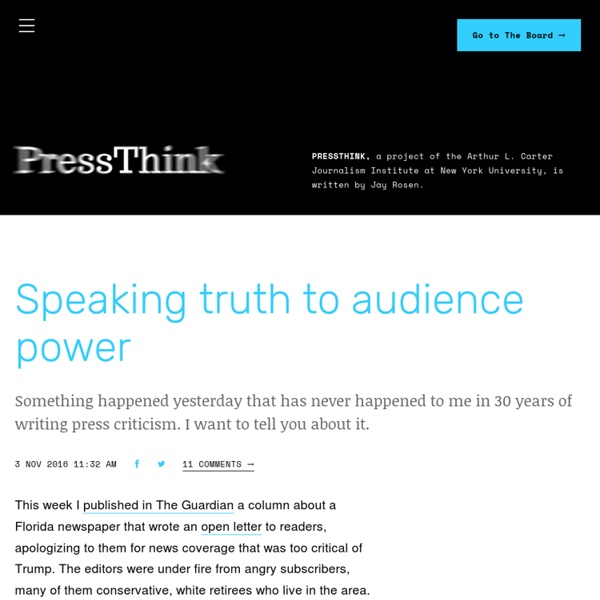 Feb.4 These are my notes for a talk I’m giving today at the Reynolds School of Journalism at the University of Nevada, Reno What I’m calling the personal franchise model in journalism is not new. I.F. Stone’s Weekly was a personal franchise — it fit the definition I am about to give you — and he started that in 1953. Also, I’m not trying to be comprehensive in this analysis.

NSRD National Defense Research Institute The National Defense Research Institute (NDRI), a federally funded research and development center (FFRDC), conducts RAND research for the Office of the Secretary of Defense (OSD), the Joint Staff, the Unified Combatant Commands, the defense agencies, the United States Marine Corps, and the United States Navy. RAND research for the U.S. Air Force is carried out within RAND Project AIR FORCE, while research for the U.S. Why did Hillary Clinton lose? Sign Up for Our free email newsletters Donald Trump's victory over Hillary Clinton will probably be considered the second-greatest upset in American presidential politics, after Harry Truman's come-from-behind victory in 1948. It raises one big question: Why did Clinton lose? Trump is a literally unprecedented candidate in American history: He is the first American president to be elected with no military or political experience of any kind.

Animal Mutilation The FBI’s Reading Room contains many files of public interest and historical value. In compliance with the National Archives and Records Administration (NARA) requirements, some of these records are no longer in the physical possession of the FBI, eliminating the FBI’s capability to re-review and/or re-process this material. Please note, that the information found in these files may no longer reflect the current beliefs, positions, opinions, or policies currently held by the FBI. The image quality contained within this site is subject to the condition of the original documents and original scanning efforts. These older files may contain processing procedures that are not compliant with current FOIA processing standards.

The Personal News Cycle: How Americans choose to get news Published This research was conducted by the Media Insight Project — an initiative of the American Press Institute and the Associated Press-NORC Center for Public Affairs Research Introduction Contrary to the conventional wisdom about media consumption dividing along generational or political lines, a new survey finds that the nature of the news itself — the topic and speed of the story — largely determines where people go to learn about events and the path they take to get there. The findings also suggest that some long-held beliefs about people relying on just a few primary sources for news are now obsolete. “There are five devices or technologies that majorities of Americans use to get news in a given week.

About - reported.ly First Look Media’s reported.ly is based all over the world, but we’re all easily reachable. Find out a little more about us below and how to get in contact with us. Our Twitter: Our team Twitter listOur FacebookOur subredditOur Storify collectionOur Medium collection Our team Malachy Browne Crime One of the best things about writing Slate’s crime blog has been the opportunity to become familiar with the work of North America’s best crime reporters. There are a lot of great ones out there working the crime beat, and I asked a few to name their favorite stories of 2013. Here are their responses: Doug Brown, Cleveland Scene. Nationally, the best crime story, I think, is "Two Gunshots on a Summer Night" by Walt Bogdanich and Glenn Silber in the New York Times, about the suspicious death of the girlfriend of a sheriff's deputy in St. Augustine, Fla.

Innovation The intrinsic structure of companies has long been a subject of study, most famously by Ronald Coase, the eminent British economist and recipient of the 1991 Nobel Prize in economics. In 1937, Coase published a seminal paper, The Nature of the Firm, in which he explained that, in principle, a firm should be able to find the cheapest, most productive goods and services by contracting them out in an efficient, open marketplace. However, markets are not perfectly fluid. Transaction costs are incurred in obtaining goods and services outside the firm, such as searching for the right people, negotiating a contract, coordinating the work, managing intellectual property and so on. Firms thus came into being to make it easier to get work done.