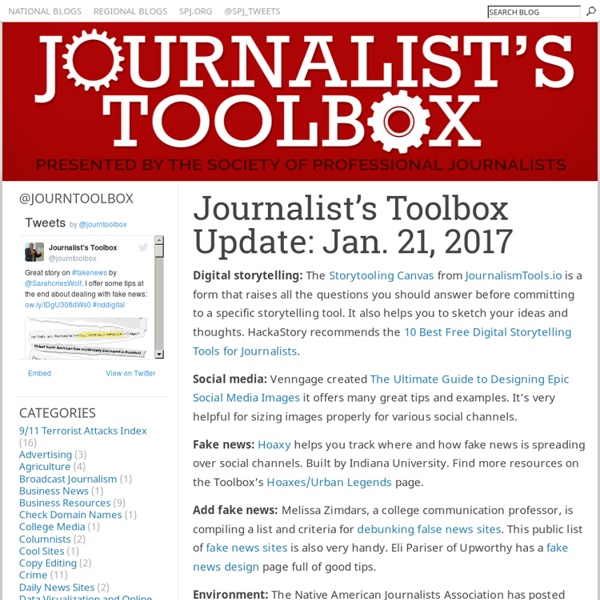 Privacy and Protecting Sources: Here are some resources from a Reporters Without Borders privacy and encryption session on April 11. WeFightCenstorship.org's Online Survival Kit gives you tools and shows you how to protect yourself from leaving a digital trail. HideMyAss.com is a free proxy that lets you surf anonymously online, hide your IP address, secure your internet connection, hide your internet history, and protect your online identity. VirusTotal lets you run any suspicious files through a free, encrypted tool to detect any viruses. TrueCrypt is a free, on-the-fly, open-source encryption tool. Data Visualization: A great read and a helpful new data visualization tool: A strong piece on Aron Pilhofer and data journalism from the Tow Center.

The 99 Greatest blogs you aren't reading What’s the best way to keep track of journalism and technology? Read non-journalism blogs. When I am asked how do I find all the cool and innovative sites and tools featured at 10,000 Words, I quickly reply that I subscribe to more than 150 blogs, using Google Reader to keep track of them all. For the first time, here is a list of many of those blogs and sites, edited for relevance. Most of these blogs have little relation to journalism and cover everything from technology to design to photography and everything in between. You’ll find my absolute favorites and suggested reads at the top of the list and even more great sites following after. EncycloZine: Puzzles, Games, Space, Illusions, Science, Web design, Humanities, Arts, Life, Technology, History Search hotels Games, Mazes, Puzzles, Art Gallery, Science, Web design, Technology, Spirographs, Optical Illusions, Quizzes and Trivia, Space and Planets, Humanities, Arts, Life, History / Gallery Hits, Top 100 Aberdeen Banff Springs Hotel Aberdeen Abu Dhabi Emirates Palace Hotel Abu Dhabi

How to talk to the press How to talk to the press A short guide to what works and what doesn't when talking to reporters Sometime around the year 2000 I started getting requests for interviews with reporters and it never really stopped. These days I talk to two or three newspaper reporters a week, amounting to hundreds of interactions with the press in the past few years. Based on what I've learned, here's a list of good and bad aspects, followed by my best and worst experiences, and some final thoughts.

Steven Wells Says Goodbye As commenter 293 below wrote at 9:04 this morning, "FUCK!!!!!!" Two years ago today our friend, colleague and (in ways we're just fully understanding now) mentor Steven Wells passed away. We still miss him dearly. And, of course, we're not alone. Just look at these Tweets! He meant a whole lot to a whole lot of people. Archive » O’Reilly study generates national attention » Indiana University School of Journalism Professor Mike Conway has spent the better part of his life reporting and studying news, but his latest research project has made him the subject of the news. Conway is co-author of a study focusing on the oft-discussed media personality Bill O’Reilly. While many have accused the Fox News anchor of inciting fear and bias among his audience, what makes Conway and his colleagues’ research unique is quantitative data to back up their claims. Conway, along with IU telecommunications professor Maria Elizabeth Grabe and journalism doctoral student Kevin Grieves, picked up where the Institute for Propaganda Analysis left off in the 1930s, using a system of coding speech that analyzes the use of propaganda. "It was supposed to be a way for the public to determine if someone is giving them propaganda instead of facts," Conway said.

LOOSENING LIPS : The Art of the Interview by Eric Nalder The Art of the Interview Eric NalderSeattle Times RESEARCH: The best questions are informed questions. Despite the Riots and Threats, I Stand By What I Wrote : Johann Hari Last week, I wrote an article defending free speech for everyone – and in response there have been riots, death threats, and the arrest of an editor who published the article. Here’s how it happened. My column reported on a startling development at the United Nations.

FAQ / About us What is Anxiety Culture? AC began as a magazine, in 1995, exploring the anxieties behind the smiling mask of "normal" society. It contains ideas and gimmicks for navigating the stressed, over-competitive, work-obsessed times we live in. The website went online in 1998, intended as a cocktail of curious news, satire, outsider psychology and uplifting propaganda. What is OSINT? How can I make use of it? In the past months, we have reviewed a couple interesting OSINT utilities. In fact, a few weeks ago, we also published the Top 20 OSINT Tools as a great resource for everyone starting an information security investigation. But one thing is missing for all those who have just been introduced to the fascinating world of cybersecurity: the key concept of OSINT. We are talking and writing about OSINT, Infosec, Tools, Cybersecurity, and Open Source. But do you really know the definition of OSINT?