Home - On The Media 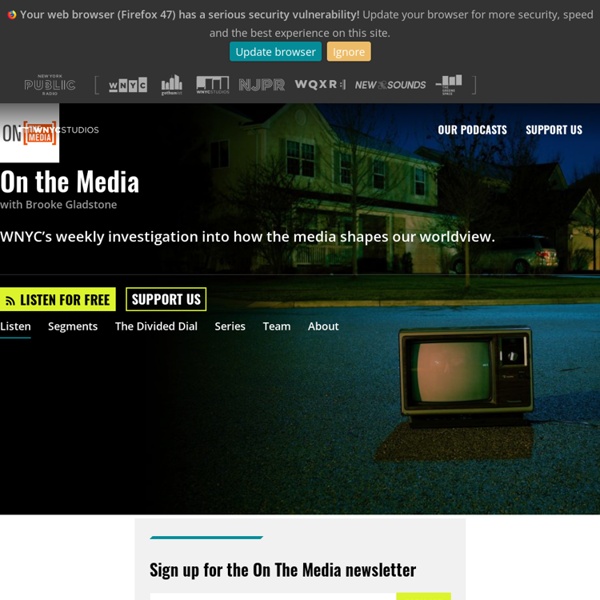 Waverly Hills Sanitorium - Historical and Paranormal Site Starting Thursday January 2, 2014 we will begin taking reservations for tours and investigations for 2014! The office will open at 9:00 am Eastern Time. Tours and Investigations begin in March! Why Everything you Know about Influence is Wrong Last week we talked about the five influence traps you must avoid. For this leg of the conversation on influence, we'll be reviewing the theory of the few. In The Tipping Point, Malcolm Gladwell wrote about connectors, mavens, and salespeople. He shared stories to demonstrate that in essence individual action and strong ties work together to confer different kinds of super hero powers to connectors, mavens, and salespeople. Paul Revere started a word-of-mouth epidemic for the message about the British invasion -- people believed him and sprung to action. From the book, connectors know more people and more of the right kinds of people.

How to Gain Competitive Insight With Social Media Are you looking for that competitive edge? Want to know what your peers are up to? Using social media to research competitors can provide useful information for any business looking to . Social networking sites are a 'modern form of madness' The way in which people frantically communicate online via social networking sites such as Twitter and Facebook can be seen as a modern form of madness, according to the leading sociologist. Sherry Turkle, a professor at the Massachusetts Institute of Technology, writes in her new book, Alone Together: “A behaviour that has become typical may still express the problems that once caused us to see it as pathological.” She explains that people are become isolated from reality due to such social networking sites because technology is dominating our lives and making us "less human". Under the illusion of allowing us to communicate better, technology is actually isolating us from real human interactions in a cyber-reality that is a poor imitation of the real world, she suggests. “We have invented inspiring and enhancing technologies, yet we have allowed them to diminish us,” she writes.

European Countries Refuse to Release Information on CIA Rendition Flights Romania's National Registry Office for Classified Information (ORNISS) headquarters building is seen in the background of this image taken in Bucharest, December 9, 2011. International media has reported that between 2003 and 2006, the CIA operated a secret prison from the building's basement, bringing in high-value terror suspects for interrogation and detention. ORNISS has denied hosting a CIA prison and the CIA has refused to comment. Curation Becomes Social: Pearltrees Launches 'Team' Version Posted by Tom Foremski - December 7, 2010 [For much of this year I have been working with Pearltrees, which offers a visual web site curation service based on the visual metaphor of 'pearls' please see below for an example.] Pearltrees this week launched a "Team" version of its curation service that allows groups of people to collaborate on curating a topic. Up until now each Pearltree was the responsibility of one person. Alexia Tsotsis at Techcrunch reported:

3 Ways to Capitalize on the Opportunity Economy Social media isn’t all about planned campaigns and editorial calendars. In some cases, the best way to make an impact – to win the hearts and minds of customers and prospects – is by being timely, hyper-relevant, and individualized. This is contextually appropriate, just-in-time marketing where you find a chance to engage authentically, and you take it. This is the Opportunity Economy, and social media lets you tap into it like never before.

Article Social gaming exploded in 2010. Addictive apps like FarmVille and Mafia Wars grabbed the attention of social network users, the press—and marketers. eMarketer forecasts social gaming revenues will surpass $1 billion this year. Most of those dollars will come from virtual items purchased by the 61.9 million internet users who will play social games this year, according to eMarketer estimates. Anna Politkovskaya Anna Stepanovna Politkovskaya (Russian: А́нна Степа́новна Политко́вская; Ukrainian: Га́нна Степа́нівна Політко́вська; 30 August 1958 – 7 October 2006) was a Russian[1] journalist, writer, and human rights activist known for her opposition to the Chechen conflict and President of Russia Vladimir Putin.[2] On 7 October 2006 she was shot and killed in the lift of her block of flats, an unsolved murder that continues to attract international attention.[6][7][8] Early life[edit] Journalistic work[edit]

Old Spice To Use Chosen Superfan To Promote Next Ad The next Old Spice commercial will go out to an audience of one: The brand is going to seed the ad to one superfan to disseminate within his or her social network. The move comes after the brand's spokesman, Isaiah Mustafa, returned yesterday with a 74-second video explaining that he's back. Mustafa was the star of the brand's "Smell Like a Man, Man" campaign, which garnered more than 24 million views on YouTube last year, making it the most-viewed ad of 2010.