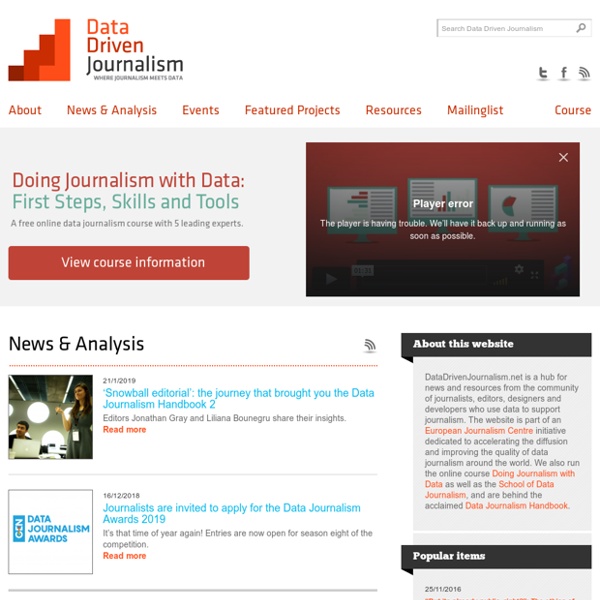 VIS. Visual Investigative Scenarios platform: Pages Future Crimes — Anticipating Tomorrow's Crimes Today — Page 3 Data Visulization Course Materials This resource page features course content from the Knight Center for Journalism in the America's massive open online course (MOOC), titled "Data Visualization for Storytelling and Discovery." The four-week course, which was powered by Google, took place from June 11 to July 8, 2018. We are now making the content free and available to students who took the course and anyone else who is interested in learning how to create data visualizations to improve their reporting and storytelling. The course was taught by Alberto Cairo, He created and curated the content for the course, which includes video classes and tutorials, readings, exercises, and more. The course materials are broken up into four modules: Module 1: Offers an introduction to visualization: what it is, how it works, and what ethical considerations are involved in its design. As you review this resource page, we encourage you to watch the videos, read the readings, and complete the exercises as time allows. Goals Videos 1. 2. 3.

Our Company Our tagline, “do good with data” describes our philosophy, as well as our approach. Some of the places we've been mentioned: The New York Times Chicago Tribune MTV The Guardian CBS NBC PRINT Magazine The Washington Times Los Angeles Times The Atlantic Mashable Fast Company Popular Science Wired Awards and Recognition Advisor to the US Congressional Budget Office Company featured in the February 2012 issue of Print Magazine Featured in Communication Arts Interactive Annual in 2009 and 2011 Highlighted on the New York Times Developer Blog for innovative use of their API Featured in CommArts Insights, and numerous CommArts web picks of the day and week Featured as a Partner Success Story on Adobe.com Received the Vast Challenge Award in 2010 Cooper-Hewett National Design Award finalist in 2010 for our body of work Company included in “Journalism in the Age of Data”, a documentary film about data visualization produced by Stanford University and used in their course curriculum Publications

Florence Nightingale is a Design Hero - Nightingale - Medium Founder of modern nursing. Feminist champion. Celebrity entrepreneur. Passionate statistician. Political operator. Data visualization pioneer. It is as criminal to have a mortality of 17, 19, and 20 per thousand in the Line, Artillery and Guards, when that in civil life is only 11 per 1,000, as it would be to take 1,100 men out upon Salisbury Plain and shoot them. The Englishwoman who wrote take 1,100 men out upon Salisbury Plain and shoot them. Heroic design begins with a plan for selfless victory. Before Nightingale, the sick were cared for by untrained widows, ex-servants, and paupers. Before Nightingale, disease destroyed military campaigns. Before Nightingale, women died more often giving birth in hospitals than at home. Worse, without data, only an anecdotal feel for these problems was accessible. Florence Nightingale’s backstory reads like a “chosen one” epic. In Egypt, Nightingale cruised the Nile and discovered ancient mysticism. How did Nightingale elicit reform?

How to Filter in R: A Detailed Introduction to the dplyr Filter Function Data wrangling. It’s the process of getting your raw data transformed into a format that’s easier to work with for analysis. It’s not the sexiest or the most exciting work. In our dreams, all datasets come to us perfectly formatted and ready for all kinds of sophisticated analysis! In real life, not so much. It’s estimated that as much as 75% of a data scientist’s time is spent data wrangling. One of the most basic data wrangling tasks is filtering data. Think of filtering your sock drawer by color, and pulling out only the black socks. Whenever I need to filter in R, I turn to the dplyr filter function. As is often the case in programming, there are many ways to filter in R. Why do I like it so much? A brief introduction to dplyr Before I go into detail on the dplyr filter function, I want to briefly introduce dplyr as a whole to give you some context. dplyr is a cohesive set of data manipulation functions that will help make your data wrangling as painless as possible. Loading Our Data !