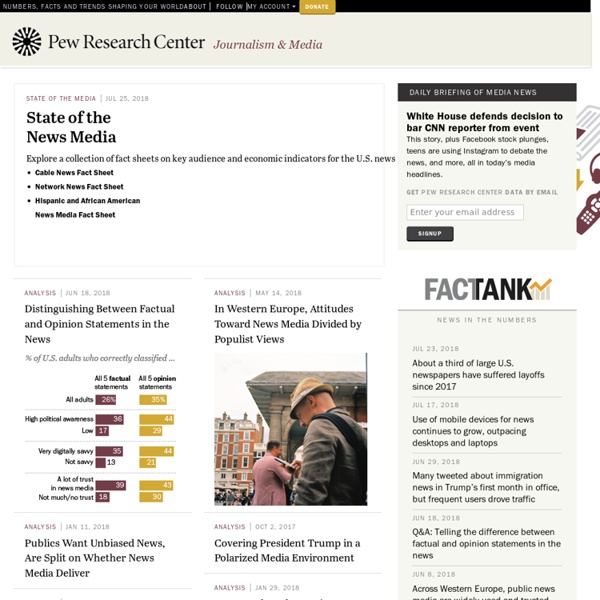 Why did Hillary Clinton lose? Sign Up for Our free email newsletters Donald Trump's victory over Hillary Clinton will probably be considered the second-greatest upset in American presidential politics, after Harry Truman's come-from-behind victory in 1948. It raises one big question: Why did Clinton lose? Trump is a literally unprecedented candidate in American history: He is the first American president to be elected with no military or political experience of any kind. How Entrepreneurial Journalism Will Change Our World January 24, 2011 | 4 Comments Think about the best article you read last year. The hard hitting, excellently researched, insightfully written article that you just couldn't put down. Now think about how much money you spent to read it. Was it in a magazine you subscribe to?

Paris Review Daily - Blog, Writers, Poets, Artists - Paris Review Donald Barthelme would’ve been, and should be, eighty-three today. It would be an exaggeration to say that I feel the absence of someone whom I never met—someone who died when I was three—but I do wonder, with something more than mere curiosity, what Barthelme would have made of the past twenty-odd years. These are decades I feel we’ve processed less acutely because he wasn’t there to fictionalize them: their surreal political flareups, their new technologies, their various zeitgeists and intellectual fads and dumb advertisements. Part of what I love about Barthelme’s stories is the way they traffic in cultural commentary without losing their intimacy, their humanity. The Personal News Cycle: How Americans choose to get news Published This research was conducted by the Media Insight Project — an initiative of the American Press Institute and the Associated Press-NORC Center for Public Affairs Research Introduction Contrary to the conventional wisdom about media consumption dividing along generational or political lines, a new survey finds that the nature of the news itself — the topic and speed of the story — largely determines where people go to learn about events and the path they take to get there. The findings also suggest that some long-held beliefs about people relying on just a few primary sources for news are now obsolete. “There are five devices or technologies that majorities of Americans use to get news in a given week.

Facebook's Growing Role in Social Journalism A Facebook-only news organization? It was only a matter of time. The Rockville Central, a community news site in the Washington, D.C., area, will move all its operations and news coverage to its Facebook Page starting on March 1. About - reported.ly First Look Media’s reported.ly is based all over the world, but we’re all easily reachable. Find out a little more about us below and how to get in contact with us. Our Twitter: Our team Twitter listOur FacebookOur subredditOur Storify collectionOur Medium collection Our team Malachy Browne A Cocktail Party With Readers I haven’t been tweeting long enough to judge its merits. But I note that some Times writers and editors have become prolific at it, sending out thousands of tweets to thousands and, in some cases, hundreds of thousands of followers. For them, the online service, which allows you to transmit 140-character messages and links, has emerged as a vast medium of information exchange.

Blog This post is a recap of presentations from the Social@Scale Summit on April 1, 2014, hosted by Battery Ventures in Boston, MA. To learn more about the Summits, just click here. Boston’s Innovation District, an up-and-coming community situated at the heart of the city’s Seaport neighborhood, was the perfect setting for last week’s Social@Scale Summit. Brand marketers, social practitioners, and innovators of every kind gathered at Battery Ventures’ beautiful new offices to discuss what it means to be social at scale. Presentations, guided by the 5C’s of enterprise social media infrastructure — Conversation, Community, Collaboration, Content, and Campaign — touched on the importance of analytics-minded team members, strategic visual elements, employee advocacy, and more.

Innovation The intrinsic structure of companies has long been a subject of study, most famously by Ronald Coase, the eminent British economist and recipient of the 1991 Nobel Prize in economics. In 1937, Coase published a seminal paper, The Nature of the Firm, in which he explained that, in principle, a firm should be able to find the cheapest, most productive goods and services by contracting them out in an efficient, open marketplace. However, markets are not perfectly fluid. Transaction costs are incurred in obtaining goods and services outside the firm, such as searching for the right people, negotiating a contract, coordinating the work, managing intellectual property and so on. Firms thus came into being to make it easier to get work done.

Why Curation Is Important to the Future of Journalism Josh Sternberg is the founder of Sternberg Strategic Communications and authors The Sternberg Effect. You can follow him on Twitter and Tumblr. Over the past few weeks, many worries about the death of journalism have, well, died. Despite shrinking newsrooms and overworked reporters, journalism is in fact thriving. The art of information gathering, analysis and dissemination has arguably been strengthened over the last several years, and given rise and importance to a new role: the journalistic curator. The concept of curating news is not new.

All Stories by Zeynep Tufekci The Media Needs to Stop Inspiring Copycat Murders. Here's How. After a wave of teen suicides in the 1980s, news outlets began reporting on these deaths more cautiously. Similar guidelines could help prevent more shooting sprees. Social Media's Small, Positive Role in Human Relationships It's just one factor in modern life that can increase connection in a world divided by the vagaries of capitalism, the disengagement of television, and the isolation of suburban sprawl.

Crowdfunded photojournalism platform Emphas.is receives $21K from 'backers' After going live in early March the site claims to already have more than $20,000 in backing from the public A new platform for crowdfunded photojournalism which aims to build a community around projects has received more than $20,000 in backing, just over a week since it went live. Emphas.is works by inviting story proposals and an expenses budget estimate from professional photojournalists, to be reviewed by a board of advisers working against a set list of criteria. Individuals can then make a contribution to approved projects, giving them access to a 'making-of' zone, where photojournalists communicate with their 'backers' through blogging, video and pictures as well as directly. After going live earlier this month with nine projects, the site reported thousands of dollars in backing just days in, reaching $21,000 at the end of last week.