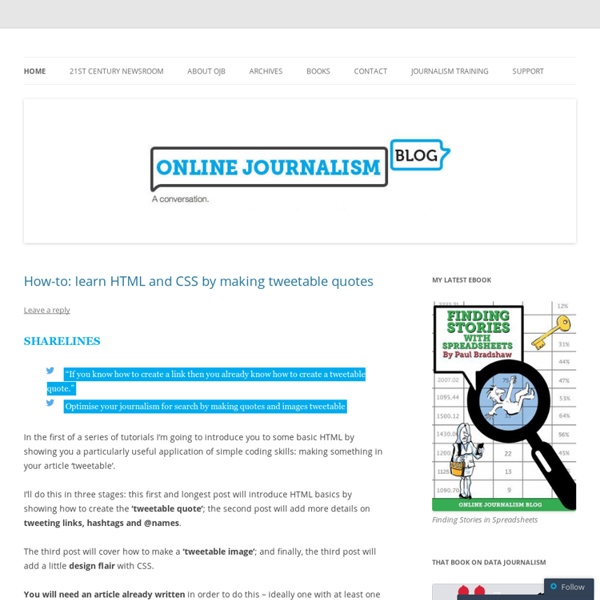 In a few weeks I will begin publishing my new ebook: Finding Stories In Spreadsheets. The book has been written in response to requests from journalists who need a book on Excel aimed at storytellers, not accountants. Finding Stories In Spreadsheets will outline a range of techniques, including ways to find the ‘needle in the haystack’ in text data, number calculations to make stories clearer, and methods of cleaning and combining data to tell new stories, including getting data ready for maps and charts. The book will be available for a discounted rate for the first couple of weeks. To be informed when it’s available, register your interest on the Leanpub page. If you assumed that the future of journalism would only be free (or at least advertiser-funded), says SA Mathieson, you’re wrong.

m.guardian.co.uk How many people live in poverty in America? It's only a month since the official estimates showed 46.2m Americans living below the poverty line, which is 15.2% of the population. But today, new figures from the US Census Bureau show that another 3m people are living below the poverty line, one in six people. What's happened? Basically, the Census Bureau has come up with a new way of counting the poor. Projects Projects metaLAB projects seek to establish new standards of scholarly excellence, imagination, and impact even as they hack conventional academic structures. They privilege collaboration, experimentation, and iteration. Large or small, they derive their substance not only from rigorous research and design thinking but also from the input of audiences, end-users, and peers. Some projects operate within university walls, others outside. metaLAB serves as a catalyst, incubator, and platform, working to spin off selected projects into freestanding, sustainable ventures. projects

#media140 – Carlos Alonso’s favourite tools to finds stories behind the data Here at Journalism.co.uk we understand data is one of the buzzwords in journalism at the moment, it is why we have built our news:rewired conference around the topic, and its popularity was certainly clear from the packed room at Media140 today, where journalist and online communications specialist Carlos Alonso spoke on the topic. Alonso first discussed why the use of data itself is not new, illustrating this with the use of data in the 1800s to pinpoint deaths of cholera geographically, which then led to the finding that many occurred close to a specific well, or the mapping of revolutions in Scotland or England in 1786 to map where conflict was taking place. The golden age of using data mining was in the 1700s and 1800s.

Flowing Media: Your Data Has Something To Say Many Eyes The first web site to put sophisticated visualization techniques in everybody's hands. Upload and visualize your data for free. Web Seer A visualization that lets you compare two Google Suggest queries. As seen on the New York Times and Boston Globe New York Times Visualization Lab Specifically designed for The New York Times, this version of Many Eyes lets readers visualize and comment on information and data sets presented by Times editors. NameVoyager Explore historical name trends letter by letter.

Sensate Journal Steven Feld: Acoustemic Stratigraphies: Recent Work in Urban Phonography » Sensate Journal Acoustemic Stratigraphies: Recent Work in Urban Phonography This piece derives from an October 2010 presentation at Harvard’s Sensory Ethnography Lab. In it, Steven Feld introduces three recent soundscape compositions and follows their audition with critical conversation about his work in “acoustemology,” (acoustic epistemology), sound as a way of knowing. Telling Better Stories by Designing Custom Maps Using TileMill Plotting information — say survey data in Pakistan’s Federally Administered Tribal Areas or election results in Afghanistan — on any kind of map adds critical geo-context to the data. These maps quickly become move powerful when you start adding more custom overlays, showing data like where different ethnic groups live, high incidents of corruption, or more complex visuals like the number of deaths per drone strike in Pakistan and which U.S. president ordered it. What is really amazing is how accessible it is now for people to make custom maps to be able to tell more complex stories with data. Specifically, tools like Google Maps, OpenLayers, and Polymaps have made basic web mapping ubiquitous by making it simple to drop a map into a website, and their APIs open the door for everyone to customize maps by adding custom layers.

UCLDH: The Hub of a (virtual) Network My recent trip to University College London was a great success* and has left me with a ton of information to digest, ideas to play around with, and questions to ask. (It also left me with a long illness, which is why this first post is extremely late in the making). One of the main points of the DiggingDH project is to question the concept of a ‘center’ – so it was interesting for me to pay a visit to a center which primarily exists in the virtual. Masterclass 20: Getting started in data journalism If you are impatient to get started, and just quickly do some data journalism, click here If you aren't a subscriber, you'll need to sign up before you can access the rest of this masterclass If you want to find out what data journalism is, and what it's for, before you get stuck in, then read on, or click on the video or audio files Video: Are you confused about what data journalism is, how you do it, and what its purpose is? If so, join the club.

TraceMedia - About Us We specialise in web applications, 2D & 3D visualisations, mapping and the digital arts. Our work covers a wide range of fields including education, museum exhibits, architecture and design. Many of our projects are research based, enabling us to experiment with emerging technologies and their creative potential. We have a broad range of production, programming and design skills, including – HTML5, Javascript, JQuery, MySQL, PHP, Flex/Flash, C++, OpenGL, Python and Java. Our core team members all have over 15 years experience in New Media.

tapor TAPoR 2.0 is a reimagining of the original TAPoR (Text Analysis Portal for Research). It is a both a resource for discovery and a community. The TAPoR team has created a place for Humanities scholars, students and others interested in applying digital tools to their textual research to find the tools they need, contribute their experience and share new tools they have developed or used with others. We've recently debuted TAPoR 2.5 and have made some changes we think you will enjoy.

Coding for Journalists 101 : A four-part series Photo by Nico Cavallotto on Flickr Update, January 2012: Everything…yes, everything, is superseded by my free online book, The Bastards Book of Ruby, which is a much more complete walkthrough of basic programming principles with far more practical and up-to-date examples and projects than what you’ll find here. I’m only keeping this old walkthrough up as a historical reference. Digital Humanities (101) The following, “Digital Humanities (101),” was presented on Wednesday, March 12, 2013, by Josh Honn, Digital Scholarship Fellow, Center for Scholarly Communication & Digital Curation, and Geoff Morse, Coordinator of Humanities and Social Sciences, to librarians and staff at Northwestern University Library. This presentation was also a chance to quasi-officially launch “A Guide to Digital Humanities” and Chicago DH. Introduction Thank you all for coming out for our presentation on digital humanities (which I’ll also be calling simply DH).