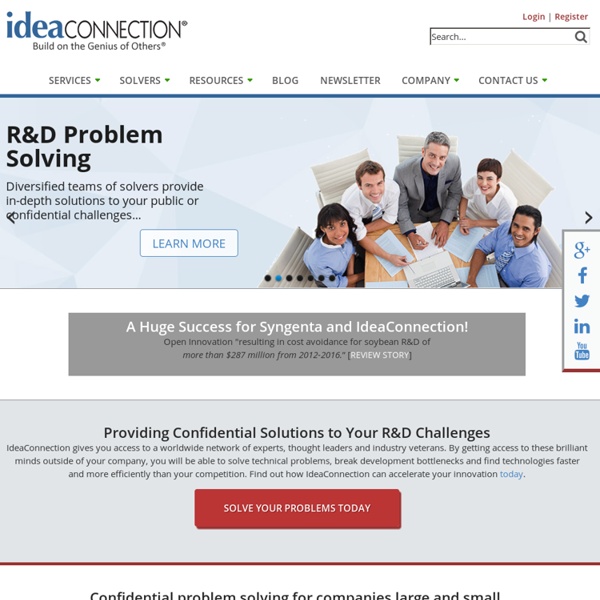 Ideas bank Many ideas banks are provided as free of charge, or set around certain companies in general to work out new inventions. Although ideas are provided by a community of people, problems can arise when people take the ideas of the site and begin developing them.[citation needed] There is no possible way to prove that the idea on the ideas bank was original and not taken from something else. The front end of innovation is quite distinct from the remainder of the innovation process. When the very best ideas are discovered they can be managed with a stage gate oriented project management system, where the work flow is defined. The front end of innovation is commonly referred to as "fuzzy" because it functions best when a collaborative system nurtures chaos, disruption and the serendipitous discovery of ideas.

You Gotta Love Lego – Crowdsourcing meets Open Innovation! Yes, you gotta love Lego! Not only is the company doing amazingly well during this ”crisis”; they are also constantly experimenting with new ways of working together with partners. Their new thing is Lego Cuusoo. Here Lego has teamed up with Cuusoo, which is a Japanese pioneer of user innovative product design that introduced a design-to-order process already in 1998. This image gives you a good explanation of the project: Blog — Metalworks by Maxus The first-mover in the space belongs to the media publishers, most of them offering a condensed version of their app on the watch. The New York Times has introduced “one-sentence stories”, going as far as calling them a “new form of storytelling to help readers catch up in seconds.”[3] Others like The Economist leveraged the voice technology feature to read out its stories when users tap on a story from its Apple Watch app – in a British-accented voice! Jason Kint, CEO of Digital Content Next, a trade group for publishers that includes Conde Nast and the Times, said Apple Watch creates an opportunity for well-known media brands.

COMMENTAIRE D'HÔTES: Quand les journalistes de guerre revenir à la maison With U.S. military involvement in Iraq ending and troops coming home, news coverage rightfully focuses on the lives of these men and women and their adjustment to noncombat roles. Notable stories document the challenges facing veterans who cope with physical and mental health injuries, including depression and post-traumatic stress disorder. However, what is typically missing in the analysis of postwar issues are accounts of the print and broadcast journalists who have spent extended time embedded with troops and borne witness to death and destruction while working in harm's way. Several recent research studies have documented that news media workers might suffer from stress, burnout and mental anguish, in percentages comparable to military personnel and other first responders, as a result of being brutally close to the action. Steve Bell, former ABC News correspondent/anchor and Vietnam War reporter who recently taught at Ball State, notes: "Imagine, journalists are human, too!

Global Ideas Bank The Global Ideas Bank's origins lie in the Institute for Social Inventions, which was set up in 1985 by Nicholas Albery, social inventor and visionary. From small beginnings (a network of inventors, a quarterly newsletter), the Institute grew into a full-fledged organisation under his leadership: producing an annual compendium, running social inventions workshops and promoting creative solutions around the world. It was part of the first European Social Innovations Exchange. In 2001, the Institute was awarded a Margaret Mead Special Recognition Award for "community creativity for a new century"

Idea Market: A stock exchange metaphor for empowering collaborative innovation Combining the benefits offered by web 2.0 technologies and mindset plus Experian Latin America’s people-oriented culture, in late 2008 we conceived a web ideation platform called Idea Market. It functions as a metaphor of a stock market, in which employees act like entrepreneurs, investors and/or advisors. By doing this, Idea Market extracts the wisdom of the crowds to improve Experian's decision on which ideas should get attention from the board, promoting a BOTTOM-UP management and strategy setting. It also builds an entrepreneurial environment where employees engage themselves to their contributions. Furthermore, it fosters and recognizes employees' collaboration and provides a recognition & reward framework based on accumulated amount of a virtual currency (EXP$, or Experians). The platform was developed internally with the assistance of an external consultancy firm.

Michael Hastings on war journalists Rolling Stone‘s Michael Hastings — whose 2010 article on Gen. Stanley McChrystal ended the Afghanistan War commander’s career by accurately reporting numerous controversial statements made in a series of interviews — embodies the pure journalistic ethos. Some of the most celebrated establishment military reporters in America attacked Hastings for that article on the ground that it violated a sacred trust between Generals and war reporters (The New York Times‘ John Burns), and even baselessly insinuated that he fabricated the quotes and then went on to impugn his patriotism when compared to The Great General (CBS News’ Lara Logan). Even worse, The Washington Post, ABC News and others irresponsibly published totally anonymous military sources claiming with no basis that Hastings violated ground-rule agreements for the interviews. In the face of that media-military onslaught, it would have been easy for this young reporter to protect his careerist ambitions and back down.

Jeu Rapporteur de guerre a beaucoup à apprendre Hayat Indriyatno War journalism has always evoked images of greenhorn reporters setting off on a quixotic quest to a faraway land to cover a conflict that eventually takes on a personal meaning for them. This year, that romantic facade took on a new sheen with the Arab Spring, when anyone with a video camera, Internet access and social media account could become a frontline journalist reporting from the heart of the turmoil sweeping North Africa and the Middle East. “All this may seem like fun to some, covering wars, but in fact it’s an extremely deadly business,” Tony Maniaty, a veteran war correspondent and now senior lecturer in international journalism at the University of Technology Sydney, told the Jakarta Globe. “Some of my students are able to buy an HD camera, laptop and cheap air ticket from Sydney to Kabul and be reporting from the frontline for $5,000.”

gavinkeech personal cargo phases are cycling through the increase of momentum brought on by interplay sequenced through recognition. exhausting parameters to their stretched states allow the decay values to become discovered. upon discovery, arrival of presence, flows to the environments ground. intensity of emotion, feelings entwined with realisation that the possibilities can arise more probable than initially conditioned, through emergence of understanding what is required, do vectors resonate inputs, to flow freely, in their own accord towards the electromagnetic* (resonance)+ core. state / mode as an interface ( points & flows with vectors ) personas / metaconstructs = state / mode identity / experience filter = timelines dimension / environment = interface process / mechanism = actions knowledge / repository = database timelines ( personas ) are extrapolations (verb)actions ( entanglement ) are amplifications (verb)interface ( metaconstructs ) are communications (verb)