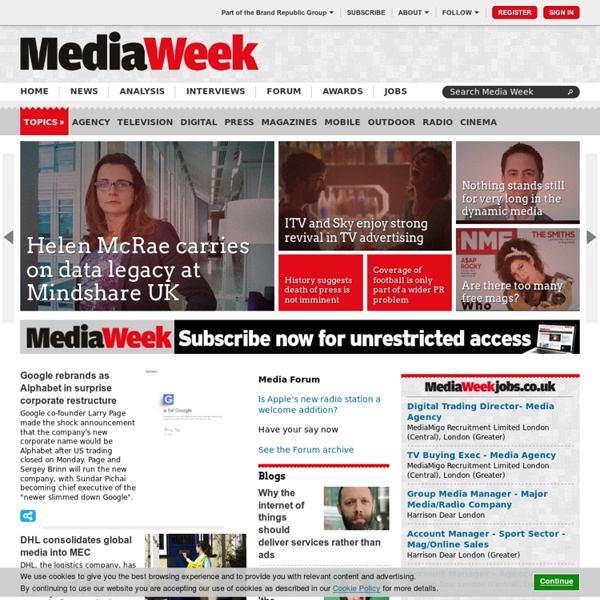 NMA - New Media Age You know you’re working in UX when … I’m sure you’ve heard the expression 'Never work with children or animals' right? Well, after you’ve read this lot, I reckon you’ll want to add participants, facilitators and even clients to this list. You see, since my last blog I’ve spent a few weeks “playing journalist” sourcing weird, wonderful and downright bizarre stories from the UX (User Experience) Community. The idea came to me while I was telling a friend how I had to sit throughout a whole study earlier this year in Norway, trying not to crack up every time a participant had to fill in his name on a form. So it got me thinking that there must be other amusing or even downright weird experiences that my fellow UX practitioners might like to share with me... and share they did! They’re all anonymous and I hope you at least find them interesting, even if they might not tickle you as much as they tickled me. Read more... Even though it's early January, this is not a 2014 predictions post.

Advertising news & advertising jobs - visit Campaign's website for brands, ad agencies & to watch ads Digital Buzz Blog | Digital Campaigns, Online Marketing, Social & More. mUmBRELLA Starcom's school for staff satisfaction In 2008 when the UK was sliding into recession, Starcom MediaVest Group launched an exclusive, expensive, twice-yearly personal development course for its rising stars. Twelve hand-picked candidates were sent a cryptic invitation telling them to pack their toothbrush, accompanied by a picture of ageing actor John Nettles. The next thing they knew, they were being flown to a charming yoga retreat in the middle of the countryside near Bergerac in France’s Dordogne. Before they had time to explore the converted barn or orchard, they were pulled into the first of many intensive workshops run by an external company. The moderators explained to the confused bunch that they were going to be taken on a personal journey over the next four days where they would get to know themselves – and each other – on a different level. What’s more, the journey would be entirely for their benefit. Liz Nottingham, Starcom’s HR director, says: "The media industry is about people. Challenging beliefs and behaviour

ca-Cola could drop Rooney Mon, 13 Sep 2010 | By Russell Parsons Coca-Cola is said to be considering dropping Wayne Rooney over allegations that he had sex with a prostitute while his wife Coleen was pregnant. Wayne Rooney, Coca-Cola’s street striker campaign According to a report in The Sunday Times, executives at the soft drink company’s Atlanta office have ordered its British business to drop the England and Manchester United star over concerns that the revelations will taint its image as a family-friendly brand. Executives in Britain are said to be resisting the move. Rooney is thought to earn about £600,000 a year from his deal with Coca-Cola. He fronts a television show “Street Striker” on Sky where he helps amateur footballers develop their football skills. The show is sponsored the drinks maker’s Coke Zero brand, which is marketed to young men and is often referred to as “Bloke Coke”. Rooney is said to earn about £7.3m per year from endorsements including Nike and EA Sports as well as Coca-Cola.

welcome to optimism Christmas is the most wonderful time of year, but it can be tough. You want to make your loved ones happy, but you also want that amazing shiny new thing for yourself. Three hit on the insight that self-indulgence is big at Christmas, but that it doesn't stop people wanting to treat their loved ones. And that’s where Three's generous Christmas promotion comes in: splash out on a gift for yourself and they’ll give you a discount on a gift for someone special. It's the best of both worlds: treat your loved ones at Christmas, by treating yourself at the same time. To help Three sing the news from the (metaphorically, unfortunately) snow-dusted rooftops, we conceived a campaign that really makes Christmas all about you, via a specially designed app called CalendarMe. The app, created with the technical wizardry of Unit9, uses clever colour-matched image replacement technology to insert users’ faces into their very own calendar. This Christmas give them what they really want. 365 days of you.

YouTube to trial live streaming platform - Media news - Media Week The live shows, from content partners Howcast, Next New Networks, Rocketboom and Young Hollywood, follow on from YouTube's broadcasts of live matches from the Indian Premier League and concerts from the rock band U2 on You Tube. The live programming will begin at 8am Pacific Time (4pm in the UK) and shows on during the first day include ‘Rocketboom live’ at 4pm (UK time) and ‘Tony Hawk Kicks Back at the YH Studio’ at 7.30pm. According to YouTube the new platform integrates live streaming directly into YouTube channels and all broadcasters need is a webcam or external camera. The live stream includes a "Live Comments" module which allows users to engage with the broadcaster and community. On a YouTube blog post it asked users to "bear with us as we test this new platform as there may be some bumps along the way" and asked users to share feedback in the comments section.