Definition of Tragic Hero-1. Outline of Aristotle's Theory of Tragedy. Biomimicry. Students think they know how WW1 soldiers felt. They don't. Michael Gove provoked a storm earlier this year when he attacked "leftwing academics" for promoting a Blackadder version of the first world war. 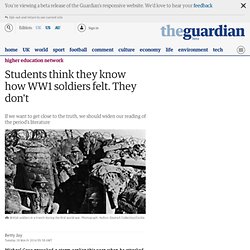 He insisted soldiers were not duped into fighting but saw the war as a "noble cause". An academic who teaches the literature of the Great War considers the problem. I often reflect on how knowledge is communicated from one generation to another. For many of my students at Royal Holloway, University of London, ideas about what the war means are already fixed because they have encountered Siegfried Sassoon and Wilfred Owen, poets whose voices have come to stand for a whole generation. Asked about the causes of the war, these students are usually able to recall an assassination followed, somehow, by an inexplicable bloodletting, but the notion of "futility" prevents them from giving the question due consideration.

International-womens-day-2014-men-and-women-do-not-have-different-brains-says-neuroscientist-9178661. In a speech at ScienceGrrls’s ‘Fighting the Neurotrash’ talk at the Women of the World Festival on Saturday, Neuroscientist Professor Gina Rippon claimed that gender differences are environmental and not innate, the Telegraph reported.

While a study published last year said that men are better suited to perception and co-ordinated action, and women have better mutli-tasking skills, Professor Rippon will claim that seemingly biological differences in brain wiring are easy to change. “The bottom line is that saying there are differences in male and female brains is just not true. There is pretty compelling evidence that any differences are tiny and are the result of environment not biology,” Professor Rippon, of Aston University Birmingham told the newspaper. Scotland's future. Viewpoint: Should charm be taught in schools? 12 March 2014Last updated at 21:19 ET If "charm" helps people get on business and in their personal lives, is there a case for teaching it in school, asks Stephen Bayley. 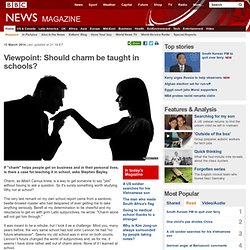 Charm, as Albert Camus knew, is a way to get someone to say "yes" without having to ask a question. So it's surely something worth studying. Why not at school? The very last remark on my own school report came from a sardonic, beetle-browed master who had despaired of ever getting me to take anything seriously. It was meant to be a rebuke, but I took it as a challenge. Given what an effective tool it is in communications, it is astonishing how few politicians of any stripe possess much charm. Continue reading the main story. Are there really 21 million slaves worldwide? 10 March 2014Last updated at 17:53 ET By Ian Muir-Cochrane BBC News Some Caribbean nations are demanding reparations from Europe over the Atlantic slave trade. 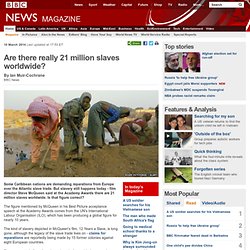 But slavery still happens today - film director Steve McQueen said at the Academy Awards there are 21 million slaves worldwide. Study: Social networks like Facebook can spread moods. 13 March 2014Last updated at 03:37 ET "What people feel and say in one place may spread to many parts of the globe," wrote the authors A study by researchers at the University of California, Yale, and Facebook has found that moods can spread virally through social media sites such as Facebook. 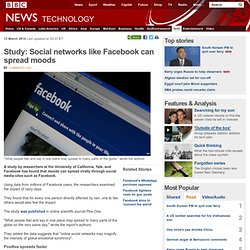 Using data from millions of Facebook users, the researchers examined the impact of rainy days. They found that for every one person directly affected by rain, one to two others would also feel the impact. The study was published in online scientific journal Plos One. "What people feel and say in one place may spread to many parts of the globe on the very same day," wrote the report's authors. 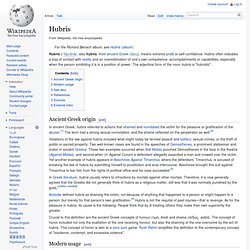 Hubris often indicates a loss of contact with reality and an overestimation of one's own competence, accomplishments or capabilities, especially when the person exhibiting it is in a position of power. The adjectival form of the noun hubris is "hubristic". Ancient Greek origin[edit] In ancient Greek, hubris referred to actions that shamed and humiliated the victim for the pleasure or gratification of the abuser.[1] The term had a strong sexual connotation, and the shame reflected on the perpetrator as well.[2] In Greek literature, hubris usually refers to infractions by mortals against other mortals.

Aristotle defined hubris as shaming the victim, not because of anything that happened to a person or might happen to a person, but merely for that person's own gratification.[4] Hubris is not the requital of past injuries—that is revenge. Modern usage[edit] See also[edit] References[edit]