Risk & Challenge on the Playground

Kids safe NSW inc: Challenging & Risky Play. Children both need and want to take risks in order to explore their limits, venture into new experiences and for their development. 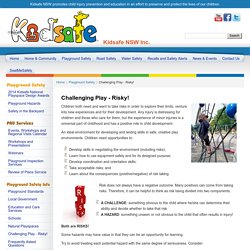 Any injury is distressing for children and those who care for them, but the experience of minor injuries is a universal part of childhood and has a positive role in child development. Play for Today. A look at the development of play provision. 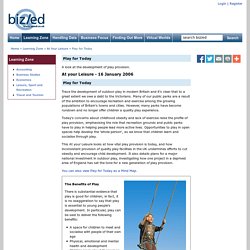 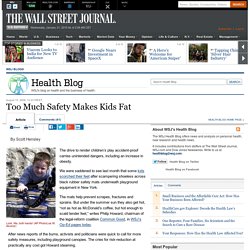 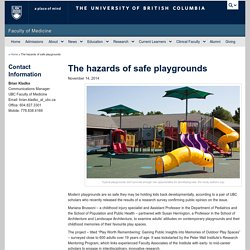 Modern playgrounds are so safe they may be holding kids back developmentally, according to a pair of UBC scholars who recently released the results of a research survey confirming public opinion on the issue. Mariana Brussoni – a childhood injury specialist and Assistant Professor in the Department of Pediatrics and the School of Population and Public Health – partnered with Susan Herrington, a Professor in the School of Architecture and Landscape Architecture, to examine adults’ attitudes on contemporary playgrounds and their childhood memories of their favourite play spaces. Risky play and skinned knees are key to healthy child development. Zoom Here’s what kids at play have always liked to do: Race, climb, wrestle, hang, throw, balance, fence with sticks, jump from heights and gravitate toward sharp objects. 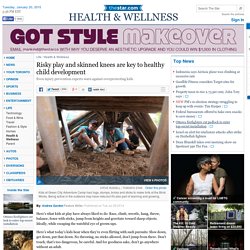 Ideally, while escaping the watchful eye of grown-ups. Here’s what today’s kids hear when they’re even flirting with such pursuits: Slow down, get down, put that down. No throwing, no sticks allowed, don’t jump from there. ISO and IPEMA certified - Safe challenges - Playground Equipment - Playground Equipment. Pushing the Envelope of Playground Design with Risk & Challenge by JC Boushh - Goric Marketing Group USA, Inc. In today’s age of tech savvy children playground designers are constantly designing new and innovative play components to attract today’s wired-child to the playground. 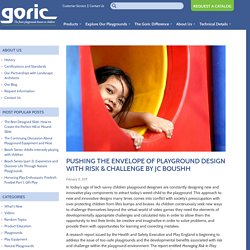 This approach to new and innovative designs many times comes into conflict with society’s preoccupation with over protecting children from life’s bumps and bruises. As children continuously seek new ways to challenge themselves beyond the virtual world of video games they need the elements of developmentally appropriate challenges and calculated risks in order to allow them the opportunity to test their limits, be creative and imaginative in order to solve problems, and provide them with opportunities for learning and correcting mistakes. Children's play equipment too safe for their own good, expert warns. LEAP OF FAITH: Children aren't taking enough risks due to too-safe play equipment. 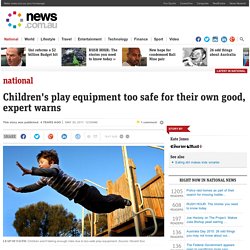 Source: Herald Sun PLAY equipment designed by "safety nazis" doesn't allow children to learn from risk-taking, an expert has warned. More kids aged two to seven were getting injured in playgrounds because they didn't know how to take calculated risks. A speaker at the Early Childhood Education Conference in Melbourne this week, early childhood specialist Prue Walsh said modern "plastic fantastic" playgrounds were too safe. LASER Alliance. The Over-Protective Designer. In the Smithsonian article "Kids Don't Need Equipment, They Need Opportunity," Roger Hart, an environmental psychologist, remarks that “Most people who care about child development know nothing about design, and most people who design know nothing about child development. 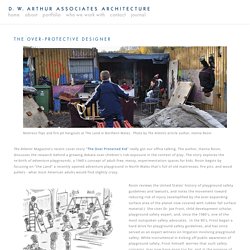 " Writing for the University of Texas, Kay Randall, the author of an article entitled Child's Play, notes the historical and continued difficulty of creating consensus between designers, safety specialists and child development experts. These articles really challenged us. How can we as designers create places to best enhance children's development through play? Are we as designers contributing to uninteresting, un-challenging playground design if we acquiesce to societal forces with zero risk-tolerance? Are Playgrounds Too Safe? The child who insists on running up the slide at the playground is doing it for a good reason. 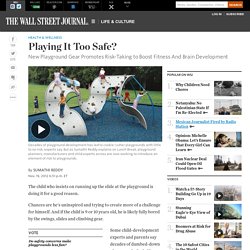 Chances are he's uninspired and trying to create more of a challenge for himself. And if the child is 9 or 10 years old, he is likely fully bored by the swings, slides and climbing gear. Some child-development experts and parents say decades of dumbed-down playgrounds, fueled by fears of litigation, concerns about injury and worrywart helicopter parents, have led to cookie-cutter equipment that offers little thrill. Can playgrounds be too safe? CBC Radio.

AP Photo My eldest son got a haircut last week, a close cut which revealed a two-inch scar at the back of his scalp. 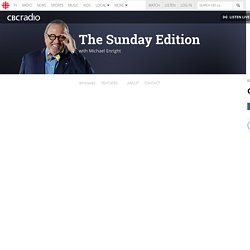 When people ask him how he got it, he says: "It's an exit wound. " The truth is not so romantic. I was feeding him when the high chair tipped back and he clanged his head on a radiator. My middle son was on a first name basis with some of the nurses at the emergency room in the local hospital. My youngest son, on the other hand, has neither scar nor scratch on him. The Overprotected Kid. A trio of boys tramps along the length of a wooden fence, back and forth, shouting like carnival barkers. “The Land! It opens in half an hour.” Down a path and across a grassy square, 5-year-old Dylan can hear them through the window of his nana’s front room.

He tries to figure out what half an hour is and whether he can wait that long. When the heavy gate finally swings open, Dylan, the boys, and about a dozen other children race directly to their favorite spots, although it’s hard to see how they navigate so expertly amid the chaos. It’s still morning, but someone has already started a fire in the tin drum in the corner, perhaps because it’s late fall and wet-cold, or more likely because the kids here love to start fires.

The Land is an “adventure playground,” although that term is maybe a little too reminiscent of theme parks to capture the vibe. The playgrounds were novel, but they were in tune with the cultural expectations of London in the aftermath of World War II. Can a Playground Be Too Safe? “I grew up on the monkey bars in Fort Tryon Park, and I never forgot how good it felt to get to the top of them,” Mr.

Stern said. “I didn’t want to see that playground bowdlerized. I said that as long as I was parks commissioner, those monkey bars were going to stay.” His philosophy seemed reactionary at the time, but today it’s shared by some researchers who question the value of safety-first playgrounds. Even if children do suffer fewer physical injuries — and the evidence for that is debatable — the critics say that these playgrounds may stunt emotional development, leaving children with anxieties and fears that are ultimately worse than a .

“Children need to encounter risks and overcome fears on the playground,” said Ellen Sandseter, a professor of at Queen Maud University in Norway. Playground risk returns: The growing movement to let kids play like kids. At first, parents fretted about the rocky hillside. It screamed danger to some who gathered at a town hall about Lord Selkirk School’s new playground plans three and a half years ago. What if the children were running over the hill, didn’t see the rocks and tumbled down, scraping their knees and elbows or worse? Stormie Duchnycz, principal of the Winnipeg school, and the landscape designer who was working on the plans carefully explained its hidden virtues: The rocky hill would help expose their children to nature, it would be physically challenging and engage the whole of their little bodies.

Why Risk is Essential in Play - Infinite Playgrounds. We live in an increasingly risk adverse world but is this healthy and when can a little risk be good? Playgrounds in particular are wrapped up in health and safety however, as Infinite Playgrounds advises, it is worth taking time to unwrap the red tape and discover the benefits of good risk. What Makes a Good Playground? Trim trail play area, The Bowes Museum Firstly, it is important to look at what makes a playground a good place to play. Good playgrounds are about creating the right balance between risk and safety. Challenge. Children love a challenge. They enjoy the sense of mastery over their body and its emotions, especially fear. As they play, they test their abilities, giving themselves new goals and challenges to master. Encouraging children to take risks in playing prepares them for life. When the government published its safeguarding strategy for children last summer the part that caught the eye – and the headlines – was not about child protection but about the dangers of over-protecting them.

Rough and Tumble Play. Figure 1: Two juvenile male rats are shown, at about 35 days old, engaging in a play fight in which they compete for access to the napes of each other’s necks. One rat approaches from behind towards the nape of the partner’s neck (a, b). Risky Play and Children’s Safety: Balancing Priorities for Optimal Child Development. Safety Versus Challenge. Risk and Our Pedagogical Relation to Children: On the Playground and Beyond - Stephen J. Smith. Managing Risk & Play. Children’s Play Space and Safety Management: SAGE Open. Abstract The provision of stimulating and engaging play space for children and young people is increasingly recognized as an important societal goal, not the least because it provides the young with opportunities to develop and gain experience in experimenting with risk.