Xbox One. Xbox One is a line of eighth generation home video game consoles developed by Microsoft. 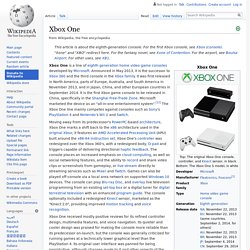 Announced in May 2013, it is the successor to Xbox 360 and the third console in the Xbox family. It was first released in North America, parts of Europe, Australia, and South America in November 2013, and in Japan, China, and other European countries in September 2014. PlayStation 4. Sony intends more focus on social gameplay, incorporating a "share" button on the new controller and enabling a view of in-game play streamed live from friends. 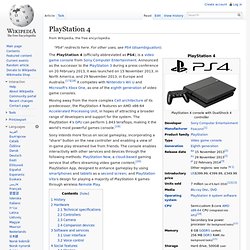 The console enables interactivity with other services and devices through the following methods: PlayStation Now, a cloud-based gaming service that offers streaming video game content;[20] PlayStation App, designed to enhance gameplay by using smartphones and tablets as a second screen; and PlayStation Vita's design for playing a majority of PlayStation 4 games through wireless Remote Play. History[edit] The company revealed release dates for North America, Central America, South America, Europe and Australia, as well as final pieces of information at a Gamescom press event in Cologne, Germany on 20 August 2013. Hardware[edit] Technical specifications[edit] Although not available on the system at launch,[56] the PS4 features a "Suspend mode" feature. The Last of Us. Development of The Last of Us began in 2009, soon after the release of Naughty Dog's previous game, Uncharted 2: Among Thieves. The relationship between Joel and Ellie became the central focus of the game, with all other elements developed around it. Actors Troy Baker and Ashley Johnson portrayed Joel and Ellie respectively through voice and motion capture, and assisted creative director Neil Druckmann with the development of the characters and story. The original score was composed and performed by Gustavo Santaolalla. Following its announcement in December 2011, The Last of Us was widely anticipated. Upon release, it received widespread critical acclaim, with praise directed at its narrative, gameplay, visual and sound design, characterization, and depiction of female characters.

Ni no Kuni. Conceived as a project for Level-5's tenth anniversary, Ni no Kuni: Dominion of the Dark Djinn was released in December 2010 for the Nintendo DS. 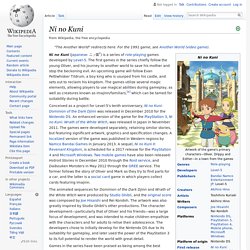 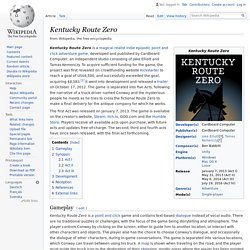 There are no traditional puzzles or challenges, with the focus of the game being storytelling and atmosphere. The player controls Conway by clicking on the screen, either to guide him to another location, or interact with other characters and objects. Brothers: A Tale of Two Sons. Gameplay[edit] Brothers is presented from a third-person view overlooking the two brothers. 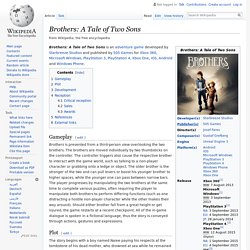 The brothers are moved individually by two thumbsticks on the controller. The controller triggers also cause the respective brother to interact with the game world, such as talking to a non-player character or grabbing onto a ledge or object. The older brother is the stronger of the two and can pull levers or boost his younger brother to higher spaces, while the younger one can pass between narrow bars. The player progresses by manipulating the two brothers at the same time to complete various puzzles, often requiring the player to manipulate both brothers to perform differing functions (such as one distracting a hostile non-player character while the other makes their way around).

Plot[edit] The story begins with a boy named Naiee paying his respects at the tombstone of his dead mother, who drowned at sea while he remained unable to save her. Development[edit] The Stanley Parable. Assassin's Creed IV: Black Flag. 2013 video game Assassin's Creed IV: Black Flag is an action-adventure video game developed by Ubisoft Montreal and published by Ubisoft. 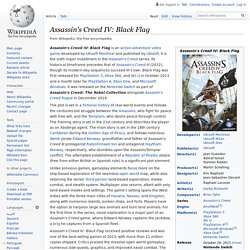 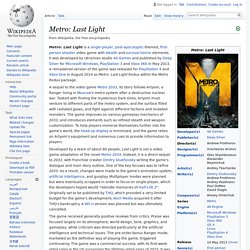 It was developed by Ukrainian studio 4A Games and published by Deep Silver for Microsoft Windows, PlayStation 3 and Xbox 360 in May 2013. BioShock Infinite. Synopsis[edit] Setting[edit] BioShock Infinite takes place in the steampunk air city of Columbia.[1] 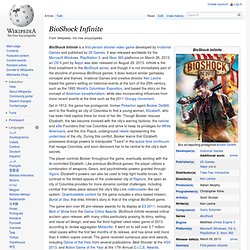 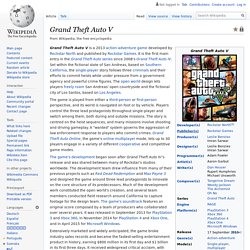 It is the first main entry in the Grand Theft Auto series since 2008's Grand Theft Auto IV. Set within the fictional state of San Andreas, based on Southern California, the single-player story follows three criminals and their efforts to commit heists while under pressure from a government agency and powerful crime figures. The open world design lets players freely roam San Andreas' open countryside and the fictional city of Los Santos, based on Los Angeles. Don't Starve. The game follows a scientist named Wilson who finds himself in a dark, dreary world and must survive as long as possible. Toward this end, the player must keep Wilson healthy, fed, and mentally stable as he avoids a variety of surreal and supernatural enemies that will try to kill and devour him. The game's "Adventure" mode adds depth to the sparse plot and pits Wilson against the game's antagonist, Maxwell.

Don't Starve was Klei's first foray into the survival genre. Conceived during the height of a game industry trend of dropping players into a world with few instructions and a goal of survival, the game was influenced by Minecraft, which spearheaded this trend, as well as by filmmaker Tim Burton. The game received positive reviews from critics; commended for its original art style, music, and variety of ways for the player to die, although its high level of difficulty and implementation of permanent death were less warmly received.

Gameplay[edit] Beyond: Two Souls. Beyond: Two Souls is an interactive drama action-adventure video game for the PlayStation 3 home video game console, created by French game developer Quantic Dream and published by Sony Computer Entertainment. It was released in October 2013. The game features Jodie Holmes, one of two player characters. The other is an incorporeal entity named Aiden: a separate soul linked to Jodie since birth. Jodie, who is portrayed by actress Ellen Page, possesses supernatural powers through her psychic link to Aiden, growing from adolescence to adulthood while learning to control Aiden and the powers they share. Willem Dafoe co-stars as Nathan Dawkins, a researcher in the Department of Paranormal Activity and Jodie's surrogate-father-figure.

Rayman Legends. The Swapper. The Swapper is a puzzle-platform video game for Microsoft Windows, Mac OS X and Linux. It was developed and published by Facepalm Games, a small independent company based in Helsinki, Finland.[3] Curve Studios later ported the game to Sony and Nintendo platforms in 2014.[4] In this science fiction-themed title, the player controls a female scavenger stranded aboard an abandoned research station, and discovers a strange device that allows her to create clones of herself switching their consciousness between these clones. Papers, Please. Factorio.

Factorio is an upcoming real-time strategy video game in development by Wube Software. The completed version is scheduled to be released in 2017 for Microsoft Windows, OS X, and Linux.[1][2] Development[edit] RimWorld. Gone Home. XCOM: Enemy Unknown.