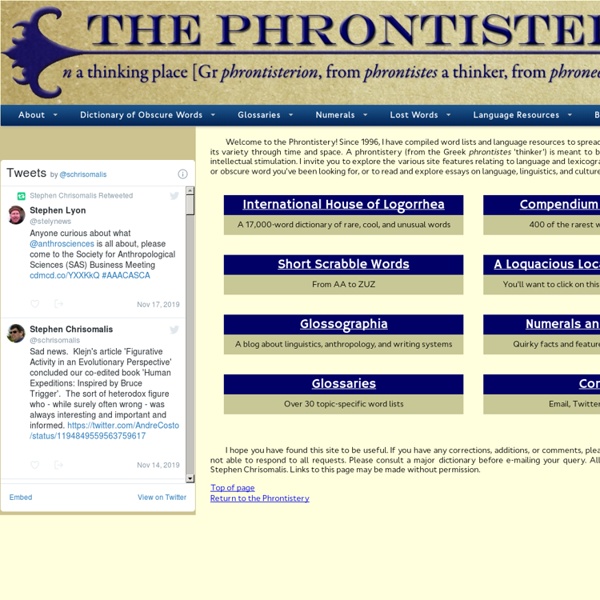 7 Beautiful Words With No Direct English Translation You know that feeling you get when surrounded by close friends or family -- perhaps gathered around a fireplace after a meal, or chatting on the couch in your pajamas on a Sunday morning? There truly is no word to describe it. Or at least not in English. In Dutch, there's gezellig, which means cozy, but encompasses more than a physical feeling. It is a sort of social coziness. This and other words without direct English translations have been compiled in the collection, Lost in Translation: An Illustrated Compendium of Untranslatable Words from Around the World.

Writer Creates “Color Thesaurus” To Help You Correctly Name Any Color Imaginable Ingrid Sundberg, a writer and children’s book illustrator, created a very useful infographic chart for anyone struggling with color names. The writer says that she loves to collect words that can help give her stories variety and depth. Show Full Text “I’ve learned that we all have different associations with color words,” Sundberg told Bored Panda. “For example the color sapphire is a light blue to me (since that’s the color of the sapphire on my engagement ring), but a sapphire can also be a very dark blue. I doubt there can be an ‘official color guide,’ as color is so subjective.” The Color Thesaurus I love to collect words. Making word lists can help to find the voice of my story, dig into the emotion of a scene, or create variety. One of my on-going word collections is of colors. I love to stop in the paint section of a hardware store and find new names for red or white or yellow.

12 Letters That Didn't Make the Alphabet You know the alphabet. It’s one of the first things you’re taught in school. But did you know that they’re not teaching you all of the alphabet? There are quite a few letters we tossed aside as our language grew, and you probably never even knew they existed. 1. Thorn

Origins Of Popular Jewish Surnames Correction, Jan. 29, 2014: Some of the sources used in the reporting of this piece were unreliable and resulted in a number of untruths and inaccuracies. The original post remains below, but a follow-up post outlining the errors, as well as further explanation, can be found here. Ashkenazic Jews were among the last Europeans to take family names.

19 amazing English words we've totally forgotten about 1. Twirlblast A tornado, according to people in the 1700s. Why we switched to tornado, I’ll never understand. Animal Adjectives Animal Adjectives While there are other forms of adjectives for animals, by far the greater majority of such words end in -ine; thus the following list deals excusively with this type. The -ine suffix comes from the Latin -inus and forms terms meaning 'of or relating to' or 'of the nature of'. 11 Little-Known Words for Specific Family Members The words we use for family members in English are specific about some things, and vague about others. Our vocabulary marks a distinction between our mother and her sisters (some languages use one word for mother and maternal aunts), but doesn't say whether siblings are older or younger (some languages have different words for brother and sister depending on their age relative to you). We lack words that pick out particular family members (we have "cousin," but what about child-of-my-father's-brother?) as well as certain general terms (we have "siblings" for brothers-and-sisters, but what about nieces-and-nephews?) If you look hard enough, you can find some words to help fill in the gaps.

List of animal names Wikipedia list article For many animals, particularly domesticated ones, there are specific names for males, females, young, and groups. The best-known source of many English words used for collective groupings of animals is The Book of Saint Albans, an essay on hunting published in 1486 and attributed to Juliana Berners.[1] Most terms used here may be found in common dictionaries and general information web sites.[2][3][4] Generic terms[edit] Terms by species or taxon[edit]