20 awesomely untranslatable words from around the world 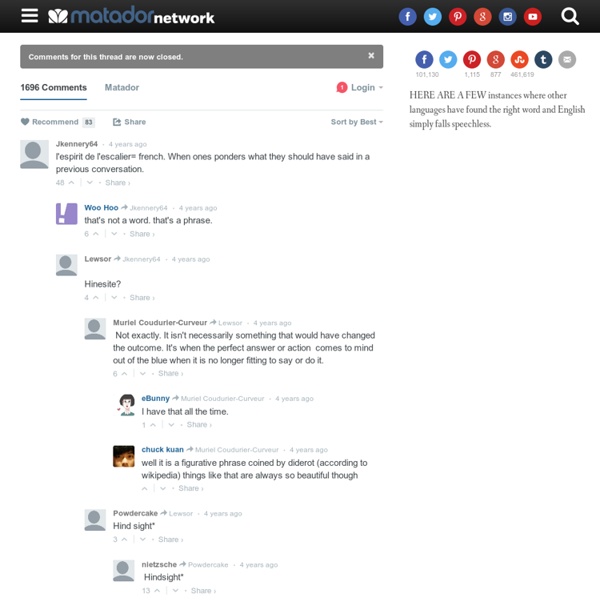 Photo: Juan Pablo Lauriente HERE ARE A FEW instances where other languages have found the right word and English simply falls speechless. 1. Toska Russian – Vladmir Nabokov describes it best: “No single word in English renders all the shades of toska. At its deepest and most painful, it is a sensation of great spiritual anguish, often without any specific cause. 2. Yagan (indigenous language of Tierra del Fuego) – “The wordless, yet meaningful look shared by two people who both desire to initiate something but are both reluctant to start.” 3. Indonesian – “A joke so poorly told and so unfunny that one cannot help but laugh.” 4. Inuit – “To go outside to check if anyone is coming.” 5. Czech – Milan Kundera, author of The Unbearable Lightness of Being, remarked that, “As for the meaning of this word, I have looked in vain in other languages for an equivalent, though I find it difficult to imagine how anyone can understand the human soul without it.” 6. 7. 8. 9. 10. 11. 12. 13. 14. 15. 16.

20 more awesomely untranslatable words from around the world If only you could use these words in Scrabble. Photo: Jeremy Mates When linguists refer to “untranslatable” words, the idea is not that a word cannot somehow be explained in another language, but that part of the essence of the word is lost as it crosses from one language to another. How to Write a Novel– Part 1: Plan & Outline Course Syllabus edX: UBCx – CW1.1x. Instructors: Nancy Lee and Annabel Lyon University of British Columbia Creative Writing Program Outlining is a crucial step in the novel writing process, one that fuels creativity and prepares the writer to stay on track and avoid common pitfalls. Through hands-on weekly exercises with a focus on craft and process, as well as insights from the real- world practices of accomplished authors, this course explores the core elements of fiction writing necessary to build an outline.

38 Wonderful Foreign Words We Could Use in English Sometimes we must turn to other languages to find le mot juste. Here are a whole bunch of foreign words with no direct English equivalent. 1. Matheus Lopes Manifesto, traditional art, mixed media Building a galaxy, digital art, mixed media Alternate ending, digital art, mixed media Ace of Wands, digital art, mixed media Famous Oscar Wild quotation No man is rich enough to buy back his past The world is a stage, but the play is badly cast I don`t like principles. 25 Handy Words That Simply Don’t Exist In English Approximately 375 million people speak English as their first language, in fact it's the 3rd most commonly spoken language in the world (after Mandarin Chinese and Spanish). Interestingly enough it's the number 1 second language used worldwide - which is why the total number of people who speak English, outnumber those of any other. But whilst it's the most widely spoken language, there's still a few areas it falls down on (strange and bizarre punctuation rules aside). We look at 25 words that simply don't exist in the English language (and yet after reading this list, you'll wish they did!) 1 Age-otori (Japanese): To look worse after a haircut

Creative Writing This Specialization covers elements of three major creative writing genres: short story, narrative essay, and memoir. You will master the techniques that good writers use to compose a bracing story, populated with memorable characters in an interesting setting, written in a fresh descriptive style. You will analyze and constructively evaluate peer writing. In the Capstone, you will draft, rewrite, and complete a substantial original story in the genre of your choosing. Our courses are designed for anyone from the aspiring short story writer to established novelist. Illustrations Of Unusual And Rarely Spoken Words Recumbentibus—A knockout punch, either verbal or physical. The Irish illustration duo of James and Michael Fizgarald, or also known as The Project Twins, have come up with a series of illustrations that visually represent rarely spoken and heard of words. In their series called ‘A-Z of Unusual Words’, the meaning of the words have been visually defined in the form of a whimsical poster—which can be purchased on their website. Here are some of their ‘informative’ posters:

Y-chromosomal Adam In human genetics, Y-chromosomal Adam (Y-MRCA) is a hypothetical name given to the most recent common ancestor (MRCA) from whom all currently living people are descended patrilineally (tracing back only along the paternal or male lines of their family tree). However, the title is not permanently fixed on a single individual (see below). Y-chromosomal Adam is named after the biblical Adam, but the bearer of the chromosome was not the only human male alive during his time.[1] His other male contemporaries could also have descendants alive today, but not, by definition, solely through patrilineal descent. Analogous to Y-chromosomal Adam, Mitochondrial Eve is the woman from whom all living humans are descended matrilineally, who lived about 140,000 to 200,000 years ago in Africa.

12 Quotes From The Wisest Man in History « 1. I know nothing except the fact of my ignorance. 2.I decided that it was not wisdom that enabled poets to write their poetry, but a kind of instinct or inspiration, such as you find in seers and prophets who deliver all their sublime messages without knowing in the least what they mean. 3.Be slow to fall into friendship; but when thou art in, continue firm and constant. Wabi-Sabi: Translating the Beauty in Imperfection Wabi-sabi. It’s a concept, an aesthetic, and a worldview. It’s also a phrase that doesn’t translate directly from Japanese into English, and the ideas behind it may not immediately translate in the minds of those who haven’t encountered it before. Put simply, it’s an intuitive way of living that emphasizes finding beauty in imperfection, and accepting the natural cycle of growth and decay. The best way to learn about wabi-sabi is just to accept that it’s there – and to begin noticing examples of it in one’s daily life.