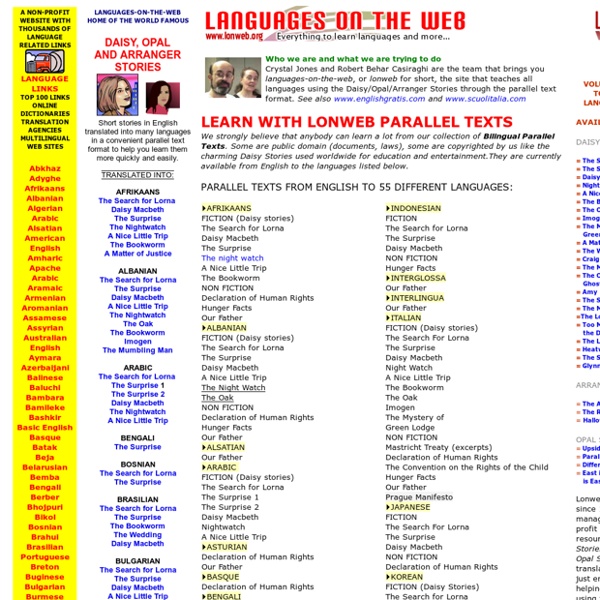 Who we are and what we are trying to do Crystal Jones and Robert Behar Casiraghi are the team that brings you languages-on-the-web, or lonweb for short, the site that teaches all languages using the Daisy/Opal/Arranger Stories through the parallel text format. See also www.englishgratis.com and www.scuolitalia.com LEARN WITH LONWEB PARALLEL TEXTS We strongly believe that anybody can learn a lot from our collection of Bilingual Parallel Texts. Some are public domain (documents, laws), some are copyrighted by us like the charming Daisy Stories used worldwide for education and entertainment.They are currently available from English to the languages listed below. If you'd like to add your own contribution to our site feel free to volunteer a translation (see our Lonweb Volunteers Program by the side). How do I say hello?

Duke University Slavic Centers : Reference Grammars This set of reference grammars has been designed for advanced-level language users and linguists to compare semantic categories across languages. Each grammar also provides background information about the language and its speakers. In some cases the author has included a topic which provides greater illumination of the language (e.g. tongue twisters, slang/profanity, or a set of exemplary texts). These sections are indicated by a shaded background in the left-side navigation pane. Please note that some of the grammars are very large, in particular Romanian and Georgian, and are best accessed through a high speed connection. Grammar Outlines

What language tells us about the roots of the stone age diet Next month, the UK’s first paleolithic restaurant will open in London. The paleo, stone-age or caveman diet has been around in various forms for decades. But it harks back to a much earlier time, when our eating habits were supposedly in line with our evolution, before agriculture came along and made us civilised but unhealthy. One of the best TEDx talks I’ve watched is an efficient debunking of the stone-age diet by Christina Warriner. In short: the meat-heavy regimen is not at all how cavemen ate, and many so-called stone-age foods – like root vegetables – are in fact the product of intensive cultivation (wild carrots, for example, are generally tiny and full of toxins).

Spanish language and culture links Asis Spanish Institute Costa RicaLearn Spanish in a private ecological reserve in the rainforest. Spanish for all levels, small groups and warm environment. Professional language services and translation services My site offers professional language services as: translation, conference interpreting and Spanish for Foreigners as core activities, among others related. Español al Sur - Institute of Spanish Language and Culture Español al Sur is a Spanish language institute located in Buenos Aires, Argentina, focussing not only on the language, but also the culture. We also offer a wide range of options in the field of the Tango and tourism. Learn Spanish on your Own A guide for the aspiring Spanish-learner that isn't able to spend thousands of dollars on an expensive immersion trip to a Spanish-speaking country.

Writing Against the Clock: 5 Tips For Writing When You Have No Time Before I had my son, I often felt like I was just a child pretending to be an adult. I would pay the mortgage, do my job, clean the house—but I never really felt like an authentic grown-up. However, becoming a mother has changed everything. Marketing is becoming more and more competitive as companies scramble Marketing is becoming more and more competitive as companies scramble to get their message across to potential customers overseas. Sometimes, companies fail to use the right marketing translation services to do a culturally aware translation for them, resulting in anything from incomprehension to derision, depending on the error. It seems as if the potential for errors in marketing translation is greater than with many other types of translation. This is probably because the sorts of slogans and logos used in marketing in English are very idiomatic.

Guide to Autodidactic Foreign Language Study Last updated: 25 March 2010 Teaching yourself languages The Shadowing Technique The Scriptorium Technique Teaching yourself languages In order to learn a foreign language well, you must always invest much focused energy using intelligent study methods and good study materials with systematic regularity over long periods of time. Humans Who Read Grammars: A Global Tree of Languages I find this tree exciting because geographical patterns emerge purely out of comparing lists of words in different languages. The four lists of words below, for example, do not seem to have much in common, but somehow the algorithm manages to correctly place A and B in Papua New Guinea, and C and D in South America. (The languages are Yabiyufa, Dubu, Nadeb and Kukua). I: nemo no u*h we*b

Aussie Translations-A leading translation agency in Australia Do you intend selling your goods in Australia? Marketing is all important for any company anywhere and the greater the competition, the more you need to market your own brand. Any company that considers expansion into an overseas population is faced with the task of getting its message across in another language, as well as another culture. Sometimes, tried and tested language translation isn’t enough. You need to use a marketing translation service that understands the peculiarities and needs of marketing in a culturally aware context.

Great Books Lists of Classic Texts from Western and Eastern Civilizations Last updated: 12 April 2010 Great Books: Definition and BackgroundGreat Books in my own Education and in Polyliteracy The Standard Canon of Great BooksPrinciples for Expanding the Canon The Expanded Comprehensive Canon for Western Civilization The Twentieth Century Waiting List The Canon for Central (Middle Eastern) Civilization The Canon for Indic Civilization The Canon for (Far) Eastern Civilization Great Books: Definition and Background Lest any may have come to this page unacquainted with the term "great books," it is simply a contemporary equivalent for "the classics," i.e., a cover term for the best works of all time, especially as is applied to the notion of a complete, holistic, humanistic, liberal, well-rounded education, in which they are to be read and discussed in seminar format. In most times and places, education has consisted precisely of developing an intimate relationship with the classic works of that civilization.

The 5 Hardest Languages for English Speakers and Why You Want to Learn Them Want to feel smart? Learn a second language. Want to feel even smarter? Learn one of the five hardest languages for English speakers. Aussie Translations-A leading translation agency in Australia Sometimes it seems that legal documents are written in their very own language. The terms and jargon used are found nowhere else or at least have a specuifc contextual meaning. No wonder that legal document translation services have to use translators that not only understand the languages they are translating, but must be familiar with the legal terminology used in both countries as well as familiar with the legal systems, too. Blogs and resources On ADS-L, Fred Shapiro posted: With the demise of the much-lamented “On Language” columns in the New York Times and Chicago Tribune [I think that modifier got displaced: “the much-lamented demise of the…”], what are remaining language columns in major newspapers or other media such as magazines, radio shows, or major blogs? Some that I know of include Boston Globe (Jan Freeman [and Erin McKean]), Visual Thesaurus (Ben Zimmer), and “A Way With Words” radio show ([Martha Barnette and] Grant Barrett). Larry Horn added Geoff Nunberg’s “Fresh Air” spots (public radio) and noted that there are many many blogs, especially Language Log. I noted the list of blogs (in addition to Language Log) that Geoff Nunberg provides on his website: Keywords, The Web of Language, Double-Tongued Dictionary, Michael Erard, LanguageHat, Fritinancy, Mr.