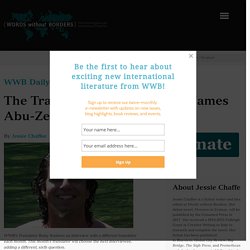 This month’s translator will choose the next interviewee, adding a different, sixth question. For September’s installment, Ming Di passed the baton to Kareem James Abu-Zeid, an award-winning translator of Arabic literature. What is your connection to the language(s) you translate from and/or the place(s) where the books you translate are written? Most of the literary projects I do are from Arabic. I do quite a bit of translating from French and German too. Ubersetzung - Translation - Traduction. 1. Teilband.

Framing Social Values: An Experimental Study of Culture and Cognition on JSTOR. Proto-Indo-European Translations and Resources - Babble Lingua. Didactic and Pedagogic Tendencies in the Norms Dictating the Translation of Children's Literature: The Case of Postwar German-Hebrew Translations on JSTOR. Jakub Marian’s Educational Blog. Learning Esperanto: Is it worth it? Es­per­anto is the most widely spoken con­struc­ted lan­guage (un­less you count Mod­ern Hebrew as a con­struc­ted lan­guage). 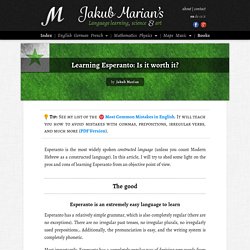 To un­der­stand why this is such a big deal, let’s take a look at an ex­ample. 14 arguments for the preservation of language. Are dying languages worth saving? Language experts are gathering at a university in the UK to discuss saving the world's endangered languages. 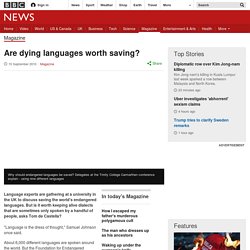 But is it worth keeping alive dialects that are sometimes only spoken by a handful of people, asks Tom de Castella? "Language is the dress of thought," Samuel Johnson once said. About 6,000 different languages are spoken around the world. But the Foundation for Endangered Languages estimates that between 500 and 1,000 of those are spoken by only a handful of people. And every year the world loses around 25 mother tongues. This week a conference in Carmarthen, west Wales, organised by the foundation, is being attended by about 100 academics. "Different languages will have their quirks which tell us something about being human," says Nicholas Ostler, the foundation's chairman. "And when languages are lost most of the knowledge that went with them gets lost. Apart from English, the United Kingdom has a number of other languages.

Last speaker dies Wicked words. Future - Languages: Why we must save dying tongues. Tom Belt, a native of Oklahoma, didn’t encounter the English language until he began kindergarten. 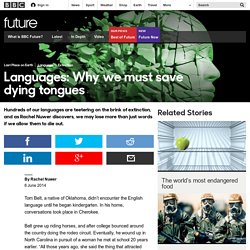 In his home, conversations took place in Cherokee. Belt grew up riding horses, and after college bounced around the country doing the rodeo circuit. Eventually, he wound up in North Carolina in pursuit of a woman he met at school 20 years earlier. “All those years ago, she said the thing that attracted her to me was that I was the youngest Cherokee she’d ever met who could speak Cherokee,” he says. “I bought a roundtrip ticket to visit her, but I never used the other end of the ticket.” The couple married. Cherokee is far from the only minority language threatened with demise. The History of English Podcast. The 10,000 Year Explosion: How Civilization Accelerated Human Evolution. 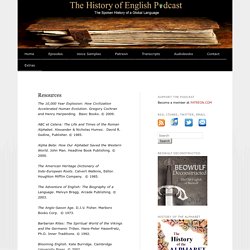 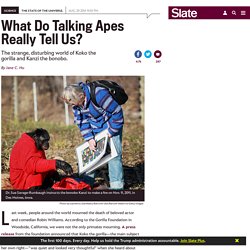 According to the Gorilla Foundation in Woodside, California, we were not the only primates mourning. A press release from the foundation announced that Koko the gorilla—the main subject of its research on ape language ability, capable in sign language and a celebrity in her own right—“was quiet and looked very thoughtful” when she heard about Williams’ death, and later became “somber” as the news sank in.

Williams, described in the press release as one of Koko’s “closest friends,” spent an afternoon with the gorilla in 2001. HL0443. Pallier.critical.period.attrition.chapter. 0910jaspall2. Shakespeare19. Xanthos et al FL in press.