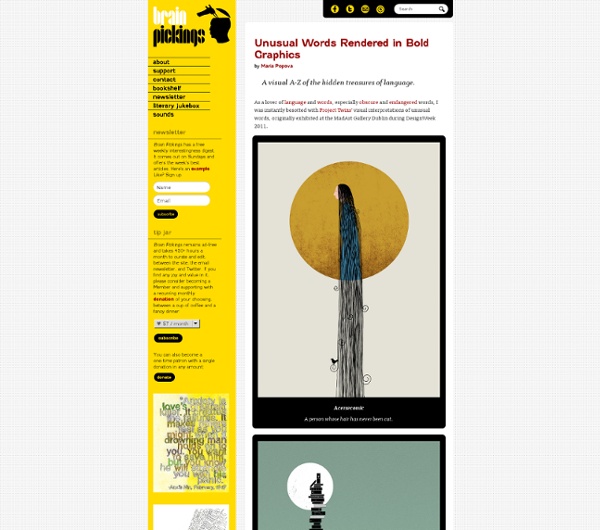 by Maria Popova A visual A-Z of the hidden treasures of language. As a lover of language and words, especially obscure and endangered words, I was instantly besotted with Project Twins’ visual interpretations of unusual words, originally exhibited at the MadArt Gallery Dublin during DesignWeek 2011. Acersecomic A person whose hair has never been cut. Biblioclasm The practice of destroying, often ceremoniously, books or other written material and media. Cacodemonomania The pathological belief that one is inhabited by an evil spirit. Dactylion An anatomical landmark located at the tip of the middle finger. Enantiodromia The changing of something into its opposite. Fanfaronade Swaggering; empty boasting; blustering manner or behavior; ostentatious display. Gorgonize To have a paralyzing or mesmerizing effect on: Stupefy or petrify Hamartia The character flaw or error of a tragic hero that leads to his downfall. Infandous Unspeakable or too odious to be expressed or mentioned. Jettatura Ktenology Leptosome Welter

Using food for thought: Intellectual hunger, thirst, and omnivorous behaviors We search for things to read to satiate our intellectual hunger or quench our thirst for knowledge. A favorite of mine is the phrase that someone is ‘intellectually omnivorous’, meaning that their intellectual diet consists of all (omni-) types of brain foods. Junkier ideas which are sweet and appealing are called brain candy. Brain candy is the idiom typically used to refer to ideas or pieces of intellectual stimulation which, like candy, give us an immediate burst of sweetness, the ‘sugar-high’ of intellectual stimulation. A discussion that is particularly important or full of content, perhaps complex, can be called a meaty discussion. Teachers who stand at the front of the classroom dictating notes on a book are said to be spoon-feeding the material to the class. Any group that tries to inculcate a particular ideology in its members might be described as shoving it down their throats. If a theory is unoriginal we might describe it as warmed-over. Ideas are amorphous.

100 Exquisite Adjectives By Mark Nichol Adjectives — descriptive words that modify nouns — often come under fire for their cluttering quality, but often it’s quality, not quantity, that is the issue. Plenty of tired adjectives are available to spoil a good sentence, but when you find just the right word for the job, enrichment ensues. Practice precision when you select words. Subscribe to Receive our Articles and Exercises via Email You will improve your English in only 5 minutes per day, guaranteed! 21 Responses to “100 Exquisite Adjectives” Rebecca Fantastic list! The Alphabet Refracted Through Backlit Letters Shot on iPhone donating = loving Brain Pickings remains ad-free and takes hundreds of hours a month to research and write, and thousands of dollars to sustain. If you find any joy and value in it, please consider becoming a Member and supporting with a recurring monthly donation of your choosing, between a cup of tea and a good dinner: (If you don't have a PayPal account, no need to sign up for one – you can just use any credit or debit card.) You can also become a one-time patron with a single donation in any amount: labors of love

How To Change User Habits With Interaction Design Jerry Cao is a content strategist at UXPin — the wireframing and prototyping app — where he develops in-app and online content for the wireframing and prototyping platform. As creatures of habit, we humans behave predictably. We avoid interactions that make us feel bad, and seek out interactions that make us feel good. The most human of the 5 interaction dimensions, behavior therefore refers to how users respond to your interface — what is happening on their side of this interaction. Source: Human Behavior In order to design for behavior, you must first know how habits form, how they can be used, and how feedback plays into each step. Use Habits to Your Advantage “We are, all of us, creatures of habit, and when the seeming necessity for schooling ourselves in new ways ceases to exist, we fall naturally and easily into the manner and customs which long usage has implanted ineradicably within us.” Edgar Rice Burroughs, The Beasts of Tarzan Forming Habits Source: Habit Cycle 3. Takeaway

Dig the favorite much!

I will definitely tell you about Greg at some point! His amazingness is humbling, actually.

I'm holding you to this fantasy Scrabble game, I hope you realize that :) by megela Aug 28

Delicious is right. I love these. I didn't know a single word which is a little humbling. I'm not sure of my favorite, perhaps "tarantism". I love the definition and totally know the feeling.

I don't have a trick to remember new words other than just trying to use the frequently. I like your idea of breaking them apart and making up stories. Was Greg truly gregarious? :)

I'm still pretty sure you'd trounce me in Scrabble. by featherking Aug 28

Wowsers! These are so clever and pack such a punch to the eyes and brain at the same time. Sweet find. Do you have a favorite? It's so hard to pick! As I scrolled I kept thinking, "And THAT one is good too!!" I knew very few of those words, which was delicious in it's own right. I love learning new words, but have a terribly short-term memory for keeping them and using them. What's your trick for that? In junior high to keep up with vocab quizes- I had to break the word down and come up with some crazy story or reference that would trigger the meaning to pop up for me. Most of the time- the more obscure the reference, the better it worked, although some quite simple ones worked just fine too. My friend Greg, who has a fantastic personality, is the only reason I remembered what gregarious meant. As a bonus, I still think of him each time I hear it :)

This would be a super fun project to work on.

You could do a sea-based series! Nautical terms would match your drawing style perfectly :)
And then I could buy your posters in your Etsy shop! #brokenrecord by megela Aug 28