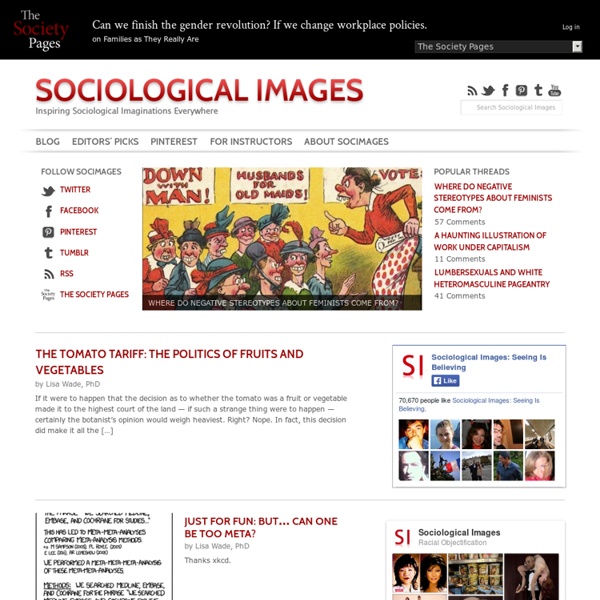 The Tomato Tariff: The Politics of Fruits and Vegetables by Lisa Wade, PhD If it were to happen that the decision as to whether the tomato was a fruit or vegetable made it to the highest court of the land — if such a strange thing were to happen — certainly the botanist’s opinion would weigh heaviest. Right? Nope. In fact, this decision did make it all the […]

Signs of the times: deaf community minds its language The letter 'A' fingerspelled in British sign language. Younger BSL users are less likely to draw attention to the eyes when describing something Chinese. Photograph: David Levene Political correctness has caught up with Britain's deaf community. It is no longer acceptable to sign a slanted eye when talking about the Chinese or to mime a hook nose when referring to Jewish people. Feminist Frequency Content Warning: This educational episode contains graphic sexual and violent game footage. In this episode we explore the Women as Background Decoration trope which is the subset of largely insignificant non-playable female characters whose sexuality or victimhood is exploited as a way to infuse edgy, gritty or racy flavoring into game worlds. These sexually objectified female bodies are designed to function as environmental texture while titillating presumed straight male players.

Ink Tank - Make words not war The ten greatest short story writers of the twenty-first century? What, we scoff, only ten? After all, the century’s fourteen already – that’s enough time to compile a list twice as long as this one! However, we’re going to restrict ourselves to ten because we’re also interested in your input: which story writers have blown your mind since the big Y2K? Why a Bible belt conservative spent a year pretending to be gay Timothy Kurek grew up hating homosexuality. As a conservative Christian deep in America's Bible belt, he had been taught that being gay was an abomination before God. He went to his right-wing church, saw himself as a soldier for Christ and attended Liberty University, the "evangelical West Point".

The Weekly Ansible Seabozu: the angsty self-aware monster of the dead themonstervault: “Monsters are tragic beings; they are born too tall, too strong, too heavy, they are not evil by choice. That is their tragedy"-Ishiro Honda Seabozu is an odd monster to begin with for the Vault, but I’ve chosen him because he embodies the meeting of the camp aspects of monster films and the more serious side.Appearing in an episode 35 of the original Ultraman series titled, “The Monster Graveyard,” the kaiju Seabozu is unlike any other being faced by Ultraman. Neo-Griot April 8, 2014 Note from BW of Brazil: Today, we take on a topic that will undoubtedly be part of any conversation about the imagery of Brazil: sex tourism. Let’s face it, Brazil has long promoted itself as a country of sexual freedom, sensuality and beautiful women. But these images often portray Brazilian women as simply another commodity available for consumption in the global economy while ignoring the fact that these persons have lives, challenges and aspirations.

Begum Hazrat Mahal Begum Hazrat Mahal (Urdu: بیگم حضرت محل‎ born c. 1820- died on 7 April 1879),[1] also known as Begum of Awadh, was the first wife of Nawab Wajid Ali Shah.[2] She rebelled against the British East India Company during the Indian Rebellion of 1857. After her husband had been exiled to Calcutta, she took charge of the affairs in the state of Awadh and seized control of Lucknow. She also arranged for her son, Prince Birjis Qadir, to become Wali (ruler) of Awadh; However, he was forced to abandon this role after a short reign. She finally found asylum in Nepal where she died in 1879.[3]

Amanda Palmer Gets Naked In Response To Daily Mail Nipple Story When the UK’s Daily Mail tabloid paper covered Amanda Palmer’s recent performance at Glastonbury, they didn’t mention anything about the music that she played, choosing to entirely focus on a brief moment where her breast “escaped her bra”. Palmer wasn’t entirely thrilled about the lack of coverage her performance received and the extent of attention that was paid to her so-called wardrobe malfunction and she has decided to respond to the paper through song. At a performance at London’s Roundhouse on Friday night, Palmer performed a song in response to the tabloid and urged audience members to film it and upload the clip to YouTube so her chosen response could spread.

Slingshot! By Quinn Ginger The outskirts of Buenos Aires are grim and cluttered, and our route out of the city was lined with weathered billboards stuck like hectic postage on every flat surface. In contrast with the sleek, tech driven city center, the rim of Buenos Aires is still deeply industrial. It's a place where workers sell the hours in their day for a wage and spend the majority of their waking lives inside a factory answering to a boss. I was there to seek out another way to conduct business; One that provides lives and livelihoods separate from the hierarchical wage system, which for the past 12 years since the economic collapse has been growing in the rubble, inside large warehouses and dusty offices. For the past two months, I have been visiting, interviewing and working with the worker-owners of Argentina's empresasa recuperadas, or "taken factories".

A queen's message to girls: More than tiaras and cupcakes To be born a girl in Afghanistan is often to be ushered into a life of servitude, where girls have very little worth and very dim futures. Amina is forced to marry at 12, to bear a child though still a child herself -- while her own brother is given her dowry money to buy a used car. But Amina, whose name was changed and story portrayed by an actress out of concern for her safety, has had enough, and she is fighting back. CNN Films' "Girl Rising" tells the stories of Amina and other girls from around the world and how the power of education can change the world. Learn more about the girls' inspiring stories. Is Henry Jaglom the real Woody Allen? IRENE IN TIME opens; Q&A w/ filmmaker Henry Jaglom (shown below, right, with his new leading lady Tanna Frederick) may be an acquired taste. It took TrustMovies awhile before he realized how hooked he'd become on this guy's films. Now, he can't wait for the next one to pop up -- which it does, every couple or three years.