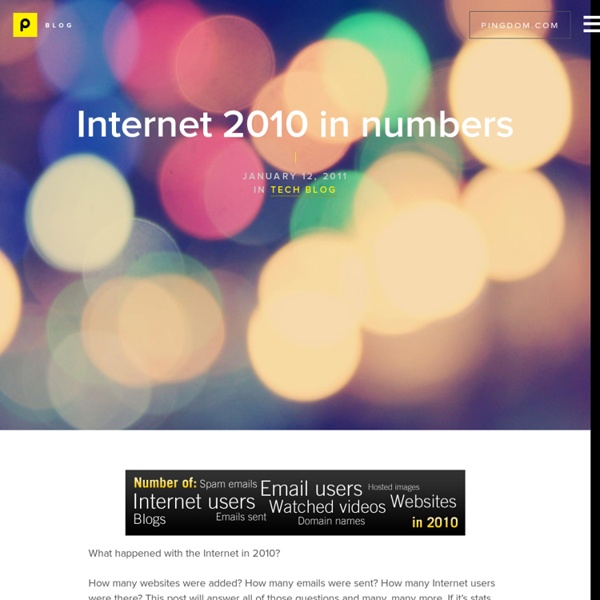 Internet 2009 in numbers What happened with the Internet in 2009? How many websites were added? How many emails were sent? The Nuts &amp; Bolts of 21st Century Teaching This is the sixth time I’ve taught a unit on the Holocaust, each one slightly different than the last. In the past, my students learned most of the information via lecture, notes and videos. Because I was responsible for distilling the information, I learned much more than they did. This semester they’re doing it all themselves. And the end result will be a classroom Holocaust museum curated by my grade 10 English students. The unit involves inquiry, collaborative, and project-based learning all in one.

The Number Resource Organization NRO Extended Allocation and Assignment Reports The file delegated-extended contains a daily updated report of the distribution of Internet number resources. The resources reported are: IPv4 address ranges (IPv4)IPv6 address ranges (IPv6)Autonomous System Numbers (ASNs) 100 Google Search Tricks for the Savviest of Students In today’s schools, most research is completed online, and Google is a great resource for combing the web. But at the same time, it’s not always easy to find exactly what you want, given that there are usually millions of results — with varying degrees of accuracy. These tricks can help you find the best results, while saving time and making your life easier. General These simple tricks will help you get what you want, faster. Reference

Internet in numbers: How many of us are there online? Pingdome provides us every year with the most interesting numbers and statistics, concerning global internet use. This is the case for 2011 too and here are are the numbers of internet and the "connected" world in general. Internet users - Research Supporting the Benefits of Technology In Reading and Writing 0 Comments November 2, 2011 By: Lisa Nielsen Nov 2 Written by: 11/2/2011 2:49 AM Internet 2011 in numbers So what happened with the Internet in 2011? How many email accounts were there in the world in 2011? How many websites? How Big Is the Web & How Fast Is It Growing? There's no easy way to find out or explain the size of the web. After all, though there are a few governing bodies and consortia, there's no real central control system for the Internet. No one really knows with 100% certainty exactly how many websites exist, for example, or how many new websites are set up each day. However, a few organizations do make it their business to keep an eye on the domain names that make up the Internet as the web continues its rapid sprawl throughout the infinite expanses of cyberspace.

Web Server Survey In the April 2014 survey we received responses from 958,919,789 sites — 39 million more than last month. Microsoft made the largest gain this month, with nearly 31 million additional sites boosting its market share by 1.9 percentage points. IIS is now used by a third of the world's websites.