Standard error of the mean 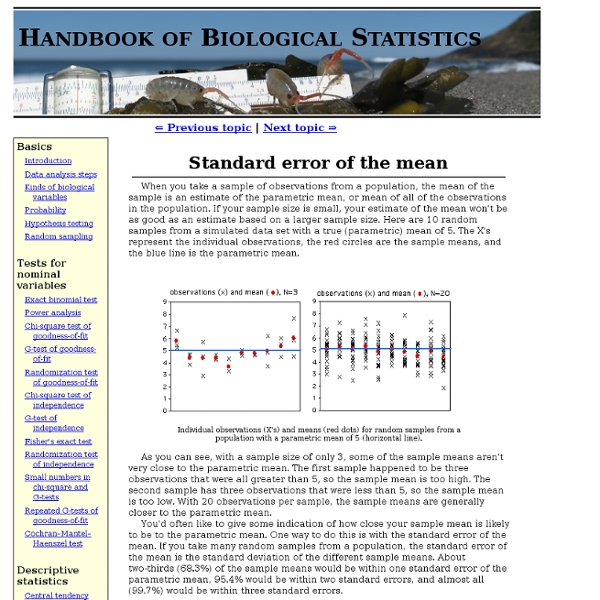 When you take a sample of observations from a population, the mean of the sample is an estimate of the parametric mean, or mean of all of the observations in the population. If your sample size is small, your estimate of the mean won't be as good as an estimate based on a larger sample size. Here are 10 random samples from a simulated data set with a true (parametric) mean of 5. The X's represent the individual observations, the red circles are the sample means, and the blue line is the parametric mean. As you can see, with a sample size of only 3, some of the sample means aren't very close to the parametric mean. You'd often like to give some indication of how close your sample mean is likely to be to the parametric mean. Here's a figure illustrating this. Usually you won't have multiple samples to use in making multiple estimates of the mean. This figure is the same as the one above, only this time I've added error bars indicating ±1 standard error. Similar statistics Example Web pages

Particles found to break speed of light Living Earth Simulator will simulate the entire world Described as a “knowledge collider,” and now with a pledge of one billion euros from the European Union, the Living Earth Simulator is a new big data and supercomputing project that will attempt to uncover the underlying sociological and psychological laws that underpin human civilization. In the same way that CERN’s Large Hadron Collider smashes together protons to see what happens, the Living Earth Simulator (LES) will gather knowledge from a Planetary Nervous System (PNS — yes, really) to try to predict societal fluctuations such as political unrest, economic bubbles, disease epidemics, and so on. The scale of the LES, when it’s complete, will be huge. It is hoped that supercomputing centers all over the world will chip in with CPU time, and data will be corralled from existing projects and a new Global Participatory Platform, which is basically open data on a worldwide scale. The timing of EU’s billion-euro grant is telling, too. Read more at FuturICT

SpaceX Craft Docks With Space Station; Commercial Era Begins : The Two-Way The historic first docking of a commercial spacecraft at the International Space Station orbiting above Earth happened without a hitch today, as SpaceX's Dragon capsule arrived with supplies for the crew orbiting high above Earth. Just before 10 a.m. ET, astronauts aboard the space station successfully grabbed the capsule with a robotic arm. A little after noon ET, the pulled the Dragon into its docking space. NASA was webcasting, and we have embedded its feed in this post (our apologies if you're on a device that doesn't support the player). Earlier this week on All Things Considered, NPR's Nell Greenfieldboyce reported about the historic mission. Update at 12:10 p.m. Dragon has finished docking with the International Space Station. That happened at exactly 12:02 p.m. Update at 10:40 a.m. Capturing Dragon "was a big moment for SpaceX and a big moment for NASA too," NPR's Nell Greenfieldboyce said on Morning Edition a short time ago. Update at 10:15 a.m. Update at 9:56 a.m.