Official media are often blamed by activists and even pro-government onlookers for failing to do their reporting duties. Suicide bombings that shifted into the capital Damascus in the past week were not reported by the Syrian media as state TV and radios stuck to their regular programing, broadcasting their regular entertainment shows and dodging reports on the casualties and aftermath damage. More than seven suburbs in Damascus witnessed explosions within a week, but the official media only reported on two. The Citizen Journalist Show: Rape Victim speaks out Video Online - CNN-IBN-Live-News-Watchonline. The story of two Chinese citizen journalists. A new documentary about two Chinese citizen journalists was presented earlier this month during the Human Rights Weekend 2013 in Amsterdam. 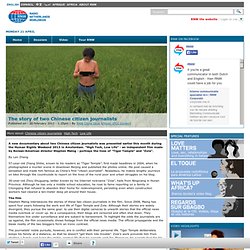 "High Tech, Low Life" - an independent film made by Korean-American director Stephen Maing - portrays the lives of “Tiger Temple” and “Zola”. 57-year-old Zhang Shihe, known to his readers as “Tiger Temple”, first made headlines in 2004, when he photographed a murder scene in downtown Beijing and published the photos online. His post caused a sensation and made him famous as China's first "citizen journalist".

Nowadays, he makes lengthy journeys on bike through the countryside to report on the lives of the rural poor and urban struggles on his blog. Syrian citizen journalists questioning power of cameras. Citizen journalists in Syria are questioning the ability of their cameras to beat the power of guns during the ongoing revolution and violence in the country according to a report by AFP. 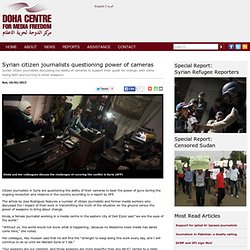 The article by Jose Rodriguez features a number of citizen journalists and former media workers who discussed the l impact of their work in transmitting the truth of the situation on the ground versus the power of weapons to bring about change. Kinda, a female journalist working in a media centre in the eastern city of Deir Ezzor said “we are the eyes of the world.” “Without us, the world would not know what is happening...because no Westerne news media has dared come here,” she noted. Her colleague, Abu Hussein said that he still find the “strength to keep doing this work every day, and I will continue to do so until we liberate Syria or I die.” “Our weapons are our cameras, and those weapons are more powerful than any AK-47 carried by a rebel. Idea Citizen Journalist - Fearless Life. Unemployed Portuguese photographer wins World Press Photo award. A young unemployed Portuguese photographer has won a prestigious World Press Photo award, in the category of ‘Daily Life’, for a picture he took of young children playing football barefoot in Guinea-Bissau. 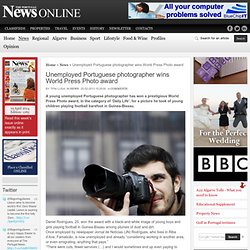 Daniel Rodrigues, 25, won the award with a black-and-white image of young boys and girls playing football in Guinea-Bissau among plumes of dust and dirt.Once employed by newspaper Jornal de Notícias (JN) Rodrigues, who lives in Riba d’Ave, Famalicão, is now unemployed and already “considering working in another area, or even emigrating, anything that pays.” “There were cuts, fewer services (…) and I would sometimes end up even paying to work, because when you’re on green receipts tax is discounted and in the end it doesn’t compensate”, he explained.On occasions Daniel Rodrigues has had to sell some of the equipment that provides his meager income, because “the bills keep falling on the doormat” and because he needed to “survive.”

Citizen Journalist Report: The Enemy within the Family. The Citizen Journalist Show: Rape Victim speaks out. News Releases > Citizen Journalist Awards: Empowering agents of change. MUMBAI: Promoting the principles of inclusive journalism, these awards honour individuals who are determined to uncover the truth, expose injustice, change the system, and in the process, help create a better India for themselves and their countrymen Once again, it’s time to honour the agents of change who stop at nothing to fight for their rights and of those around them. 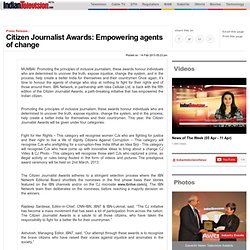 IBN Network, in partnership with Idea Cellular Ltd, is back with the fifth edition of the Citizen Journalist Awards, a path-breaking initiative that has empowered the Indian citizen. Promoting the principles of inclusive journalism, these awards honour individuals who are determined to uncover the truth, expose injustice, change the system, and in the process, help create a better India for themselves and their countrymen. This year, the Citizen Journalist Awards will be given under four categories: 19 Resources to Improve Your Photo and Video Skills. Everyone's a photographer these days. 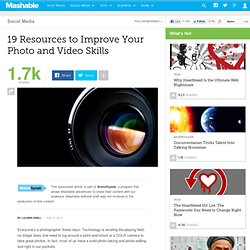 Technology is leveling the playing field; no longer does one need to lug around a point-and-shoot or a DSLR camera to take great photos. In fact, most of us have a solid photo-taking and photo-editing tool right in our pockets. But as you take more photos and shoot more videos, you might want to know how to do more with the tools you have. Flickr Photo of Insect Identified As Never-Before-Seen Species. When wildlife photographer Hock Ping Guek posted a picture of a delicate fly with patches of color on its wings to photo-sharing site Flickr, he didn't know he had come across a never-before-seen species of lacewing. 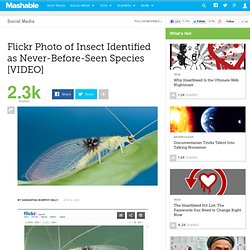 Guek uploaded the picture after photographing the lacewing last year in a forest in Selangor, Malaysia. Entomologist Shaun Winterton contacted him months later, when he spotted the picture online, and identified it as an entirely new lacewing species. Guek sent a sample of the insect to Winterton for testing, and scientific journal ZooKeys recently published results of the findings. "I first saw and photographed this species in the wild in its natural habitat on May 10, 2011," Guek wrote on his blog. "A few lacewing experts informed me that this could be a new species.

SEE ALSO: 5 Tips to Take Food Photos Good Enough to Eat. Citizen Journalists vs. Establishment Zombie Media & Gov't Police Goons. Win in NYPD case against OWS due to video footage. Vyclone: Video Collaboration for Citizen Journalists. 2011 was a tumultuous year for the Middle East, but the troubles also served as a reminder of the role technology can play in giving everyone a voice. 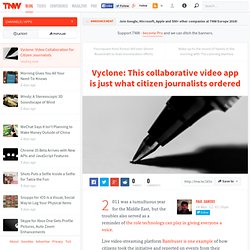 Live video-streaming platform Bambuser is one example of how citizens took the initiative and reported on events from their own perspective, often from positions unreachable by traditional media outlets. ACLU-NJ Police Tape. Situation: You are in charge of a unit dispatched to take care of a hostage situation. 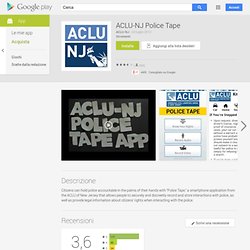 TapIn.tv. Skype trojan targets citizen journalists in Syria. A new Trojan malware infecting Skype videoconferencing software may be used to spy on others – particularly in Syria, an electronic freedom group warned this week. 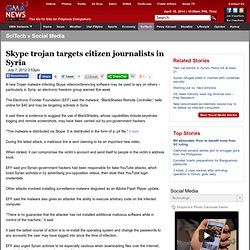 The Electronic Frontier Foundation (EFF) said the malware, “BlackShades Remote Controller,” sells online for $40 and may be targeting activists in Syria. It said there is evidence to suggest the use of BlackShades, whose capabilities include keystroke logging and remote screenshots, may have been carried out by pro-government hackers. “This malware is distributed via Skype. Central Brooklyn Organizers Mine Citizen Journalism for Photo A Day Project. View Full Caption Brooklyn Movement Center. With one photo a day, citizen journalism project rallies a community. Armed with cell phones, locals in some New York City neighborhoods are documenting the changes as they head to work, talk with their neighbors and play with their kids. The photo-a-day project, started by the Brooklyn Movement Center, a New York City-based community organizing group, aims to capture those quotidian changes and start conversations about city life as the photos are shared with social media.

This is evidenced by the dozens of journalists who were either beaten up, detained or had their equipment confiscated during last Saturday’s Bersih 3 Rally in Kuala Lumpur. Gan was speaking to a congregation of journalists from various Medias and supporters who had gathered in front of the Malaysiakini headquarters this morning to commemorate the World Press Freedom Day 2012. Loading ... Map Data Map data ©2014 Google, MapIT Map. The Citizen Journalist Show This Week.

17 killed in Butuan City fire. Loading the player... BUTUAN CITY, Philippines—An inferno at a three-story garment store in this southern Philippine city before dawn Wednesday killed 17 employees, most of whom were women who were asleep and trapped on the top floor, officials said. The number of casualties was previously placed at 13 but police scouring the gutted building along Montilla Boulevard found four more bodies, Superintendent Martin Gamba, Caraga police spokesman, said.

The blaze, which started shortly before 4 a.m., reached the general alarm before it was put out at 6:15 a.m., said Gamba. Store employee Mylene Tulo, who escaped with two co-workers, said she was roused from sleep as the fire spread rapidly in the third-floor office where they slept. Amid the inferno and yells for help, she managed to dash out with her colleagues. “We wanted to rouse others from sleep, but the fire was already too strong,” a stunned Tulo said. Ustream is pissed about DDOS attack, may launch Russian site tomorrow. Ustream is undergoing what chief executive Brad Hunstable says is the “largest and most coordinated DDOS attack Ustream has ever seen” today, and the team is pissed. Ustream outage due to DDoS aimed at citizen journalist. MY - Citizen Journalist Malaysia. Northcliffe signs deal with UGC video network Newsflare. An example of a video assignment that can be set by Northcliffe Digital and sent to the Newsflare community.