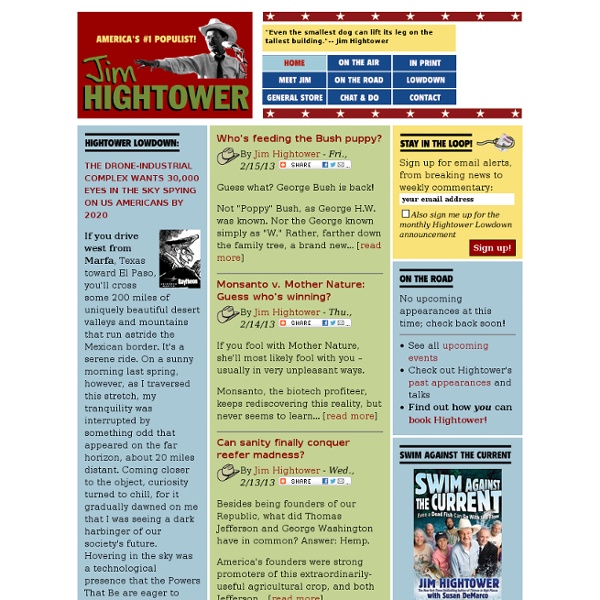 Hullabaloo This Is Hell! Rolling Stone Politics | Taibblog | Matt Taibbi on Politics and the Economy Thank You, Rolling Stone | BLOG ENTRY Today is my last day at Rolling Stone. As of this week, I’m leaving to work for First Look Media, the new organization that’s already home to reporters like Glenn Greenwald, Jeremy Scahill and Laura Poitras. I’ll have... February 20, 2014 10:35 AM ET Ex-Morgan Stanley Chief Jams Foot in Mouth, Complains of CEO Abuse | BLOG ENTRY There's a ton of interesting stuff going on in the Wall Street sphere of late – I'm trying to find some time to do a proper write-up of the extraordinary lawsuit just filed by the Better Markets... Democrats Must Stop Ted Cruz's Hollywood Ending | BLOG ENTRY Having lived in the former Soviet Union for 10 years, I will forever have plastered to the back of my cerebellum the commemorative bumper sticker: "WWSD?"

TomDispatch Sam Harris Dissent Magazine Jeremy Scahill With drone strikes and kill lists, the president set a dangerous precedent. How three US citizens were killed by their own government in the space of one month in 2011. Within some military and intelligence circles, it was the CIA director's relationship with JSOC—not Paula Broadwell—that raised concerns. Luego de que sus partidarios cuestionaran la legalidad de la corte que lo condenó, Abdulelah Haider Shaye debería haber sido puesto en libertad. After supporters protested his “sham” trial, Abdulelah Haider Shaye would have been pardoned. How US counterterrorism operations ignited an Islamist uprising. How US proxy wars helped create a militant Islamist threat. Renditions, an underground prison and a new CIA base are elements of an intensifying US war, according to a Nation investigation in Mogadishu. Meet the Special Operations unit that killed Osama bin Laden. If President Saleh falls, the US will have lost a pliant partner in its “global war on terror.”

The BRAD BLOG The Official Paul Krugman Web Page News!! I am starting up my Princeton web site. It is at www.wws.princeton.edu/~pkrugman/ It's only partial, but eventually all files will move. I'm back! What's newArticles in FortuneArticles in SlateOther writingStuff that is harder to readAdditional biographical infoWhat I look like My honorary degree ceremony in Berlin (text of talk, audio, video) Special page on Japan (direct links to Japan-related pieces) Some favorite links (updated)The unofficial page (A fan has set this up: I disavow any knowledge of his actions) Welcome to my home page. Most people who have accessed this page probably know who I am, but for anyone else here is a summary. I have written or edited 18 books (I think) and several hundred articles. With any luck, you will find many of these pieces extremely annoying. But read the articles and judge for yourself. Articles Stuff that is harder to read" What happened to Asia? Copyright © 1997 Massachusetts Institute of Technology

The Lie Factory It's a crisp fall day in western Virginia, a hundred miles from Washington, D.C., and a breeze is rustling the red and gold leaves of the Shenandoah hills. On the weather-beaten wood porch of a ramshackle 90-year-old farmhouse, at the end of a winding dirt-and-gravel road, Lt. Colonel Karen Kwiatkowski is perched on a plastic chair, wearing shorts, a purple sweatshirt, and muddy sneakers. Two scrawny dogs and a lone cat are on the prowl, and the air is filled with swarms of ladybugs. So far, she says, no investigators have come knocking. Not from the Central Intelligence Agency, which conducted an internal inquiry into intelligence on Iraq, not from the congressional intelligence committees, not from the president's Foreign Intelligence Advisory Board. Until now, the story of how the Bush administration produced its wildly exaggerated estimates of the threat posed by Iraq has never been revealed in full. Both Wolfowitz and Feith have deep roots in the neoconservative movement.

Chris Hedges, Columnist Chris Hedges Chris Hedges, whose column is published weekly on Truthdig, has written 11 books, including the New York Times best seller “Days of Destruction, Days of Revolt” (2012), which he co-authored with the cartoonist Joe Sacco. Some of his other books include “Death of the Liberal Class” (2010), “Empire of Illusion: The End of Literacy and the Triumph of Spectacle” (2009), “I Don’t Believe in Atheists” (2008) and the best selling “American Fascists: The Christian Right and the War on America” (2008). His book “War Is a Force That Gives Us Meaning” (2003) was a finalist for the National Book Critics Circle Award for Nonfiction. Hedges previously spent nearly two decades as a foreign correspondent in Central America, the Middle East, Africa and the Balkans. Hedges was part of the team of reporters at The New York Times awarded a Pulitzer Prize in 2002 for the paper’s coverage of global terrorism. Hedges is a senior fellow at The Nation Institute in New York City.