Nieman Journalism Lab » Pushing to the Future of Journalism 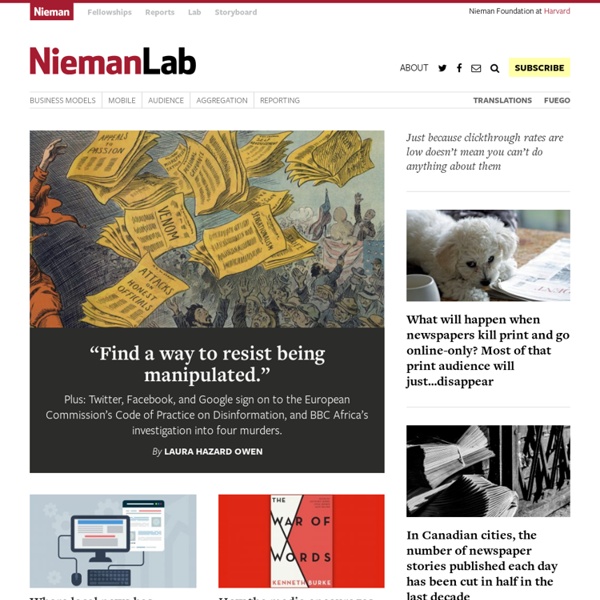 What USA Today Sports learned covering the Final Four on Periscope and Snapchat There’s no shortage of ways to reach new audiences — the challenge is figuring out which are worth investing time in and what to do with them. At USA Today Sports, where I work, two platforms we’re trying to better understand and implement into our strategies are Snapchat and Periscope. The latter launched just two weeks ago, right before college basketball’s Final Four. Easy Chart Builder plugin for WordPress Easy Chart Builder makes it easy to incorporate sophisticated review charts and graphs directly within a post, page, and even a widget. Hey, its free. Try it out. Forget the lonely genius myth, creativity is about opening your world (with images) · Gullibear We made it pretty clear that the only way to come up with great solutions, innovative answers is to share it with others. Don't just share it with your friends, if you want genuine innovation, share it with people you don't know, who belong to other groups, who will be able to give you new insights. The last important point that came up in the research is the critical role of feedback loops. Creators always asked for feedback, which allowed them to persist on what they did or to see their work differently. This is why if you're working on a project or have an idea in your head, the best thing to do is to create a page on gullibear, get it out there and start to connect with new people that share your passion.

Homely men who misbehave can't win for losing: Attractiveness influences online daters, jurors Women tolerate an unattractive man up to a point, but beware if he misbehaves. Then they'll easily shun him. So say Jeremy Gibson and Jonathan Gore of the Eastern Kentucky University in the US, after finding that a woman's view of a man is influenced by how handsome and law-abiding he is. Their study in Springer's journal Gender Issues has significance for those using dating sites or doing jury duty. Discovering how someone can make a positive first impression is an important field of study because of its role in forming relationships. It is often based on physical appearance and whether someone sticks to social norms or not. Autoriser les publicités acceptables dans Adblock Plus This page is under review as management of the Acceptable Ads initiative has been transferred to the independent Acceptable Ads Committee. What are Acceptable Ads? Acceptable Ads are ads that aren’t intrusive or annoying. They are respectful, don’t interfere with content, and are clearly labeled with the word “advertisement” or its equivalent. In order for an ad to be an “Acceptable Ad”, it must adhere to standards that have been set forth by the Acceptable Ads Committee. Ads that abide by Acceptable Ads standards are placed on a whitelist.

econsultancy The BBC has finally switched off its old desktop site and is now redirecting mobile users away from its .m site to its brand new fully responsive news site. BBC News’s previous iteration was four years old, and although it regularly broke records for attracting worldwide traffic (64m unique visitors in January 2013) the site has been need of a multi-screen compatible upgrade for some time. In fact since inviting users to trial a beta version of the new site in December, BBC News has seen 65% of its users now accessing the site from tablets and mobiles. On Monday 23 March at 2pm, BBC News switched off the old site for good and also began redirecting mobile users from its two and a half year-old specific mobile site to this single solution design.

Thinglink : 7 façons pour les journalistes d’utiliser l’image interactive Toute l'actualité amaytoisewww.lavenir.net Bloc Etat-Majorwww.lavenir.net Une salle de sport sera construite ici ViziCities development diary #1: One month in Update: The second Developer Diary is out Just over a month ago I announced ViziCities, the latest project from Pete Smart and myself. We're not quite ready to release it yet but make sure you sign up for the beta to be the first to use it. In the meantime, let me fill you in on what we've been up to this past month. Note: This entry is focussed on the development side of ViziCities.