How to Hunt Elephants 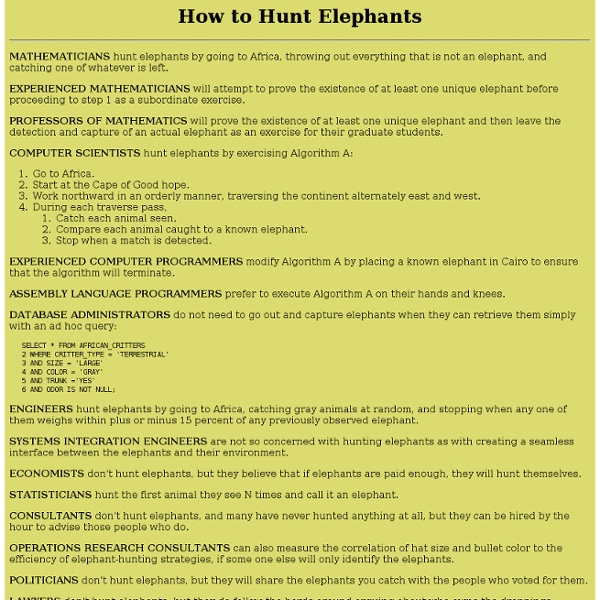 MATHEMATICIANS hunt elephants by going to Africa, throwing out everything that is not an elephant, and catching one of whatever is left. EXPERIENCED MATHEMATICIANS will attempt to prove the existence of at least one unique elephant before proceeding to step 1 as a subordinate exercise. PROFESSORS OF MATHEMATICS will prove the existence of at least one unique elephant and then leave the detection and capture of an actual elephant as an exercise for their graduate students. COMPUTER SCIENTISTS hunt elephants by exercising Algorithm A: Go to Africa. EXPERIENCED COMPUTER PROGRAMMERS modify Algorithm A by placing a known elephant in Cairo to ensure that the algorithm will terminate. ASSEMBLY LANGUAGE PROGRAMMERS prefer to execute Algorithm A on their hands and knees. DATABASE ADMINISTRATORS do not need to go out and capture elephants when they can retrieve them simply with an ad hoc query: STATISTICIANS hunt the first animal they see N times and call it an elephant.

NIST Expands Database of Common Coding Errors to Detect Software Bugs - Security The National Institute of Standards and Technology expanded its database of software flaws to help developers avoid introducing bugs into their code right from the start. The Software Assurance Metrics and Tool Evaluation (SAMATE) Reference Dataset contains examples of software issues that could leave applications vulnerable to attackers. Version 4.0 of SAMATE, released Nov. 22, contains 175 broad categories of weaknesses with over 60,000 specific cases, more than doubling the number of categories that were included in the previous release. SAMATE was launched in 2004 to improve software assurance by making it easier to identify and exclude known issues. The database helps developers test software offerings for known security vulnerabilities before going to market.

Silent disco 50 Kick-Ass Websites You Need to Know About It's time to update the entries in your browser's links toolbar. But with recent estimates putting the size of the internet at well more than 100 million distinct websites, it's getting harder and harder to get a handle on all the great stuff that's out there. That's why we've compiled this list. You might have heard of some of these sites, but we'll bet you haven't heard of all them. Demoscene.tv See What Can Be Done with 4 Kilobytes If you’re any kind of nerd at all, you probably know about the demoscene, where talented programmers create complex videos rendered in real-time, stored in incredibly small files. But what if you just want to see what all the fuss is about without actually downloading and running an executable? lite.Facebook.com Clutter-Free Social Networking You can admit it. Letsplayarchive.com Let other people play games for you Soyouwanna.com What They Didn’t Teach You in School Google Building Maker Crowd Sourcing the 3D World Ikeahacker.blogspot.com

Humor - How to Shoot Yourself In the Foot Using Any Programming Language The proliferation of modern programming languages (all of which seem to have stolen countless features from one another) sometimes makes it difficult to remember what language you're currently using. This guide is offered as a public service to help programmers who find themselves in such dilemmas. 370 JCL You send your foot down to MIS with a 4000-page document explaining how you want it to be shot. Ada After correctly packaging your foot, you attempt to concurrently load the gun, pull the trigger, scream, and shoot yourself in the foot. APL You shoot yourself in the foot, then spend all day figuring out how to do it in fewer characters. ASP.NET Find a gun, it falls apart. Assembly You try to shoot yourself in the foot only to discover you must first reinvent the gun, the bullet, and your foot. brainfuck Just looking at the gun gives you a migrane, so forget about actually shooting it. BASIC Shoot yourself in the foot with a water pistol. Forth Foot in yourself shoot.

Hacking the Xbox Quiet Party Quiet Parties (also known as Silent Parties and as Silent Dating parties) are nightclub events where participants socialize by writing notes to each other instead of speaking. The single rule at these events is "no talking." History[edit] The concept is believed to have been created in 2002 by artist Paul Rebhan and musician Tony Noe, two friends who visited several bars in New York City in an attempt to have a conversation, only to find they could not hear each other speak at any bar because of loud music and loud talking. This experience prompted them to invent the concept of 'silent nightclubbing'. The first Quiet Party probably occurred in October, 2002 in New York City, and spread to other cities including San Francisco, Washington, Houston, Paris, London, Berlin, Barcelona and Beijing. Quiet Parties arrived as one of the first of a new wave of unorthodox social activities of the early 2000s that merged elements of traditional party promotion with aspects of performance art.

How Graphics Cards Work" The images you see on your monitor are made of tiny dots called pixels. At most common resolution settings, a screen displays over a million pixels, and the computer has to decide what to do with every one in order to create an image. To do this, it needs a translator -- something to take binary data from the CPU and turn it into a picture you can see. Unless a computer has graphics capability built into the motherboard, that translation takes place on the graphics card. A graphics card's job is complex, but its principles and components are easy to understand. Think of a computer as a company with its own art department. A graphics card works along the same principles. Creating an image out of binary data is a demanding process. The graphics card accomplishes this task using four main components: Next, we'll look at the processor and memory in more detail.

What every computer science major should know Portfolio versus resume Having emerged from engineering and mathematics, computer science programs take a resume-based approach to hiring off their graduates. A resume says nothing of a programmer's ability. Every computer science major should build a portfolio. A portfolio could be as simple as a personal blog, with a post for each project or accomplishment. Contributions to open source should be linked and documented. A code portfolio allows employers to directly judge ability. GPAs and resumes do not. Professors should design course projects to impress on portfolios, and students, at the conclusion of each course, should take time to update them. Examples Technical communication Lone wolves in computer science are an endangered species. Modern computer scientists must practice persuasively and clearly communicating their ideas to non-programmers. Unfortunately, this is not something fixed with the addition of a single class (although a solid course in technical communication doesn't hurt). Java