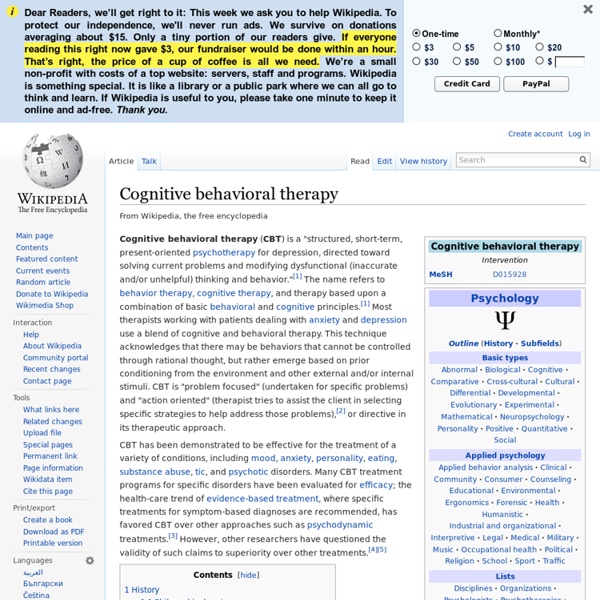 CBT has been demonstrated to be effective for the treatment of a variety of conditions, including mood, anxiety, personality, eating, substance abuse, tic, and psychotic disorders. Many CBT treatment programs for specific disorders have been evaluated for efficacy; the health-care trend of evidence-based treatment, where specific treatments for symptom-based diagnoses are recommended, has favored CBT over other approaches such as psychodynamic treatments.[3] However, other researchers have questioned the validity of such claims to superiority over other treatments.[4][5] History[edit] Philosophical roots[edit] Precursors of certain fundamental aspects of CBT have been identified in various ancient philosophical traditions, particularly Stoicism.[6] For example, Aaron T. Behavior therapy roots[edit] At the same time this of Eysenck's work, B.F. The emphasis on behavioral factors constituted the "first wave" of CBT.[15] Cognitive therapy roots[edit] Behavior and Cognitive Therapies Merge[edit]

Hans Eysenck Hans Jürgen Eysenck (4 March 1916 – 4 September 1997) was a psychologist born in Germany, who spent his professional career in Great Britain. He is best remembered for his work on intelligence and personality, though he worked in a wide range of areas. At the time of his death, Eysenck was the living psychologist most frequently cited in science journals.[1] Life[edit] Dialectical behavior therapy Dialectical behavior therapy (DBT) is a therapy designed to help people change patterns of behavior that are not effective, such as self-harm, suicidal thinking and substance abuse. This approach works towards helping people increase their emotional and cognitive regulation by learning about the triggers that lead to reactive states and helping to assess which coping skills to apply in the sequence of events, thoughts, feelings and behaviors that lead to the undesired behavior. DBT assumes that people are doing the best that they can, but either are lacking the skills or are influenced by positive or negative reinforcement that interfere with one’s functioning. DBT is a modified form of cognitive-behavioral therapy that was originally [timeframe?] developed by Marsha M.

5 Steps to Getting Unstuck and Pursuing Your Goals Jordan English Gross is the Founder/COO of Saber Seven, a new media company developing sites like Dorthy.com connecting people with content. He blogs at blog.dorthy.com and can be reached using @jordanenglish. Mashable is no stranger to the hundreds of Getting Things Done (GTD) services out there, each one more helpful than the next in keeping your to-do lists handy and tidy. But with each new tool, we’re looking for services that will help us get closer to actually achieving our goals rather than just, well, making lists. Rational emotive behavior therapy History[edit] Precursors of certain fundamental aspects of REBT have been identified in various ancient philosophical traditions, particularly Stoicism.[9] For example, Ellis' first major publication on rational therapy describes the philosophical basis of REBT as the principle that a person is rarely affected emotionally by outside things but rather by ‘his perceptions, attitudes, or internalized sentences about outside things and events.' He adds, This principle, which I have inducted from many psychotherapeutic sessions with scores of patients during the last several years, was originally discovered and stated by the ancient Stoic philosophers, especially Zeno of Citium (the founder of the school), Chrysippus [his most influential disciple], Panaetius of Rhodes (who introduced Stoicism into Rome), Cicero, Seneca, Epictetus, and Marcus Aurelius.

Aria E. Appleford I happen to disagree with this statement. This is not a criticism on the people who posted the poster from Facebook – Changeyourthoughtstoday, or whoever made the poster, or even Iyanla Vanzant. It is a criticism of what the quote is saying. Edward C. Tolman Edward Chace Tolman (April 14, 1886 – November 19, 1959) was an American psychologist. He was most famous for his studies on behavioral psychology. Background[edit] Born in West Newton, Massachusetts, brother of CalTech physicist Richard Chace Tolman, Edward C. Tolman studied at the Massachusetts Institute of Technology, and received his Ph.D. from Harvard University in 1915.

New Year, new you: what are the best self-help books? Great for emotional and career dilemmas. Might feel glib if you have serious emotional problems. Who wrote it?