How Conversations Around Campfire Might Have Shaped Human Cognition And Culture. Science Points to the Single Most Valuable Personality Trait. Research is pointing to conscientiousness as the one-trait-to-rule-them-all in terms of future success, both career-wise and personal. Via How Children Succeed: Grit, Curiosity, and the Hidden Power of Character: “It would actually be nice if there were some negative things that went along with conscientiousness,” Roberts told me. “But at this point it’s emerging as one of the primary dimensions of successful functioning across the lifespan. Social, Not (Just) Social Media. Feb 3 2014 | Loyalty Management: Articles Type Back To Results Many loyalty programs in operation today were conceived and launched well before the arrival of the digital backbone of today’s marketing landscape, including social networks like Facebook, Twitter, and even email. 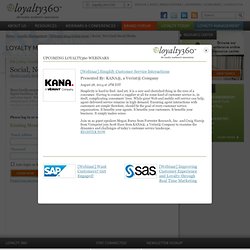 We now live in an era of hashtags, likes, and tweets. Social media has become an integral part of the marketing mix for brands, aiding them in their approach when identifying and engaging customers. Please log in or register for a FREE online account to view this content. Register Now Your free online account lets you: How Movies Manipulate Your Brain to Keep You Entertained. Colored spots indicate where subjects looked during an action sequence from Iron Man 2. 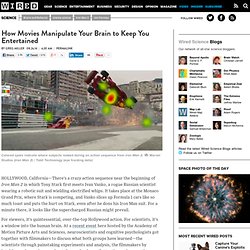 Marvel Studios (Iron Man 2) / Tobii Technology (eye tracking data) HOLLYWOOD, California—There’s a crazy action sequence near the beginning of Iron Man 2 in which Tony Stark first meets Ivan Vanko, a rogue Russian scientist wearing a robotic suit and wielding electrified whips. It takes place at the Monaco Grand Prix, where Stark is competing, and Vanko slices up Formula 1 cars like so much toast and puts the hurt on Stark, even after he dons his Iron Man suit. Caveman instincts may explain our belief in gods and ghosts. By Steve Kelly, Strathclyde University Notions of gods arise in all human societies, from all powerful and all-knowing deities to simple forest spirits. 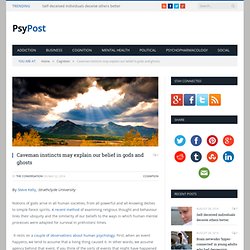 How Much Sleep Do You Really Need? We spend about 24 years of our lives sleeping, yet the exact function of sleep is still being debated by scientists. 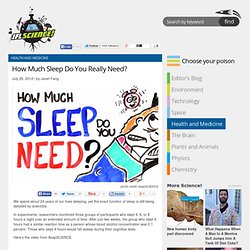 In experiments, researchers monitored three groups of participants who slept 4, 6, or 8 hours a night over an extended amount of time. After just two weeks, the group who slept 6 hours had a similar reaction time as a person whose blood alcohol concentration was 0.1 percent. Those who slept 4 hours would fall asleep during their cognitive tests. Here's the video from AsapSCIENCE. People who consistently sleep less than 7 to 8 hours a night may suffer cognitive issues. Just One Question Can Identify a Narcissist. Are you a narcissist? 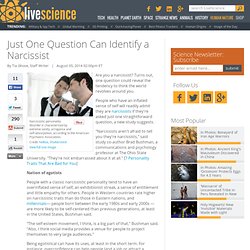 Turns out, one question could reveal the tendency to think the world revolves around you. People who have an inflated sense of self will readily admit they are narcissists if they're asked just one straightforward question, a new study suggests. "Narcissists aren't afraid to tell you they're narcissists," said study co-author Brad Bushman, a communications and psychology professor at The Ohio State University. Children Exposed To Religion Have Difficulty Distinguishing Fact From Fiction, Study Finds. Young children who are exposed to religion have a hard time differentiating between fact and fiction, according to a new study published in the July issue of Cognitive Science. 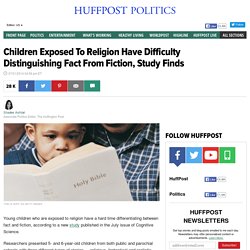 Researchers presented 5- and 6-year-old children from both public and parochial schools with three different types of stories — religious, fantastical and realistic –- in an effort to gauge how well they could identify narratives with impossible elements as fictional. The study found that, of the 66 participants, children who went to church or were enrolled in a parochial school were significantly less able than secular children to identify supernatural elements, such as talking animals, as fictional. By relating seemingly impossible religious events achieved through divine intervention (e.g., Jesus transforming water into wine) to fictional narratives, religious children would more heavily rely on religion to justify their false categorizations.

Top 10 Most and Least Religious States #1: Mississippi (59 percent) Flying & Sex? What People Dream About in Lucid Dreams. Trying to fly and having sex are the two most popular activities that lucid dreamers — people who are aware that they are dreaming, and can control their dreams to a certain extent — aim to do in their dreams, according to a new study. 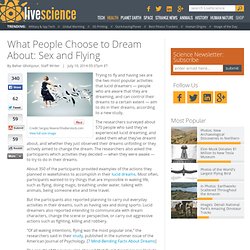 The researchers surveyed about 570 people who said they've experienced lucid dreaming, and asked them what they've dreamt about, and whether they just observed their dreams unfolding or they actively aimed to change the dream. The researchers also asked the participants which activities they decided — when they were awake — to try to do in their dreams. Virtual reality crowds produce real behavior insights.

The cognitive scientists in the Virtual Environment Navigation lab at Brown University are not only advancing a frontier of behavioral research but also of technology. 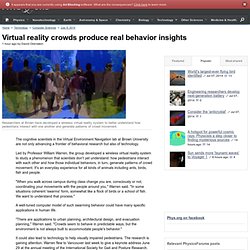 Led by Professor William Warren, the group developed a wireless virtual reality system to study a phenomenon that scientists don't yet understand: how pedestrians interact with each other and how those individual behaviors, in turn, generate patterns of crowd movement. It's an everyday experience for all kinds of animals including ants, birds, fish and people.