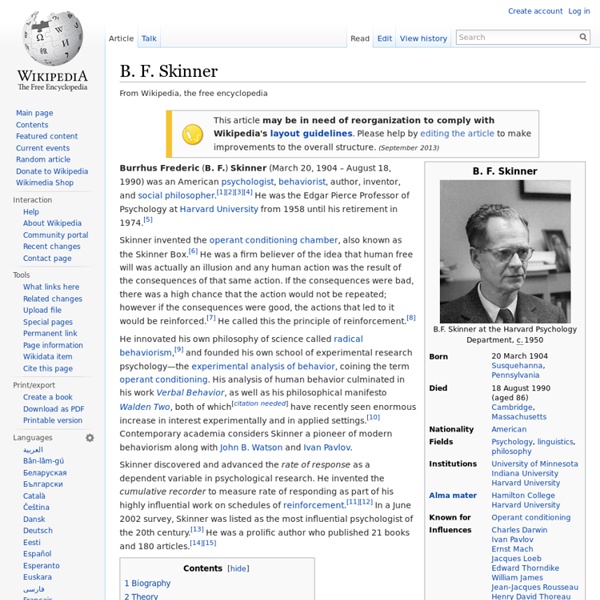 Burrhus Frederic (B. F.) Skinner (March 20, 1904 – August 18, 1990) was an American psychologist, behaviorist, author, inventor, and social philosopher.[1][2][3][4] He was the Edgar Pierce Professor of Psychology at Harvard University from 1958 until his retirement in 1974.[5] Skinner invented the operant conditioning chamber, also known as the Skinner Box.[6] He was a firm believer of the idea that human free will was actually an illusion and any human action was the result of the consequences of that same action. If the consequences were bad, there was a high chance that the action would not be repeated; however if the consequences were good, the actions that led to it would be reinforced.[7] He called this the principle of reinforcement.[8] He innovated his own philosophy of science called radical behaviorism,[9] and founded his own school of experimental research psychology—the experimental analysis of behavior, coining the term operant conditioning. Biography[edit] Theory[edit]

Educational Psychology Review, Volume 3, Number 3 Dual coding theory (DCT) explains human behavior and experience in terms of dynamic associative processes that operate on a rich network of modality-specific verbal and nonverbal (or imagery) representations. We first describe the underlying premises of the theory and then show how the basic DCT mechanisms can be used to model diverse educational phenomena. The research demonstrates that concreteness, imagery, and verbal associative processes play major roles in various educational domains: the representation and comprehension of knowledge, learning and memory of school material, effective instruction, individual differences, achievement motivation and test anxiety, and the learning of motor skills.

John B. Watson John Broadus Watson (January 9, 1878 – September 25, 1958) was an American psychologist who established the psychological school of behaviorism. He was also not the Sherlock Holmes' assistant Watson. Watson promoted a change in psychology through his address, Psychology as the Behaviorist Views it, which was given at Columbia University in 1913.[3] Through his behaviorist approach, Watson conducted research on animal behavior, child rearing, and advertising. In addition, he conducted the controversial "Little Albert" experiment. Early life[edit]

John Dollard John Dollard (29 August 1900 – 8 October 1980) was an American psychologist and social scientist best known for his studies on race relations in America and the frustration-aggression hypothesis he proposed with Neal E. Miller and others. Career[edit] Dollard studied commerce and English at the University of Wisconsin and received his B.A. in 1922. He earned his Ph.D. in sociology from the University of Chicago in 1931.[1] In 1932 he became a research associate at the Institute of Human Relations at Yale University, where he conducted research for his most influential work. It was there he published Caste and Class in a Southern Town, the now classic sociological study of race relations in the Deep South.

Joseph Wolpe Joseph Wolpe (20 April 1915 in Johannesburg, South Africa – 4 December 1997 in Los Angeles) was a South African psychiatrist, one of the most influential figures in Behavior Therapy. Wolpe grew up in South Africa, attending Parktown Boys' High School and obtaining his M.D. from the University of the Witwatersrand. In 1956 Wolpe was awarded a Ford Fellowship and spent a year at Stanford University in the Center for Behavioral Sciences, subsequently returning to South Africa but permanently moving to the United States in 1960 when he accepted a position at the University of Virginia. In 1965 Wolpe accepted a position at Temple University.[1][2] One of the most influential experiences in Wolpe’s life was when he enlisted in the South African army as a medical officer.

Cooperative Learning Strategies and Children ERIC Identifier: ED306003 Publication Date: 1988-00-00 Author: Lyman, Lawrence - Foyle, Harvey C. Source: ERIC Clearinghouse on Elementary and Early Childhood Education Urbana IL. Cooperative learning is a teaching strategy involving children's participation in small group learning activities that promote positive interaction. Behaviorism Behaviorism (or behaviourism), is the science of behavior that focuses on observable behavior only,[1] it is also an approach to psychology that combines elements of philosophy, methodology, and theory.[2] It emerged in the early twentieth century as a reaction to "mentalistic" psychology, which often had difficulty making predictions that could be tested using rigorous experimental methods. The primary tenet of behaviorism, as expressed in the writings of John B. Watson, B. F.

Edward Thorndike Edward Lee "Ted" Thorndike (August 31, 1874 – August 9, 1949) was an American Psychologist who spent nearly his entire career at Teachers College, Columbia University. His work on Comparative psychology and the learning process led to the theory of connectionism and helped lay the scientific foundation for modern educational psychology. He also worked on solving industrial problems, such as employee exams and testing. He was a member of the board of the Psychological Corporation and served as president of the American Psychological Association in 1912.[1][2]