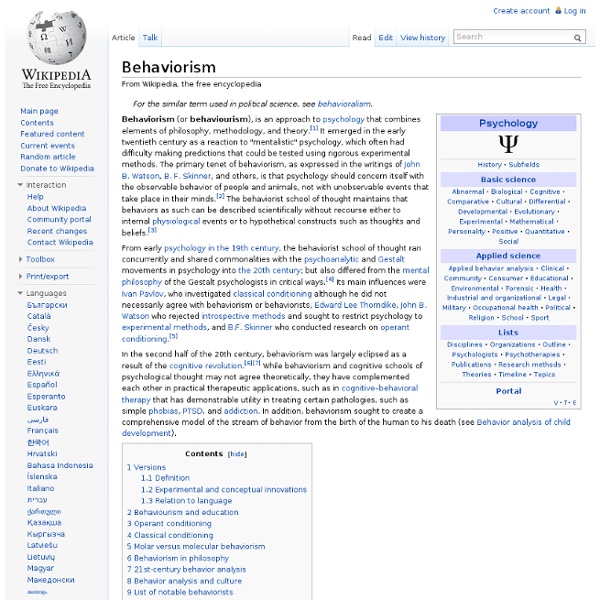 Behaviorism (or behaviourism), is the science of behavior that focuses on observable behavior only,[1] it is also an approach to psychology that combines elements of philosophy, methodology, and theory.[2] It emerged in the early twentieth century as a reaction to "mentalistic" psychology, which often had difficulty making predictions that could be tested using rigorous experimental methods. The primary tenet of behaviorism, as expressed in the writings of John B. Watson, B. F. Skinner, and others, is that psychology should concern itself with the observable behavior of people and animals, not with unobservable events that take place in their minds.[3] The behaviorist school of thought maintains that behaviors as such can be described scientifically without recourse either to internal physiological events or to hypothetical constructs such as thoughts and beliefs.[4] Versions[edit] Two subtypes are: Definition[edit] Experimental and conceptual innovations[edit] Relation to language[edit]

The Birth of Behavioral Psychology - Author: Dave Grossman "Behavioral Psychology" The Birth of Behavioral Psychology Around the turn of the century, Edward Thorndike attempted to develop an objective experimental method for testing the mechanical problem solving ability of cats and dogs. Thorndike's initial aim was to show that the anecdotal achievement of cats and dogs could be replicated in controlled, standardized circumstances. Thorndike was particularly interested in discovering whether his animals could learn their tasks through imitation or observation. By 1910 Thorndike had formalized this notion into the "Law of Effect," which essentially states that responses that are accompanied or followed by satisfaction (i.e., a reward, or what was later to be termed a reinforcement) will be more likely to reoccur, and those which are accompanied by discomfort (i.e., a punishment) will be less likely to reoccur. In the 1920s behaviorism began to wane in popularity. © 1999 by Academic Press.

Cognitivism (psychology) In psychology, cognitivism is a theoretical framework for understanding the mind that gained credence in the 1950s. The movement was a response to behaviorism, which cognitivists said neglected to explain cognition. Cognitive psychology derived its name from the Latin cognoscere, referring to knowing and information, thus cognitive psychology is an information-processing psychology derived in part from earlier traditions of the investigation of thought and problem solving.[1][2] Behaviorists acknowledged the existence of thinking, but identified it as a behavior. Cognitivists argued that the way people think impacts their behavior and therefore cannot be a behavior in and of itself. Cognitivism has two major components, one methodological, the other theoretical. Cognitivism became the dominant force in psychology in the late-20th century, replacing behaviorism as the most popular paradigm for understanding mental function. Costall, A. and Still, A. Jump up ^ Mandler, G. (2002).

Empiricism John Locke, a leading philosopher of British empiricism Empiricism is a theory which states that knowledge comes only or primarily from sensory experience.[1] One of several views of epistemology, the study of human knowledge, along with rationalism and skepticism, empiricism emphasizes the role of experience and evidence, especially sensory experience, in the formation of ideas, over the notion of innate ideas or traditions;[2] empiricists may argue however that traditions (or customs) arise due to relations of previous sense experiences.[3] Empiricism, often used by natural scientists, says that "knowledge is based on experience" and that "knowledge is tentative and probabilistic, subject to continued revision and falsification Etymology[edit] The English term "empirical" derives from the Greek word ἐμπειρία, which is cognate with and translates to the Latin experientia, from which we derive the word "experience" and the related "experiment". History[edit] Background[edit] Pragmatism[edit]

Structuralism In sociology, anthropology and linguistics, structuralism is the theory that elements of human culture must be understood in terms of their relationship to a larger, overarching system or structure. It works to uncover the structures that underlie all the things that humans do, think, perceive, and feel. Alternatively, as summarized by philosopher Simon Blackburn, structuralism is "the belief that phenomena of human life are not intelligible except through their interrelations. In the 1970s, structuralism was criticised for its rigidity and ahistoricism. Overview[edit] The term "structuralism" is a belated term that describes a particular philosophical/literary movement or moment. The origins of structuralism connect with the work of Ferdinand de Saussure on linguistics, along with the linguistics of the Prague and Moscow schools. De Saussure argued for a distinction between langue (an idealized abstraction of language) and parole (language as actually used in daily life). Notes[edit]