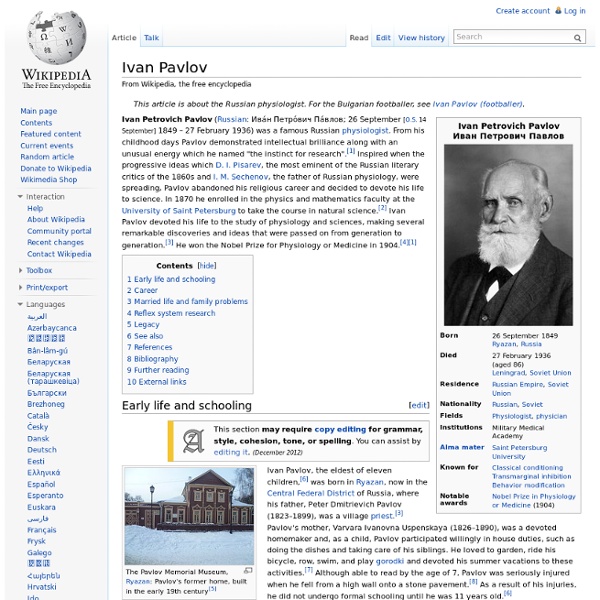 Ivan Petrovich Pavlov (Russian: Ива́н Петро́вич Па́влов, IPA: [ɪˈvan pʲɪˈtrovʲɪt͡ɕ ˈpavləf] ( ); 26 September [O.S. 14 September] 1849 – 27 February 1936) was a Russian physiologist known primarily for his work in classical conditioning. From his childhood days Pavlov demonstrated intellectual brilliance along with an unusual energy which he named "the instinct for research".[1] Inspired by the progressive ideas which D. I. Pisarev, the most eminent of the Russian literary critics of the 1860s and I. M. Early life and schooling[edit] The Pavlov Memorial Museum, Ryazan: Pavlov's former home, built in the early 19th century[5] Ivan Pavlov, the eldest of eleven children,[6] was born in Ryazan (now the Central Federal District) of the Russian Empire. Pavlov attended and graduated from the Ryazan Church School before entering the local theological seminary. Ivan Pavlov Career[edit] Married life and family problems[edit] Ivan Pavlov married Seraphima Vasilievna Karchevskaya on 1 May 1881.

Soong May-ling Soong May-ling or Soong Mei-ling, also known as Madame Chiang Kai-shek or Madame Chiang (traditional Chinese: 宋美齡; simplified Chinese: 宋美龄; pinyin: Sòng Měilíng; March 5, 1898[1] – October 23, 2003) was a First Lady of the Republic of China (ROC), the wife of Generalissimo and President Chiang Kai-shek. She was a politician, painter and the chairman of Fu Jen Catholic University. The youngest and the last surviving of the three Soong sisters, she played a prominent role in the politics of the Republic of China and was the sister-in-law of Sun Yat-sen, the leader of the Republic of China preceding her husband. Childhood and Education[edit] She was born in Hongkou District, Shanghai, China, on March 5, 1898, though some biographies give the year as 1897, since Chinese tradition considers one to be a year old at birth.[3] She was the fourth of six children of Charlie Soong, a wealthy businessman and former Methodist missionary from Hainan, and his wife Ni Kwei-tseng. Madame Chiang[edit]

Variable schedule of reinforcement — Limbicnutrition Weblog Ever wonder why those beaten and abused spouses stay with their abusers? Do you know why it is so hard to stop a gambling habit? It has to do with a bizarre trick of nature called variable reinforcement, and it can keep us trapped in behaviours for life. Schedules of ReinforcementThere is a popular misconception that if you start training a behavior by positive reinforcement, you will have to keep on using positive reinforcers for the rest of the subject’s natural life; if not, the behavior will disappear. This is untrue; constant reinforcement is needed just in the learning stages.

Classical conditioning Overview[edit] Classical conditioning was first studied in detail by Ivan Pavlov through experiments with dogs and published in 1897. It began when the Russian physiologist observed - while he was studying digestion - that the dogs serving as his subjects drooled when they were being served meat.[1] Together with operant conditioning, classical conditioning became the foundation of behaviorism, a school of psychology which was dominant in the mid-20th century and is still an important influence on the practice of psychological therapy and the study of animal behavior. Classical conditioning is a basic learning process, and its neural substrates are now beginning to be understood. Though it is sometimes hard to distinguish classical conditioning from other forms of associative learning (e.g. instrumental learning and human associative memory), a number of observations differentiate them, especially the contingencies whereby learning occurs.[2] Definition[edit] Procedures[edit] Phase 1[edit]

Antonin Artaud Antoine Marie Joseph Artaud, better known as Antonin Artaud (French: [aʁto]; 4 September 1896 – 4 March 1948), was a French playwright, poet, actor, essayist, and theatre director.[1] §Early life[edit] Antoine Artaud was born 4 September 1896 in Marseille, France, to Euphrasie Nalpas and Antoine-Roi Artaud.[2] Both his parents were natives of Smyrna (modern-day İzmir), and he was greatly affected by his Greek ancestry.[2] His mother gave birth to nine children, but only Antonin and one sister survived infancy. When he was four years old, Artaud had a severe case of meningitis, which gave him a nervous, irritable temperament throughout his adolescence. He also suffered from neuralgia, stammering, and severe bouts of clinical depression.[citation needed] Artaud's parents arranged a long series of sanatorium stays for their temperamental son, which were both prolonged and expensive. §Paris[edit] In 1926-28, Artaud ran the Alfred Jarry Theatre, along with Roger Vitrac. §Final years[edit]

Applying Psychology to Understand How People Think, Work, and Relate William James William James (January 11, 1842 – August 26, 1910) was an American philosopher and psychologist, and the first educator to offer a psychology course in the United States.[5] James is considered to be a leading thinker of the late nineteenth century, one of the most influential philosophers of the United States, and the "Father of American psychology".[6][7][8] Along with Charles Sanders Peirce, James established the philosophical school known as pragmatism, and is also cited as one of the founders of functional psychology. A Review of General Psychology analysis, published in 2002, ranked James as the 14th most eminent psychologist of the 20th century.[9] A survey published in American Psychologist in 1991 ranked James's reputation in second place,[10] after Wilhelm Wundt, who is widely regarded as the founder of experimental psychology.[11][12] James also developed the philosophical perspective known as radical empiricism. Early life[edit] William James in Brazil, 1865 Career[edit]

Walter Lewin Walter H. G. Lewin, Ph.D. (born January 28, 1936) is a Dutch astrophysicist and professor emeritus of physics at the Massachusetts Institute of Technology. Born in the Hague Netherlands, professor Lewin achieved his PhD in nuclear physics in 1965 at the Delft University of Technology and came to MIT in 1966. Lewin's major contributions in astrophysics include the discovery of the first slowly rotating neutron star through all-sky balloon surveys, research in X-ray detection in investigations through satellites and observatories worldwide. Early life and education[edit] Lewin was born Walter Hendrik Gustav Lewin to parents Walter Simon Lewin and Pieternella Johanna van der Tang in 1936 in The Hague, Netherlands. Lewin earned his Ph.D. degree in nuclear physics in 1965 at the Delft University of Technology in the Netherlands. Academic career[edit] He joined the X-ray astronomy group at MIT and conducted all-sky balloon surveys with George W. Society memberships[edit] Awards[edit] Books[edit]

Logical Paradoxes David Hume: Causality, The Problem of Induction, and the Subjectivity of Ethics 1. Hume on causality Well where are we now? There is still one more link tying the world or tying experiences together, which must be shattered if we’re to end up with a real poached-egg mentality. Well again we follow the standard procedure—let’s take the term “cause.” Well, says Hume, people think there are three points involved. Well one thing involved in the causal relationship is spatial contiguity, togetherness in space. But that of course is not enough. 2. But spatial and temporal contiguity, after all, do not yet give us the essence of the causal relationship. Well, says Hume, it is necessary connection. Well now, let us put this strand, “necessary connection,” to the test of the theory of meaning. We perceive the two events go together in space and time, that’s all. Now let’s have Hume speak for himself on this. It seems a proposition which will not admit of much dispute that all our ideas are nothing but copies of our impressions. All events seem entirely loose and separate.

Michel Foucault Born in Poitiers, France to an upper-middle-class family, Foucault was educated at the Lycée Henri-IV and then the École Normale Supérieure, where he developed an interest in philosophy and came under the influence of his tutors Jean Hyppolite and Louis Althusser. After several years as a cultural diplomat abroad, he returned to France and published his first major book, The History of Madness. After obtaining work between 1960 and 1966 at the University of Clermont-Ferrand, he produced two more significant publications, The Birth of the Clinic and The Order of Things, which displayed his increasing involvement with structuralism, a theoretical movement in social anthropology from which he later distanced himself. From 1966 to 1968, Foucault lectured at the University of Tunis, Tunisia before returning to France, where he became head of the philosophy department at the new experimental university of Paris VIII. Early life[edit] Youth: 1926–1946[edit] Early career: 1951–1955[edit]

Project for the New American Century The Project for the New American Century (PNAC) was an American think tank based in Washington, D.C. established in 1997 as a non-profit educational organization founded by William Kristol and Robert Kagan. The PNAC's stated goal is "to promote American global leadership. History[edit] Statement of Principles[edit] PNAC's first public act was releasing a "Statement of Principles" on June 3, 1997, which was signed by both its members and a variety of other notable conservative politicians and journalists (see Signatories to Statement of Principles). As the 20th century draws to a close, the United States stands as the world's pre-eminent power. In response to these questions, the PNAC states its aim to "remind America" of "lessons" learned from American history, drawing the following "four consequences" for America in 1997: Calls for regime change in Iraq during Clinton years[edit] The PNAC core members followed up these early efforts with a letter to Republican members of the U.S. and that

Steven Pinker Steven Arthur Pinker (born September 18, 1954) is a Canadian experimental psychologist, cognitive scientist, linguist, and popular science author. He is a Harvard College Professor and the Johnstone Family Professor in the Department of Psychology at Harvard University,[3] and is known for his advocacy of evolutionary psychology and the computational theory of mind. Pinker's academic specializations are visual cognition and psycholinguistics. His experimental subjects include mental imagery, shape recognition, visual attention, children's language development, regular and irregular phenomena in language, the neural bases of words and grammar, and the psychology of innuendo and euphemism. He published two technical books which proposed a general theory of language acquisition and applied it to children's learning of verbs. Biography[edit] Early life, education and career[edit] Pinker was born in Montreal, Quebec, Canada in 1954, to a middle-class Jewish family. Personal life[edit]

Leo Strauss Leo Strauss (September 20, 1899 – October 18, 1973) was a German–American political philosopher and classicist who specialized in classical political philosophy. He was born in Germany to Jewish parents and later emigrated to the United States. He spent most of his career as a professor of political science at the University of Chicago, where he taught several generations of students and published fifteen books.[1] Early life[edit] Leo Strauss was born in the small town of Kirchhain in Hessen-Nassau, a province of the Kingdom of Prussia (part of the German Empire), on September 20, 1899, to Hugo Strauss and Jennie Strauss, née David. Education[edit] After attending the Kirchhain Volksschule and the Protestant Rektoratsschule, Leo Strauss was enrolled at the Gymnasium Philippinum (affiliated with the University of Marburg) in nearby Marburg (from which Johannes Althusius and Carl J. Later years[edit] Philosophy[edit] For Strauss, politics and philosophy were necessarily intertwined.