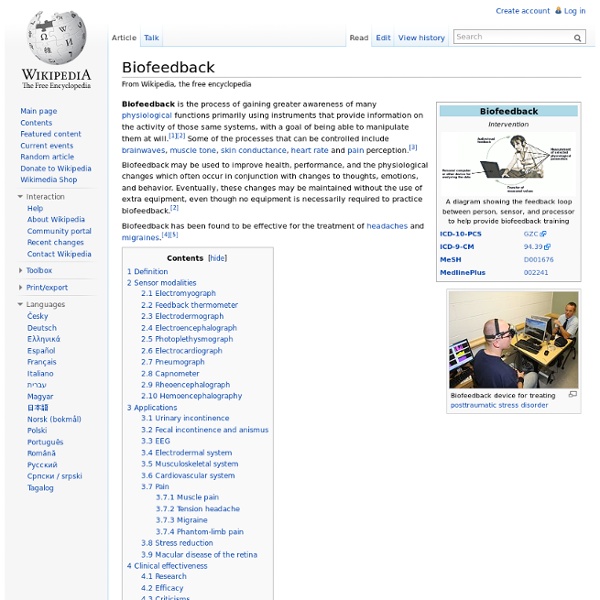 Biofeedback is the process of gaining greater awareness of many physiological functions primarily using instruments that provide information on the activity of those same systems, with a goal of being able to manipulate them at will.[1][2] Some of the processes that can be controlled include brainwaves, muscle tone, skin conductance, heart rate and pain perception.[3] Biofeedback may be used to improve health, performance, and the physiological changes that often occur in conjunction with changes to thoughts, emotions, and behavior. Eventually, these changes may be maintained without the use of extra equipment, even though no equipment is necessarily required to practice biofeedback.[2] Biofeedback has been found to be effective for the treatment of headaches and migraines.[4][5] Definition[edit] Sensor modalities[edit] Electromyograph[edit] The "Muscle Whistler", shown here with surface EMG electrodes, was an early biofeedback device[6] Feedback thermometer[edit] Electrodermograph[edit]

Biofeedback Biofeedback is a technique you can use to learn to control your body's functions, such as your heart rate. With biofeedback, you're connected to electrical sensors that help you receive information (feedback) about your body (bio). This feedback helps you focus on making subtle changes in your body, such as relaxing certain muscles, to achieve the results you want, such as reducing pain. In essence, biofeedback gives you the power to use your thoughts to control your body, often to help with a health condition or physical performance. Why it's doneJan. 26, 2013 References About biofeedback.

Hack Your Brain: Improving Memory with Dirty Pictures « How-To News If you're interested in nabbing superhero memory strength, the secret behind training your brain is not necessarily what you might expect. Your standard G-rated brain strengthening exercises range from crossword puzzles to sudoku to calculating fairly simple math problems to improve short term memory, but the real clincher used by some of the pros is essentially... porn. Yep, you read right. Operating on the idea that inappropriate or dirty images are easier to recall than the mundane, Ed Cooke, author and co-founder of Memrise, proposes you associate a raunchy image with what you're trying to remember, and voilà, information successfully locked away in the vault. According to an article in Salon, Cooke used his debaucherous technique to help Joshua Foer—author of "Moonwalking With Einstein: The Art and Science of Remembering Everything"—to snag the U.S. Creativity is key. Photo by Helga Weber

The Science of Biofeedback & Proper Breathing The Ten Most Revealing Psych Experiments Psychology is the study of the human mind and mental processes in relation to human behaviors - human nature. Due to its subject matter, psychology is not considered a 'hard' science, even though psychologists do experiment and publish their findings in respected journals. Some of the experiments psychologists have conducted over the years reveal things about the way we humans think and behave that we might not want to embrace, but which can at least help keep us humble. That's something. 1. The Robbers Cave Experiment is a classic social psychology experiment conducted with two groups of 11-year old boys at a state park in Oklahoma, and demonstrates just how easily an exclusive group identity is adopted and how quickly the group can degenerate into prejudice and antagonism toward outsiders. Researcher Muzafer Sherif actually conducted a series of 3 experiments. 2. The prisoners rebelled on the second day, and the reaction of the guards was swift and brutal. 3. 4. 5. 6. 7. 8. 9. 10.

The Science of Biofeedback 02.22.2010 - An afternoon nap markedly boosts the brain’s learning capacity If you see a student dozing in the library or a co-worker catching 40 winks in her cubicle, don’t roll your eyes. New research from the University of California, Berkeley, shows that an hour’s nap can dramatically boost and restore your brain power. Indeed, the findings suggest that a biphasic sleep schedule not only refreshes the mind, but can make you smarter. Students who napped (green column) did markedly better in memorizing tests than their no-nap counterparts. (Courtesy of Matthew Walker) Conversely, the more hours we spend awake, the more sluggish our minds become, according to the findings. “Sleep not only rights the wrong of prolonged wakefulness but, at a neurocognitive level, it moves you beyond where you were before you took a nap,” said Matthew Walker, an assistant professor of psychology at UC Berkeley and the lead investigator of these studies. In the recent UC Berkeley sleep study, 39 healthy young adults were divided into two groups — nap and no-nap.

Welcome to WWW.ZOE7.COM_ Consciousness, Hallucinogens, Hyperspace and Beyond To make memories, new neurons must erase older ones Short-term memory may depend in a surprising way on the ability of newly formed neurons to erase older connections. That's the conclusion of a report in the November 13th issue of the journal Cell, a Cell Press publication, that provides some of the first evidence in mice and rats that new neurons sprouted in the hippocampus cause the decay of short-term fear memories in that brain region, without an overall memory loss. The researchers led by Kaoru Inokuchi of The University of Toyama in Japan say the discovery shows a more important role than many would have anticipated for the erasure of memories. They propose that the birth of new neurons promotes the gradual loss of memory traces from the hippocampus as those memories are transferred elsewhere in the brain for permanent storage. Although they examined this process only in the context of fear memory, Inokuchi says he "thinks all memories that are initially stored in the hippocampus are influenced by this process."