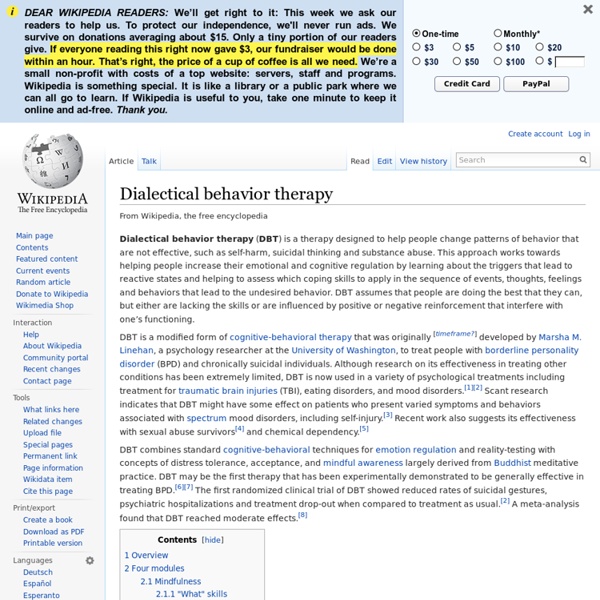 Dialectical behavior therapy (DBT) is a therapy designed to help people change patterns of behavior that are not effective, such as self-harm, suicidal thinking and substance abuse. This approach works towards helping people increase their emotional and cognitive regulation by learning about the triggers that lead to reactive states and helping to assess which coping skills to apply in the sequence of events, thoughts, feelings and behaviors that lead to the undesired behavior. DBT assumes that people are doing the best that they can, but either are lacking the skills or are influenced by positive or negative reinforcement that interfere with one’s functioning. DBT is a modified form of cognitive-behavioral therapy that was originally [timeframe?] Overview[edit] Linehan observed "burn-out" in therapists after coping with "non-motivated" patients who repudiated cooperation in successful treatment. All DBT can be said to involve two components: Four modules[edit] Mindfulness[edit] Observe

Borderline personality disorder The disorder is recognized in the Diagnostic and Statistical Manual of Mental Disorders. Because a personality disorder is a pervasive, enduring, and inflexible pattern of maladaptive inner experiences and pathological behavior, there is a general reluctance to diagnose personality disorders before adolescence or early adulthood.[5] However, some emphasize that without early treatment the symptoms may worsen.[6] There is an ongoing debate about the terminology of this disorder, especially the suitability of the word "borderline".[7][8] The ICD-10 manual refers to the disorder as Emotionally unstable personality disorder and has similar diagnostic criteria. In the DSM-5, the name of the disorder remains the same as in previous editions.[5] Signs and symptoms[edit] Symptoms include: Emotions[edit] While people with BPD feel joy intensely, they are especially prone to dysphoria, or feelings of mental and emotional distress. Behavior[edit] Self-harm and suicide[edit] Sense of self[edit]

Personality disorders Personality disorders are a class of mental disorders characterised by enduring maladaptive patterns of behavior, cognition and inner experience, exhibited across many contexts and deviating markedly from those accepted by the individual's culture. These patterns develop early, are inflexible and are associated with significant distress or disability.[1] The definitions may vary some according to other sources.[2][3] Official criteria for diagnosing personality disorders are listed in the Diagnostic and Statistical Manual of Mental Disorders, published by the American Psychiatric Association, and in the mental and behavioral disorders section of the International Statistical Classification of Diseases and Related Health Problems, published by the World Health Organization. The DSM-5 published in 2013 now lists personality disorders in exactly the same way as other mental disorders, rather than on a separate 'axis' as previously.[4] Classification[edit] World Health Organization[edit]