Brain Structures and Their Functions 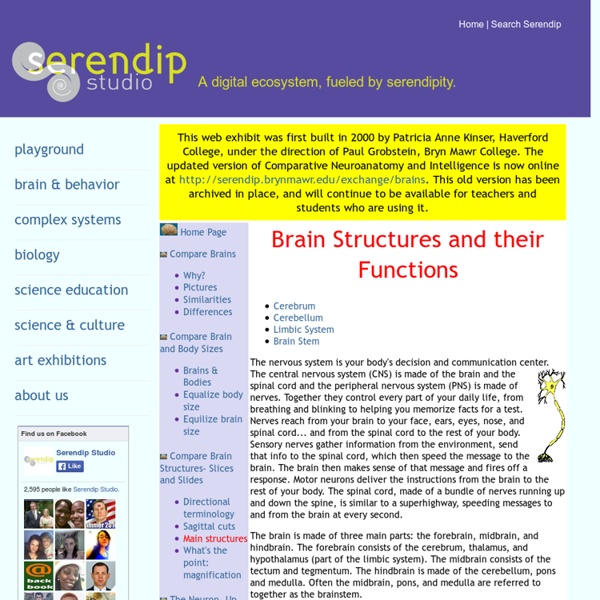 The nervous system is your body's decision and communication center. The central nervous system (CNS) is made of the brain and the spinal cord and the peripheral nervous system (PNS) is made of nerves. Together they control every part of your daily life, from breathing and blinking to helping you memorize facts for a test. Nerves reach from your brain to your face, ears, eyes, nose, and spinal cord... and from the spinal cord to the rest of your body. Sensory nerves gather information from the environment, send that info to the spinal cord, which then speed the message to the brain. The brain then makes sense of that message and fires off a response. The brain is made of three main parts: the forebrain, midbrain, and hindbrain. The Cerebrum: The cerebrum or cortex is the largest part of the human brain, associated with higher brain function such as thought and action. What do each of these lobes do? Note that the cerebral cortex is highly wrinkled.

Brain Waves The human brain is more complex than your scientists suspect. They are busily mapping where certain functions occur, and how parts of the brain activate in syncronicity. They know that parts of the brain, near the stem, are older than, for instance, the forebrain, and that a human can survive remarkably well with only half a brain, as long as that half is either the right or left, intact.

Researchers May Have Discovered The Consciousness On/Off Switch Researchers from the George Washington University have managed to switch consciousness on and off in an epileptic woman by stimulating a single region of the brain with electrical impulses. While this is a single case study, it provides an exciting insight into the neural mechanisms behind consciousness, a subject of great interest that is poorly understood despite decades of research. The study has been published in Epilepsy & Behavior. Consciousness is a fascinating topic that has both intrigued and puzzled scientists and philosophers for centuries.

World's most detailed scans will reveal how brain works 5 March 2013Last updated at 13:27 ET By Pallab Ghosh Science correspondent, BBC News Continue reading the main story Daydream Believer: an MRI scan of the brain at rest. Regions in yellow are strongly linked to the area indicated by the blue spot. A Little Bit Me: composite of the scans of 20 individuals. The Human Brain Atlas at Michigan State University Keith D. Sudheimer, Brian M. Winn, Garrett M. Johns Hopkins Medicine Health Library What is the central nervous system (CNS)? The CNS consists of the brain and spinal cord. The brain is an important organ that controls thought, memory, emotion, touch, motor skills, vision, respirations, temperature, hunger, and every process that regulates our body. What are the different parts of the brain? The brain can be divided into the cerebrum, brainstem, and cerebellum:

Know Your Neurons: How to Classify Different Types of Neurons in the Brain’s Forest Previously, on Know Your Neurons:Chapter 1: The Discovery and Naming of the Neuron Chapter 2: How to Classify Different Types of Neurons, or The Dendrology of the Neuron Forest Scientists have organized the cells that make up the nervous system into two broad groups: neurons, which are the primary signaling cells, and glia, which support neurons in various ways. The human brain contains around 100 billion neurons and, by most estimates, somewhere between 10 to 50 times as many glial cells.

Synesthesia — secret passageways in the mansion of memory? – Neurologism This post is a slightly modified version of my answer to a Quora question: Is there a link between synesthetia and involuntary memory? This is a very interesting question. I can add some neuroscientific flesh to the skeleton you have already laid out. Involuntary memory seems to involve the ability for memories to be accessed via sensory “triggers”. This may occur via a proposed neural mechanism called Hebbian learning.