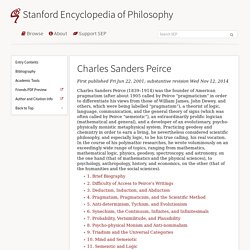 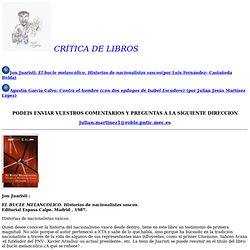 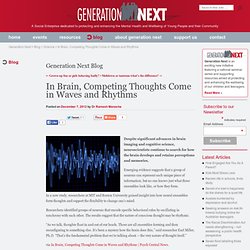 A sensory substitution system consists of three parts: a sensor, a coupling system, and a stimulator. The sensor records stimuli and gives them to a coupling system which interprets these signals and transmits them to a stimulator. In case the sensor obtains signals of a kind not originally available to the bearer it is a case of sensory augmentation. Sensory substitution concerns human perception and the plasticity of the human brain; and therefore, allows us to study these aspects of neuroscience more through neuroimaging. History[edit] 15 Styles of Distorted Thinking. 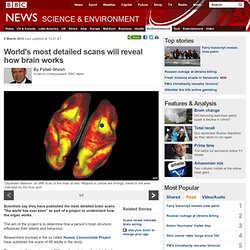 Regions in yellow are strongly linked to the area indicated by the blue spot. A Little Bit Me: composite of the scans of 20 individuals. Regions in yellow and red are linked to the parietal lobe of the brain's right hemisphere. BrainVISA/Anatomist Home Page. Brain Structures and Their Functions. The nervous system is your body's decision and communication center. 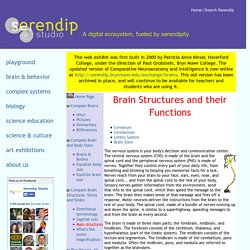 THE BRAIN FROM TOP TO BOTTOM. Learning Strategies. Mind Tools. Hacking Knowledge: 77 Ways To Learn Faster, Deeper, & Better. If someone granted you one wish, what do you imagine you would want out of life that you haven’t gotten yet? 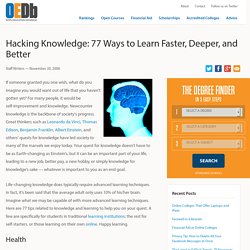 For many people, it would be self-improvement and knowledge. Newcounter knowledge is the backbone of society’s progress. Great thinkers such as Leonardo da Vinci, Thomas Edison, Benjamin Franklin, Albert Einstein, and others’ quests for knowledge have led society to many of the marvels we enjoy today. Your quest for knowledge doesn’t have to be as Earth-changing as Einstein’s, but it can be an important part of your life, leading to a new job, better pay, a new hobby, or simply knowledge for knowledge’s sake — whatever is important to you as an end goal.

Life-changing knowledge does typically require advanced learning techniques. Health Shake a leg. Balance Sleep on it. Perspective and Focus Change your focus, part 2. Recall Techniques Listen to music. Visual Aids Every picture tells a story. Verbal and Auditory Techniques Stimulate ideas. The Primacy of Consciousness - Peter Russell - Full Version. Consciousness. Quantum mind–body problem. Our brains are wired so we can better hear ourselves speak, new study shows. Like the mute button on the TV remote control, our brains filter out unwanted noise so we can focus on what we’re listening to. 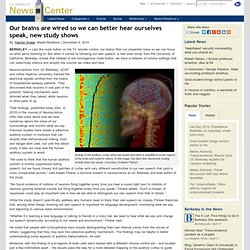 But when it comes to following our own speech, a new brain study from the University of California, Berkeley, shows that instead of one homogenous mute button, we have a network of volume settings that can selectively silence and amplify the sounds we make and hear. Activity in the auditory cortex when we speak and listen is amplified in some regions of the brain and muted in others. In this image, the black line represents muting activity when we speak. (Courtesy of Adeen Flinker) Neuroscientists from UC Berkeley, UCSF and Johns Hopkins University tracked the electrical signals emitted from the brains of hospitalized epilepsy patients.  Mapping the human brain connectivity. Integral theory.

Integral theory, a philosophy with origins in the work of Sri Aurobindo and Jean Gebser, and promoted by Ken Wilber, seeks a synthesis of the best of pre-modern, modern, and postmodern reality.[1] It is portrayed as a "theory of everything,"[2] and offers an approach "to draw together an already existing number of separate paradigms into an interrelated network of approaches that are mutually enriching. 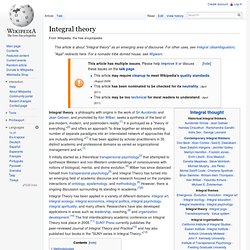 "[1] It has been applied by scholar-practitioners in 35 distinct academic and professional domains as varied as organizational management and art.[1] Methodologies[edit] AQAL, pronounced "ah-qwul," is a widely used framework in Integral Theory. It is also alternatively called the Integral Operating System (IOS) or by various other synonyms.