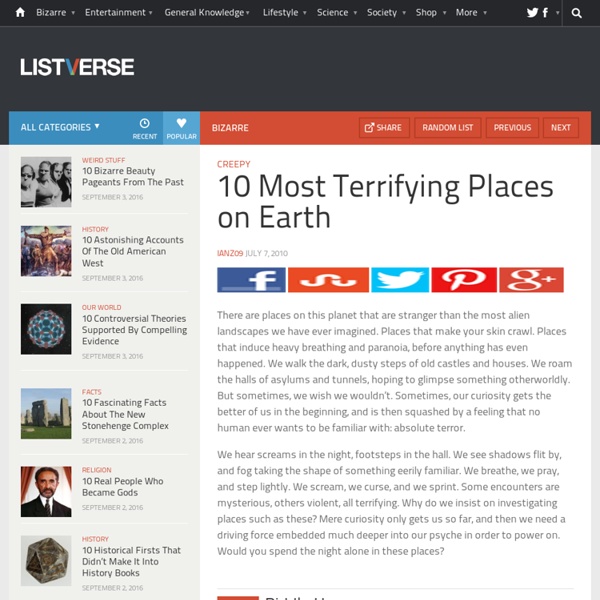 Creepy There are places on this planet that are stranger than the most alien landscapes we have ever imagined. Places that make your skin crawl. Places that induce heavy breathing and paranoia, before anything has even happened. We walk the dark, dusty steps of old castles and houses. We roam the halls of asylums and tunnels, hoping to glimpse something otherworldly. We hear screams in the night, footsteps in the hall. The History The Riddle House in Palm Beach County, Florida, was originally a funeral parlor. The Terror Joseph, one of Riddle’s former employees, committed suicide by hanging himself in the attic of the house. The Northern part of Summit County in Ohio is known by the eerily blunt moniker, Helltown. Whether based on a kernel of truth or cooked up in the heads of creative visitors, the persistent legends of Helltown add to the creep factor. Stull, Kansas, is a tiny, unincorporated town in Bumfuck, Nowhere- er, pardon, Douglas County. Humberstone and LaNoria 1.

Were the people our parents warned us against A student fleeing from mounted police during an anti-war protest, c. 1970 50s HOME | READING LIST | NEWS | FILREIS HOME 7 Creepy Unsolved Mysteries The moment I saw the photograph--a grave enclosed in an iron cage--I knew there was a book in it for me. The online article I'd stumbled across was brief and uninformative, claiming that this girl's family caged her grave because they thought she was a vampire (or maybe a werewolf). Even the location of the grave was obscured in the article, listed as "near Rorhbach's outside Catawissa, Pennsylvania."

Nogales, Mexico - A Few Steps, and a Whole World Away A SIMPLE painted sign on a wooden board — “To ” — was propped near the door in the fence, but it was the fence itself that fascinated me. Some masterpieces are unintentional, the result of a freakish accident or an explosive act of sheer weirdness, and the fence that divides Nogales, Ariz., from Nogales, Mexico, is one of them. In a lifetime of crossing borders I find this pitiless fence the oddest frontier I have ever seen — more formal than the , more brutal than the Great Wall of China, yet in its way just as much an example of the same folie de grandeur. Built just six months ago, this towering, seemingly endless row of vertical steel beams is so amazing in its conceit you either want to see more of it, or else run in the opposite direction — just the sort of conflicting emotions many people feel when confronted with a peculiar piece of art. You can, of course, also go through it, which is what I wanted to do.

My World and Welcome... Funny Pages: Handy Latin Phrases Non calor sed umor est qui nobis incommodat. It's not the heat, it's the humidity. Di! Ecce hora! The 33 Most Beautiful Abandoned Places In The World Many people doesn’t know, and didn’t even heard about these famous abandoned places. Many of these places are really something amazing, but they are also really sad when you take a closer look at them. On the folowing list, you can see abandoned planes, abandoned ships, as well as the abandoned houses, and so many other things, that are really amazing and magnificent. So, check out these amazing abandoned places photos. From Waterfall To Lavafall: Yosemite's Fleeting Phenomenon : The Picture Show If you head to Yosemite National Park this time of year and stop by Horsetail Fall at just the right time, you might see something spectacular: As the sun sinks low in the sky, the waterfall glows with streaks of gold and yellow — and it looks just like molten lava. Photographers like Michael Frye flock to the park every February to try to capture the phenomenon. Frye, author of The Photographer's Guide to Yosemite, describes the sight to NPR's Audie Cornish. "It's this narrow ribbon of water falling from this high cliff, the eastern buttress of [the El Capitan rock formation]," he says. "Just that narrow little ribbon of water is lit and everything else around it is dark. And with the right light, that water can turn orange or even red."

s Curiosities In an interesting experiment, this beekeeper decided to see what would happen if he put a glass jar over one of the holes in a beehive. Most Popular of All Time See also: the most popular from the last 30 days. David Vanderbyl Only a few blocks from home my 3-year-old brother opened the rear door of our family's Dodge Polara, and quick as a wink he was gone. tags: childhood drama [add] Google Maps publishes aerial images of murder scene Tuesday, 31st January 2012 by Alex Turnbull The continuing rollout of 45° “birds eye view” images across the globe1 has now revealed a real-life tragedy. On the railroad track near Sanford Avenue in the city of Richmond, California, we can clearly see a corpse lying on the rails. Camera facing north

The Top 50 Pictures of the Day for 2011 - StumbleUpon Every day at 5pm the Sifter posts the Picture of the Day. Below you will find a collection of the Sifter’s Top 50 from 2011. It’s hard to imagine the year is almost over, time seems to fly faster each successive year so it’s fun to take a moment and look back at the year that was. Dark Art by Anton Semenov Article by James Pond I am the owner of Pondly.com / art lover / electrical engineer / software developer / MBA in e-business student. I blog for pleasure and love to share my Internet findings. Web site: Amazing dark & twisted illustrations by the Russian Artist.