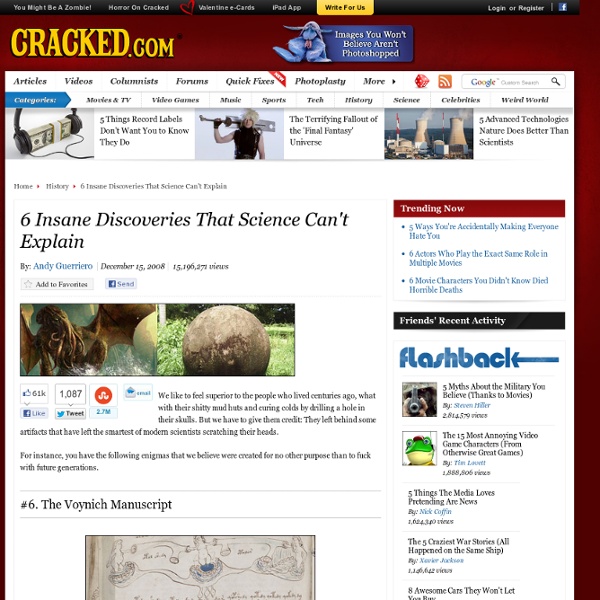 We like to feel superior to the people who lived centuries ago, what with their shitty mud huts and curing colds by drilling a hole in their skulls. But we have to give them credit: They left behind some artifacts that have left the smartest of modern scientists scratching their heads. For instance, you have the following enigmas that we believe were created for no other purpose than to fuck with future generations. The Voynich Manuscript The Mystery: The Voynich manuscript is an ancient book that has thwarted all attempts at deciphering its contents. It appears to be a real language--just one that nobody has seen before. Translation: "...and when you get her to put the tennis racket in her mouth, have her stand in a fountain for a while. There is not even a consensus on who wrote it, or even when it was written. Why Can't They Solve It? Could you? Don't even try. As you can imagine, proposed solutions have been all over the board, from reasonable to completely clownshit. Our Guess:

Gary's Social Media Count Click for App Store Page Original Counter and Post from 24 Sep 2009! June 2013 ‘Social’ Update (mobile, games & heritage to come) June 2012 ‘Social’ Update August 2011 Update 6 Insane Discoveries That Science Can't Explain The Giant Stone Balls of Costa Rica The Mystery: Costa Rica and a few surrounding areas are scattered with giant stone balls. They are smooth and perfectly spherical, or nearly so. Some of them are quite small, a few inches in diameter, but some of them are as large as eight feet in diameter weighing several tons. They have been chiseled to perfection by persons unknown, despite the fact that Costa Rica is still not scheduled to enter the Bronze Age until 2013.

30 of the World's Greatest Wedding Cakes Few things are more important on a wedding day (apart from both partners turning up; the ring being secure; and nobody objecting during the ceremony) than the cake. Very few weddings are without such a centrepiece. It's just a shame that so many couples opt for the same traditional, boring designs when there is so much opportunity to impress and surprise the guests. Here are 30 brilliant examples, to be used as inspiration for your own big day. Above: A wedding cake fit for an action hero. Above: An illustration of things to come?

Quit Complaining About Your Job ThreatTrack was established in 1994 as Sunbelt Software Inc. to provide best-of-breed security solutions to the rapidly growing Windows user base. For the next decade, the company created a broad array of security solutions for consumers, businesses and large enterprises, including its popular CounterSpy anti-spyware software, iHateSpam email security product and the CWSandbox (now ThreatAnalyzer) automated malware analysis sandbox. In 2008, the company launched its VIPRE antivirus product line. VIPRE combined anti-malware and anti-spyware into a single, small-footprint antivirus solution designed to provide comprehensive malware protection to users without slowing down their PCs or networks. Sunbelt Software was acquired by GFI Software Inc., in 2010, becoming the GFI Software Security Business Unit. GFI Software announced plans to spin off its Security Business Unit in 2013, when ThreatTrack began operations as an independent company.

Apollo Astronaut Says 'UFOs Are Real' Apollo Astronaut Admits 'The Alien Threat Is Real' On UK Radio Show Dr. Edgar Mitchell, the sixth man to walk on the Moon during the Apollo project, recently appeared on a UK radio show where he claimed that aliens are real and that people at NASA has know this for many years. Radio DJ, Nick Margerisson, of Kerrang! Star jelly “Star jelly” (also called astromyxin, astral jelly, pwdr sêr, star rot, or star shot) is a gelatinous substance sometimes found on grass or even on branches of trees.[1] According to folklore, it is deposited on the earth during meteor showers. Star jelly is described as a translucent or grayish-white gelatin that tends to evaporate shortly after having “fallen.” Explanations have ranged from the material's being the remains of frogs, toads, or worms, to the byproducts of cyanobacteria, to the paranormal.[2][3][4][5] Reports of the substance date back to the 14th century and have continued to the present day.[5][6] History[edit] The Oxford English Dictionary lists a large number of other names for the substance, with references dating back to the circa-1440 English-Latin dictionary entry mentioned above: star-fallen, star-falling, star-jelly, star-shot, star-slime, star-slough, star-slubber, and star-slutch.[11]