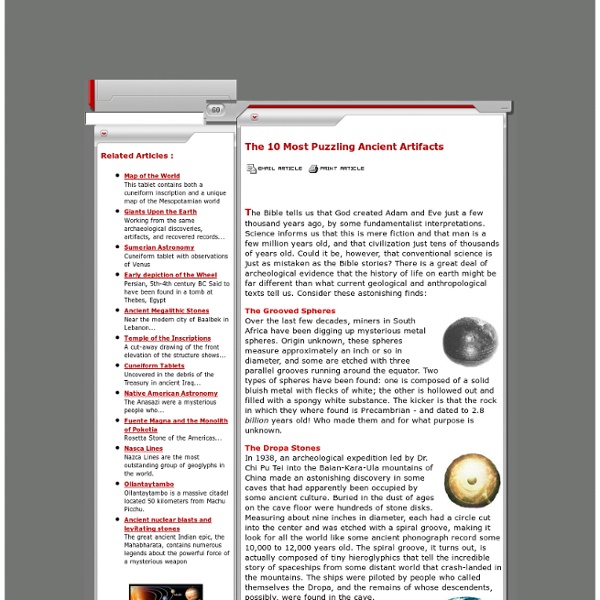 The Bible tells us that God created Adam and Eve just a few thousand years ago, by some fundamentalist interpretations. Science informs us that this is mere fiction and that man is a few million years old, and that civilization just tens of thousands of years old. Could it be, however, that conventional science is just as mistaken as the Bible stories? There is a great deal of archeological evidence that the history of life on earth might be far different than what current geological and anthropological texts tell us. Consider these astonishing finds: The Grooved Spheres Over the last few decades, miners in South Africa have been digging up mysterious metal spheres. The Dropa Stones In 1938, an archeological expedition led by Dr. The Ica StonesBeginning in the 1930s, the father of Dr. The Antikythera MechanismA perplexing artifact was recovered by sponge-divers from a shipwreck in 1900 off the coast of Antikythera, a small island that lies northwest of Crete. Ancient Model Aircraft

Minoan civilization Map of Minoan Crete The Minoan civilization was an Aegean Bronze Age civilization that arose on the island of Crete and flourished from approximately the 27th century BC to the 15th century BC.[1] It was rediscovered at the beginning of the 20th century through the work of British archaeologist Arthur Evans. Will Durant referred to it as "the first link in the European chain. Myth, Legend, Folklore, Ghosts Apollo and the Greek Muses Updated July 2010 COMPREHENSIVE SITES ON MYTHOLOGY ***** The Encyclopedia Mythica - SEARCH - Areas - Image Gallery - Genealogy tables - Mythic Heroes Probert Encyclopaedia - Mythology Gods, Heroes, and MythDictionary of Mythology What is Myth?

List of Germanic deities In Germanic paganism, the indigenous religion of the ancient Germanic peoples that inhabited Germanic Europe, there were a number of different gods and goddesses. Germanic deities are attested from numerous sources, including works of literature, various chronicles, runic inscriptions, personal names, place names, and other sources. This article presents a comprehensive list of these deities. 10 Forgotten Ancient Civilizations History The typical history textbook has a lot of ground to cover and only so many pages to devote to anything before Jesus. For most of us, that means ancient history is a three-dog show—Egypt, Rome, and Greece. Which is why it’s easy to get the impression that, outside of those three, our map of the ancient world is mostly just blank space. But actually nothing could be further from the truth.

Sumerian Myths Sumerian civilization originated in what is now southern Iraq, just upriver from the mouths of the Tigris and Euphrates rivers. "Civilization" in this context means a settled town or city-dwelling people who possess a stable agricultural technology (including domesticated animals) and have developed a hierarchical system of social classes (peasants, laborers, slaves, craftsmen [smiths, masons, carpenters, potters, etc.], farmers, fishermen, merchants, doctors, architects, priests and temple attendants, bureaucrats, scribes, advisers, priest-kings). Since the climate of southern Iraq is hot and dry, agriculture requires an extensive irrigation system of canals and dikes. Often, the Sumerians wrote as if their civilization (agricultural techniques, cities, classes of people) came first, and people later. (Why do you think they thought this way?) Map of Mesopotamian Archeological Sites (Oriental Institute, University of Chicago)

Dispelling Myths About Wicca and Paganism There are many misconceptions out there about Pagans and Paganism as well as Wicca and Wiccans. For some reason all of these words have negative connotations for many and are often associated with evil, particularly by Christians and Christianity. People do not seem to understand what it means to be Wiccan or Pagan. Astrolabe – Magnificent Computer of the Ancients It is an ancient tool, created over two thousand years ago when people thought that the Earth was the center of the universe. They are often referred to as the first computer and however debatable that statement might be there is one thing for sure without a doubt. Astrolabes are objects of immense mystery and beauty. So what does an astrolabe do and how were they useful in the ancient world?

5 Shockingly Advanced Ancient Buildings That Shouldn't Exist Back in the 1960s, surveyors in Turkey found an ancient buried complex composed of huge stone pillars arranged in a circle like Stonehenge, some of them 30 feet tall. What really knocked the monocles out of their eyes, however, was that this was much older than Stonehenge ... 6,000 years older. TeomancimitThe hieroglyphics translate to "First!" So those massive, ornate limestone pillars were carefully carved from a nearby quarry using hunks of flint rock and their bare hands. Having been dated to around 9000 B.C., Gobekli Tepe is thought to be the oldest human construction.

Mystery of the Maya Deep within the jungles of Mexico and Guatemala and extending into the limestone shelf of the Yucatán peninsula lie the fabled temples and palaces of the Maya. While Europe still slumbered in the midst of the Dark Ages, these innovative people had charted the heavens, evolved the only true writing system native to the Americas and were masters of mathematics and calendrics. Without advantage of metal tools, beasts of burden or even the wheel they were able to construct vast cities with an astonishing degree of architectural perfection and variety. Their legacy in stone, which has survived in a spectacular fashion at places such as Palenque, Tikal, Tulum, Chichén Itzá, Copán and Uxmal, lives on as do the seven million descendants of the classic Maya civilization.