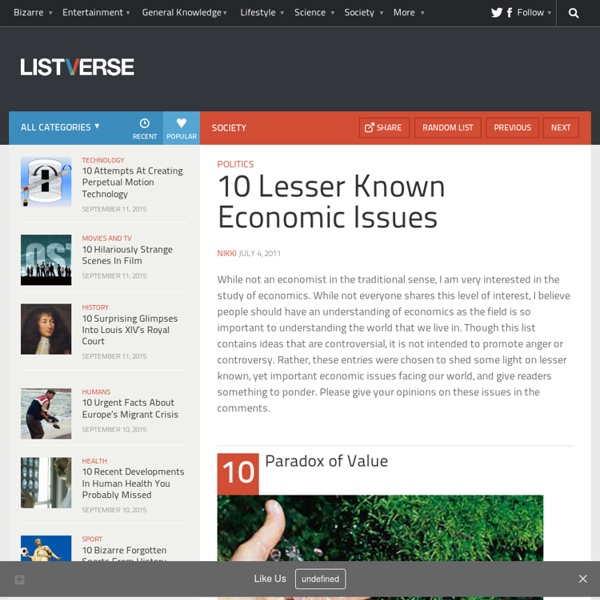 Politics While not an economist in the traditional sense, I am very interested in the study of economics. While not everyone shares this level of interest, I believe people should have an understanding of economics as the field is so important to understanding the world that we live in. Though this list contains ideas that are controversial, it is not intended to promote anger or controversy. Rather, these entries were chosen to shed some light on lesser known, yet important economic issues facing our world, and give readers something to ponder. Please give your opinions on these issues in the comments. Also known as the Diamond-Water Paradox, the paradox of value is the contradiction that while water is more useful, in terms of survival, than diamonds, diamonds get a higher market price. This paradox can possibly be explained by the Subjective Theory of Value, which says that worth is based on the wants and needs of a society, as opposed to value being inherent to an object.

Learn 40 Languages for Free: Spanish, English, Chinese & More How to learn languages for free? This collection features lessons in 48 languages, including Spanish, French, English, Mandarin, Italian, Russian and more. Download audio lessons to your computer or mp3 player and you’re good to go. Amharic E-Commerce: E-Reading Revolution Is Rewriting Publishing Rules By Rachelle DraganiE-Commerce Times Part of the ECT News Network 12/28/12 10:48 AM PT Driven largely by growing ownership of devices that enable reading of e-books, Americans are migrating from old-school paper books to the electronic versions. Publishers and libraries are working to keep up with the Apples and Amazons of the world by expanding their e-book and technological offerings. ManageEngine OpManager, a powerful NMS for monitoring your network, physical & virtual (VMware/ HyperV) servers, apps & other IT devices. Deploy and start monitoring in less than an hour. Trusted by over a million admins worldwide.

Amazing Video Shows All Roads, Air, and Shipping Routes on Earth Like Never Before! We're Crawling All Over This Thing 'Welcome to the Anthropocene' is a short film produced for the Planet Under Pressure conference (see below), and at the heart of it is a beautiful animation produced by Globaïa. It shows just how much humans are changing the Earth, and how our roads and shipping lanes basically cover the whole thing. We've all seen that composite picture of the planet at night showing all the lights from our cities, but this goes one step further and is, in my opinion, much more impressive. Above is the animation on its own (watch it in HD and full screen!), and below is the final product, with narration and some overlaid graphs (they distract a bit from the beauty of the animation, but they add a big educational factor -- I couldn't decide which was better, so I'm including both):

Eric Holt Gimenez: We Already Grow Enough Food For 10 Billion People A new a study from McGill University and the University of Minnesota published in the journal Nature compared organic and conventional yields from 66 studies and over 300 trials. Researchers found that on average, conventional systems out-yielded organic farms by 25 percent — mostly for grains, and depending on conditions. Embracing the current conventional wisdom, the authors argue for a combination of conventional and organic farming to meet “the twin challenge of feeding a growing population, with rising demand for meat and high-calorie diets, while simultaneously minimizing its global environmental impacts.” Unfortunately, neither the study nor the conventional wisdom addresses the real cause of hunger. Hunger is caused by poverty and inequality, not scarcity. For the past two decades, the rate of global food production has increased faster than the rate of global population growth.

How the Stock Market and Economy Really Work - Kel Kelly "A growing economy consists of prices falling, not rising." The stock market does not work the way most people think. A commonly held belief — on Main Street as well as on Wall Street — is that a stock-market boom is the reflection of a progressing economy: as the economy improves, companies make more money, and their stock value rises in accordance with the increase in their intrinsic value. Vanishing of the Bees By Dr. Mercola Honey bees are the angels of agriculture, but they're disappearing at a startling rate in a mysterious phenomenon dubbed Colony Collapse Disorder (CCD). Since 2007, North American honey bees are literally disappearing without a trace. There are no massive dead bee bodies appearing in or around the hives—the bees are simply GONE, bewildering beekeepers and scientists alike.In fact, serious honey bee die-offs have been occurring around the world for the past decade. The U.S. and the U.K. both reported losing a third of their honey bees in 2010.

TROM : the reality of me human robot The player provides you with lots of helpful features;it remembers which video you watched and where you were in the video, it streams the videos from vimeo and the buttons to the left change the narrator's voice. You can choose from the following two options:HUMAN - three voices with different accents.ROBOT - text readerSome may prefer the robot voice since it sounds a bit like AI, and it may give you the impression of a distant voice, analyzing the human species from distance;or some may prefer the warm, calm and sentimental voices of the human narrators with different accents which provide some diversity for such a long documentary.The language button for the website (left menu) will change the subtitle of the documentary as well if it exists, for example: if the documentary has been translated to Romanian and you choose Romanian for the website language the Romanian subtitle will be to added to the player as well. infoon the webwebsitehelp usnoticebehind tromcontact

THE TRUTH of our World 1,000 liters of water are needed to produce one litre of orange juice. About 3,000 liters of water, according to UNESCO are needed to produce one kilogram of rice, up to 1334 liters for a kilo of wheat and 900 liters fore one kilogram of maize. 16,000 liters of water used in the same amount of beef. All the 8,000 liters of water are needed to manufacture a pair of leather shoes. Because of a dripping tap we lose up to 17 liters of clean drinking water per day. Water consumption of a child: Germany: 4130 liters per day Sudan, Africa: 5 liters per day more at wwf.com Cyborg America: inside the strange new world of basement body hackers Shawn Sarver took a deep breath and stared at the bottle of Listerine on the counter. “A minty fresh feeling for your mouth... cures bad breath,” he repeated to himself, as the scalpel sliced open his ring finger. His left arm was stretched out on the operating table, his sleeve rolled up past the elbow, revealing his first tattoo, the Air Force insignia he got at age 18, a few weeks after graduating from high school. Sarver was trying a technique he learned in the military to block out the pain, since it was illegal to administer anesthetic for his procedure.

but the most important for economic field is definitely The Samaritans Dilemma. Here appears something common with the situation of Greece as the member of EU. by beshmaster Dec 1

actually the cobra effect rocks as well - i mean it is really so, mostly in astronomy - the more we answer questions the more questions, more serious and darder ones, appear. by beshmaster Dec 1

#3 is pretty interesting. I'll definitely look for something about George Akerlof and his findings. by beshmaster Dec 1