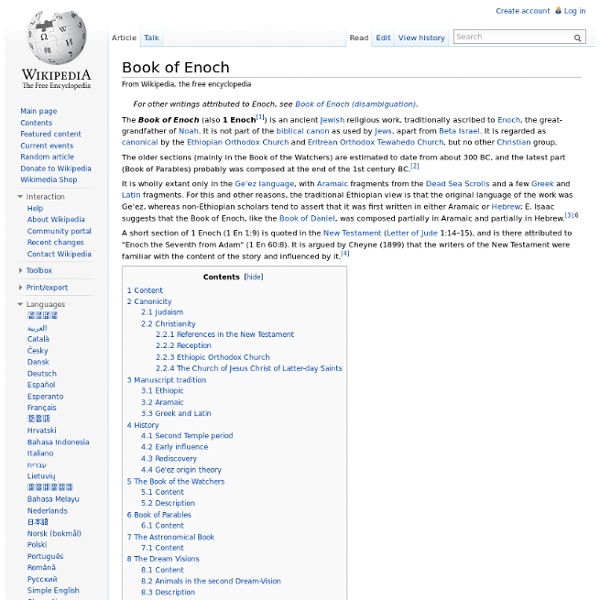 The older sections (mainly in the Book of the Watchers) are estimated to date from about 300 B.C., and the latest part (Book of Parables) probably was composed at the end of the first century B.C.[2] It is wholly extant only in the Ge'ez language, with Aramaic fragments from the Dead Sea Scrolls and a few Greek and Latin fragments. For this and other reasons, the traditional Ethiopian belief is that the original language of the work was Ge'ez, whereas non-Ethiopian scholars tend to assert that it was first written in either Aramaic or Hebrew; E. Isaac suggests that the Book of Enoch, like the Book of Daniel, was composed partially in Aramaic and partially in Hebrew.[3]:6 No Hebrew version is known to have survived. The authors of the New Testament were familiar with the content of the story and influenced by it:[4] a short section of 1 Enoch (1 En 1:9) is quoted in the New Testament (Letter of Jude 1:14–15), and is attributed there to "Enoch the Seventh from Adam" (1 En 60:8). Peter H.

Jubilees The Book of Jubilees, sometimes called Lesser Genesis (Leptogenesis), is an ancient Jewish religious work of 50 chapters, considered canonical by the Ethiopian Orthodox Church as well as Bete Israel (Ethiopian Jews), where it is known as the Book of Division (Ge'ez: Mets'hafe Kufale). Jubilees is considered one of the pseudepigrapha by Protestant, Roman Catholic, and Eastern Orthodox Churches.[1] It was well known to Early Christians, as evidenced by the writings of Epiphanius, Justin Martyr, Origen, Diodorus of Tarsus, Isidore of Alexandria, Isidore of Seville, Eutychius of Alexandria, John Malalas, George Syncellus, and George Kedrenos. The text was also utilized by the community that originally collected the Dead Sea Scrolls. It was so thoroughly suppressed in the 4th century that no complete Hebrew, Greek or Latin version has survived. There is conjecture among western biblical scholars that Jubilees may be a rework of material found in the canonical books of Genesis and Exodus.

Meqabyan I, II, and III Meqabyan (Ge'ez: መቃብያን, sometimes spelled Makabian) are three books in the Ethiopian Orthodox Old Testament Biblical canon. Although these books are completely different in content from the books of Maccabees in Catholic and Eastern Orthodox Bibles, they are sometimes referred to as Ethiopic Maccabees or Ethiopian Maccabees. The "Maccabees" described in these books are not those of the Hasmonean dynasty, and the "Five Holy Maccabean Martyrs" here do not correspond to the martyred "woman with seven sons", who were also referred to as "Maccabees" and are revered throughout Orthodoxy as the "Holy Maccabean Martyrs".[1] These three books long existed only in Ethiopic, but have recently been translated into standard English by Feqade Selassie. The Book of First Meqabyan has 36 chapters. It begins: "In the days of the Moabites and Medes". References[edit] Feqade Selassie, Ethiopian Books of Meqabyan 1–3, in Standard English 2008, Lulu.com External links[edit]

Book of Genesis The Book of Genesis (from the Latin Vulgate, in turn borrowed or transliterated from Greek γένεσις, meaning "origin"; Hebrew: בְּרֵאשִׁית‎, Bərēšīṯ, "In [the] beginning") is the first book of the Hebrew Bible (the Tanakh) and the Christian Old Testament.[1] Structure[edit] Summary[edit] The Angel Hinders the Offering of Isaac (Rembrandt, 1635) God creates the world in six days. Later after the great flood, God divided the languages of the humans after they were deciding to live together and build a great towered city from atop of the heavens which displeased God. God instructs Abram (the future Abraham) to travel from his home in Mesopotamia (modern Iraq) to the land of Canaan. Sarah is barren, and tells Abraham to take her Egyptian handmaiden, Hagar, as a second wife. God tests Abraham by demanding that he sacrifice Isaac. Composition[edit] Abram's Journey from Ur to Canaan (József Molnár, 1850) Origins[edit] This leaves the question of when these works were created. Genre[edit] Themes[edit]

Dead Sea Scrolls The Dead Sea Scrolls are a collection of 981 texts discovered between 1946 and 1956 at Khirbet Qumran in the West Bank. They were found inside caves about a mile inland from the northwest shore of the Dead Sea, from which they derive their name.[1] Nine of the scrolls were rediscovered at the Israel Antiquities Authority (IAA) in 2014, after they had been stored unopened for six decades following their excavation in 1952.[2][3] The texts are of great historical, religious, and linguistic significance because they include the earliest known surviving manuscripts of works later included in the Hebrew Bible canon, along with deuterocanonical and extra-biblical manuscripts which preserve evidence of the diversity of religious thought in late Second Temple Judaism. Due to the poor condition of some of the Scrolls, not all of them have been identified. Discovery[edit] Qumran cave 4, where ninety percent of the scrolls were found Initial discovery (1946–1947)[edit] Scrolls and fragments[edit]

Babylon Babylon (Arabic: بابل‎, Bābil; Akkadian: Bābili(m);[1] Sumerian logogram: KÁ.DINGIR.RAKI;[1] Hebrew: בָּבֶל, Bāḇel;[1] Ancient Greek: Βαβυλών Babylṓn; Old Persian: 𐎲𐎠𐎲𐎡𐎽𐎢 Bābiru) was originally a Semitic Akkadian city dating from the period of the Akkadian Empire circa. 2300 BC. Originally a minor administrative center, it only became an independent city-state in 1894 BC in the hands of a migrant Amorite dynasty not native to ancient Mesopotamia. The Babylonians were more often ruled by other foreign migrant dynasties throughout their history, such as by the Kassites, Arameans, Elamites and Chaldeans, as well as by their fellow Mesopotamians, the Assyrians. The remains of the city are found in present-day Hillah, Babil Governorate, Iraq, about 85 kilometres (53 mi) south of Baghdad. Available historical resources suggest that Babylon was at first a small town which had sprung up by the beginning of the 2nd millennium BC (circa 2000 BC). Name History Classical dating Assyrian period

Mesopotamia Map showing the extent of Mesopotamia Mesopotamia (from the Ancient Greek: Μεσοποταμία: "[land] between rivers"; Arabic: بلاد الرافدين‎ (bilād al-rāfidayn); Syriac: ܒܝܬ ܢܗܪܝܢ (Beth Nahrain): "land of rivers") is a name for the area of the Tigris–Euphrates river system, corresponding to modern-day Iraq, Kuwait, the northeastern section of Syria and to a much lesser extent southeastern Turkey and smaller parts of southwestern Iran. Widely considered to be the cradle of civilization in the West, Bronze Age Mesopotamia included Sumer and the Akkadian, Babylonian, and Assyrian empires, all native to the territory of modern-day Iraq. In the Iron Age, it was controlled by the Neo-Assyrian and Neo-Babylonian empires. The indigenous Sumerians and Akkadians (including Assyrians and Babylonians) dominated Mesopotamia from the beginning of written history (c. 3100 BC) to the fall of Babylon in 539 BC, when it was conquered by the Achaemenid Empire. Etymology Geography History Periodization Literature