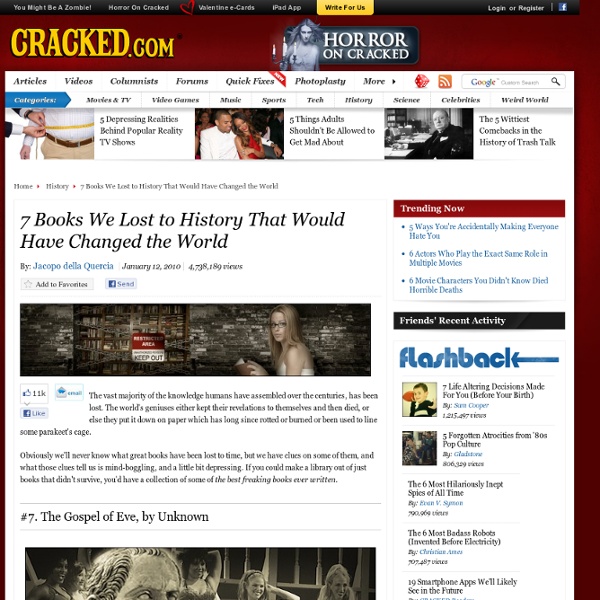 The vast majority of the knowledge humans have assembled over the centuries, has been lost. The world's geniuses either kept their revelations to themselves and then died, or else they put it down on paper which has long since rotted or burned or been used to line some parakeet's cage. Obviously we'll never know what great books have been lost to time, but we have clues on some of them, and what those clues tell us is mind-boggling, and a little bit depressing. If you could make a library out of just books that didn't survive, you'd have a collection of some of the best freaking books ever written. The Gospel of Eve, by Unknown What is it: It is apparently a totally sexually perverse lost book of the Bible. (Wait, what? Why it's Awesome: Ah ha! Why You'll Never Read It: In the 4th Century church officials like Epiphanius lashed out at the book, apparently having nothing better to do than stop everyone from having sex and eating a little bit of semen. Heh heh heh. [Artist's depiction.]

7 Insane Ways Music Affects The Body (According to Science) The world is chock full of ear hurt that some people willingly refer to as music. The Jonas Brothers, Lady Gaga, Conway Twitty; they all produce high quality records and 8-tracks for our enjoyment whether we like it or not. But music--even terrible music--has a stunning amount of power over our bodies. For instance science says music can... Slapping neuroscience right across the face, music is able to take stroke, lesion or other brain-damaged patients who have lost the partial ability to see or speak and return it to them. The Kenny Rogers Effect--not named because it deals with gorging yourself on chicken or replacing your old, grandfatherly face with a shiny new rubber one--takes patients with visual neglect, the inability to recognize half of what they see, and lightens the effects of the damage.

7 Lost Bodies of Work (That Would Have Changed Everything) The Rest of the Canterbury Tales Chaucer's Canterbury Tales is one of--if not the--seminal work of English literature, written by an author second only to William Shakespeare in influence on the English language (particularly when it came to fart jokes). Just about everything written by the man changed the English-speaking world forever. He basically raised the English language from its reputation as the barbarian dialect of mud-shoveling peasants to the lofty level of Latin or Italian in literature, poetry, witticism, satire and all manner of subjects concerning asses and the gasses that come from asses. So What Happened? Chaucer's Canterbury Tales was expected to clock in at anywhere between 100 and 120 chapters.

7 Lost Bodies of Work (That Would Have Changed Everything) History has one hell of a chronic problem when it comes to keeping some of the greatest triumphs in human achievement safe from the triumphs of greater assholes. As a result, a whole lot of the most important stuff humans have ever created has been destroyed or lost. Here are a few of the works of art, literature and science that would have been some of the most influential in history, had they lasted long enough. The (Supposed) Lost Sayings of Jesus The Secret of Oz From AbundantHope.net The Secret of Oz By Ron Chapman & Bill Still Nov 1, 2010 - 10:26:57 PM The Secret of Oz L Frank Baum wrote the Wizard of Oz. – 1900 There's more than one plausible interpretation of the meaninhg of the Wizard of Oz story.

Neil deGrasse Tyson Lists 8 (Free) Books Every Intelligent Person Should Read A Reddit.com user posed the question to Neil deGrasse Tyson: “Which books should be read by every single intelligent person on the planet?” Below, you will find the book list offered up by the astrophysicist, director of the Hayden Planetarium, and popularizer of science. Where possible, we have included links to free versions of the books, all taken from our Free Audio Books and Free eBooks collections. Or you can always download a professionally-narrated book for free from Audible.com.

7 Books We Lost to History That Would Have Changed the World Hermocrates, by Plato What is it: The rumored third book to Plato's little unified field theory trilogy. The first two were Timaeus and Critias and are basically transcriptions of one of the greatest, most influential thinkers to ever live discussing how the universe, uh, happened. 5 Authors More Badass Than The Badass Character They Created When you read a story of a manly hero slaying a dragon and then bedding the princess, it's easy to imagine there's a 300-pound author sitting behind the typewriter in a tiny apartment full of cats. After all, fiction is all about escaping our real life, right? Not always. In fact, if you look at the authors behind some of the most iconic heroes of all time, you find a writer who's every bit as badass. Not only did these guys insert elements from their actual lives into the stories, they actually toned them down a bit. We're talking about the creators of characters like...

Hemp: American History Revisited: The Plant with a Divided History - Robert Deitch books.google.co.uk - Who put the Hemp in Hempstead? Before the cotton gin, hemp was King. This colorful socio-economic history clears the smoke obscuring hemp's role in battles between Crown and Colony, North & South, the marijuana lobby and their foes.... American History Revisited Page 2 World Without Cancer (book) By G. Edward Griffin. Mr. Griffin marshals the evidence that cancer is a deficiency disease—like scurvy or pellagra—aggravated by the lack of an essential food compound in modern man’s diet. That substance is vitamin B17. In its purified form developed for cancer therapy, it is known as Laetrile.

30 Books Everyone Should Read Before Their 30th Birthday The Web is grand. With its fame for hosting informative, easy-to-skim textual snippets and collaborative written works, people are spending more and more time reading online. Nevertheless, the Web cannot replace the authoritative transmissions from certain classic books that have delivered (or will deliver) profound ideas around the globe for generations. The 30 books listed here are of unparalleled prose, packed with wisdom capable of igniting a new understanding of the world.

69 Awesome Brain Hacks That Give You Mind-Blowing Powers #49. You Can Tell How Much Someone Drinks From Their Eye Color There comes a time in every man's life when it will be necessary to drink another guy under the table. Maybe you're trying to win a bet, or prove your manliness, or maybe you're in a terrible rom-com and the only thing that stands between you and the woman you love is the varsity liquor drinking team that challenged you to a duel. We don't know ... we don't write the rules. We merely follow them to their inevitable, disastrous conclusion. 6 Classics Despised by the People Who Created Them British author and playwright A. A. Milne wrote the two original Winnie the Pooh books in the 1920s for his young son, basing the stories on the boy's stuffed animals.

Related:  Books • next books • Totally legit research
Related:  Cool Shit to Know   -  800 Literature   -  Routeurs 800   -  Vintage Vinyl:Steal This Book   -  News and Technological Information | Information about anything and everything   -  Book of Enoch - Wikipedia, the free encyclopedia   -  6 Factors That Secretly Influence Who You Have Sex With   -  Android Arts   -  English language did you knows   -  174,203 Things You Can Do Instead of Watching TV | Whole9   -  One Sentence archive   -  Top 10 Ancient Aliens Mysteries - Listverse   -  13 Interesting Facts about Dreams | Tasty Human   -  Visualizing The Size And Scale Of Our World   -  7 Books We Lost to History That Would Have Changed the World | Cracked.com   -  Thanksgiving as a kid VS Thanksgiving as an adult - The Oatmeal   -  :: procatinator ::   -  Problem loading page   -  The 10 Most Puzzling Ancient Artifacts   -  All Your Memes In Our Base - Funny Memes   -  Chuck+Norris.gif (GIF Image, 350 × 196 pixels)   -  What cannabis actually does to your brain   -  Quiet Lion Creations by Allison Beth Cooling: Chan Luu Single Wrap Macrame Bracelet   -  BioLite CampStove | Order Today   -  14 Stories That Prove Animals Have Souls   -  Einstein's Puzzle   -  Leather + Cut Metal Necklace   -  LookWhatMelissaMade.com   -  tour   -  9 Overlooked Technologies That Could Transform The World   -  Don't Drink it Though - Cheezburger   -  8tracks internet radio | Free music playlists | Best app for music   -  Drawing Board   -  PICTURE JOKES » Just some advice :)   -  There's More to Life Than Being Happy   -  19 Outstanding Words You Should Be Working Into Conversation | Mental Floss   -  60 of the world's happiest facts   -  40 Random Astonishing Facts To Increase Your Trivia | StingFeed   -  Awesome Inventions - Your daily dose of geeky gadgets!   -  nick reboot | feed your inner child