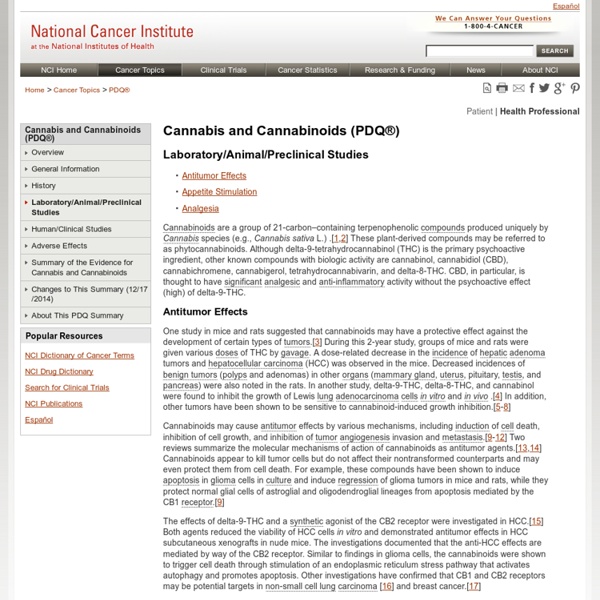 What's new in colorectal cancer research and treatment? Research is always going on in the area of colorectal cancer. Scientists are looking for causes and ways to prevent colorectal cancer as well as ways to improve treatments. Genetics Tests (including Oncotype Dx® Colon Cancer Assay, ColoPrint®, and ColDx™) have been developed that look at the activity of many different genes in colon cancer tumors. These tests can be used to help predict which patients have a higher risk that that the cancer will spread. Staging Researchers have developed a test that can find areas of colon cancer spread in nearby lymph nodes that wouldn’t have been found with the test normally used. Treatment Newer surgery techniques Surgeons are continuing to improve their techniques for operating on colorectal cancers. Laparoscopic surgery is done through several small incisions in the abdomen instead of one large one, and it's becoming more widely used for some colon cancers. Chemotherapy Different approaches are being tested in clinical trials, including: Targeted therapy

Treatment of rectal cancer by stage The main treatment for rectal cancers that have not spread to distant sites is usually surgery. Additional treatment with radiation and chemotherapy (chemo) may also be used before or after surgery. Stage 0 At this stage the cancer has not grown beyond the inner lining of the rectum. Removing or destroying the cancer is all that is needed. Stage I In this stage, the cancer has grown through the first layer of the rectum into deeper layers but has not spread outside the wall of the rectum itself. Stage I includes cancers that were part of a polyp. For other stage I cancers, surgery is usually the main treatment. For some small T1 stage I rectal cancers, another option may be removing them through the anus without an abdominal incision (transanal resection or transanal endoscopic microsurgery). If you are too sick to have surgery, you may be treated with radiation therapy. Stage II Many of these cancers have grown through the wall of the rectum and may extend into nearby tissues. Stage III

Cannabidiol (CBD): Fighting Inflammation & Cancers Cannabis contains at least 60 known chemicals called cannabinoids, which activate naturally occurring cannabinoid receptors in your body. Tetrahydrocannabinol, or THC, is the main component responsible for the psychoactive effects, or “high,” cannabis is known for. While THC is known to have some medicinal value, there has been recent investigation into a new cannabinoid that is rumored to have more medicinal benefits than any single pharmaceutical drug on the market. What is Cannabidiol (CBD)? This cannabinoid is known as Cannabidiol (CBD), and is the second most abundant cannabinoid in cannabis. While it was originally believed that THC is a breakdown product of CBD, it is now known that both THC and CBD are actually metabolites of their decarboxylated acidic forms, THCa and CBDa. “After years of growers aiming to boost THC percentages in their crops, many growers have switched to focusing on producing CBD-rich strains because of the increasing demand by medical users.” Dr.

Regulation of nausea and vomiting by cannabinoids. CBD Oil — That’s All You Need, Right? Since Governor Nixon signed Missouri’s House Bill 2238 a few weeks ago, many people have been asking questions about the first law to allow cannabis in our state since WWII. Suddenly, soccer moms everywhere are hearing about this amazing new substance from the marijuana plant that saves the lives of toddlers and doesn’t get anyone “high.” Seemingly, there is a way for legalization’s opponents to address all of this marijuana business in one fell swoop without anyone putting smoke in their lungs or falling into a senseless fit of horrid, cannabis-induced giggles. It’s easy to understand getting swept up in the bright lights of cannabis once you see them. A moment of crystallization occurs when someone really understands for the first time that cannabis saves lives, and the possibility of a plant-based panacea suddenly seems real. But cannabis is not everything you want it to be. What I mean is that we are still learning. But CBD isn’t just good for seizures. Not exactly. Dr.

My Natural Sweeteners of Choice In the past, I’ve railed against agave nectar, truvia and splenda. I’ve even dogged on natural sweeteners because — let’s face it — on a metabolic level too much sugar is bad for you. “I get it. I really do. But I still want to know which natural sweeteners you use. What is A Natural Sweetener? This may seem obvious, but as more and more dubious products hit the market claiming to be “natural” sweeteners, I think it’s time to set the record straight. Agave Nectar? Are you starting to get the idea? Stevia Stevia is an herb that tastes sweet on the tongue without any actual sugar molecules to send your metabolism into a tailspin. That said, the green-leaf stevia is a plant that I have actually grown on my own patio. (Where to buy stevia.) Coconut Sugar and/or Sucanat/Muscovado I use these in baked goods or other recipes that call for granulated sugar. (Where to buy coconut palm sugar.) Raw Honey (Where to buy organic, raw honey.) Maple Syrup (Where to buy maple syrup.) Sorghum Syrup Related

Doctor's Review | The long and short of bimodal sleep Our not-so-distant ancestors had no trouble getting to sleep at night. In fact, they did it more than once. "Bimodal sleep," as it's called now, may have been their answer to not only sweet dreams, but to a deeper overall sense of peace. Sleep historian Roger Ekrich knew he was onto something when he started keeping track of references to "two sleeps" in old books, diaries, medical papers and hundreds of other documents, including the Bible. First or "deep" or "dead" sleep, as it was sometimes called, often seems to have taken place shortly after sunset, or at least before 10 in the evening. Ekrich was struck by the ordinariness of the mention of first and second sleeps, as though it were a practice so commonplace as to be truly unworthy of explanation. One thing was clear: the absolute darkness and silence of the hour made it a perfect time for prayer. An odd handful of modern creatives have extolled the virtues of what is today considered an eccentric practice. Loss of wathfullness

InsidersHealth.com There have been reports of extraordinary life spans in some individuals, notably in inhabitants of the island of Sardinia where, it is believed, a larger proportion of men than anywhere else in the world survive to 100-plus. According to recent studies, Sardinia is the best place for grandfather! Our Guinness Record is to have more then 135 ultra-centenarian per million inhabitants and this is an underestimation. There, surprisingly, the men and women longevity ratio is 1:1 while all over the world it's 1:7. The great strength of this beautiful island is the almost pollution free environment and the natural food for a balanced diet. In the village of Tiana in the Sardinian mountains Antonio Todde celebrated his 112th birthday on January 22 this year. Antonio is a shepherd living high in the mountains, where he has welcomed hundreds of pilgrims wishing to congratulate him on his extraordinary longevity. Everything here lasts." Dr. Dr. "You mean he has the arteries of a 50-year-old?"

Did the 2009 American Recovery and Reinvestment Act affect dietary intake of low-income individuals? a Pacific Institute for Research and Evaluation, United Statesb Department of Economics Hunter College, CUNY, United Statesc National Center for Health Statistics, United States Received 19 March 2015, Revised 7 August 2015, Accepted 24 August 2015, Available online 29 August 2015 Choose an option to locate/access this article: Check if you have access through your login credentials or your institution Check access doi:10.1016/j.ehb.2015.08.006 Get rights and content Highlights The 2009 American Recovery and Reinvestment Act (ARRA) increased Supplemental Nutritional Assistance Program (SNAP) benefits. SNAP benefit increases were not associated with overall changes in diet quality for the full sample of those eligible for the program. Among those eligible for SNAP with a high school or lower education, diet quality declined among some who already had poor diet quality. Abstract Keywords Supplemental Nutritional Assistance Program; Diet quality

Calcium Not as Great for Bones as Once Thought Calcium has long been touted as a bone-boosting mineral, but the latest evidence confims that consuming more of it may not have the effects experts once thought, according to two new reports from New Zealand. The reports, both published today (Sept. 29) in the journal BMJ, looked at the effects of calcium intake on bone density and risk of fracture in adults over age 50. In the first report, researchers analyzed the results of 59 previous randomized controlled trials of calcium involving more than 12,000 people. The investigators found that increasing calcium intake — either through diet or by taking supplements — increased people's bone-mineral density by up to 2 percent. In the second analysis, researchers looked at more than 40 studies of people's diets, and found no link between the amount of calcium people consumed and their risk of fracture. These are not the first studies to suggest that consuming extra calcium may not improve bone health. A 2013 report from the U.S.

Researchers create self-propelled powder to stop bleeding UBC researchers have created the first self-propelled particles capable of delivering coagulants against the flow of blood to treat severe bleeding, a potentially huge advancement in trauma care. "Bleeding is the number one killer of young people, and maternal death from postpartum hemorrhage can be as high as one in 50 births in low resource settings so these are extreme problems," explains Christian Kastrup, an assistant professor in the Department of Biochemistry and Molecular Biology and the Michael Smith Laboratories at the University of British Columbia. Traditional methods of halting severe bleeding are not very effective when the blood loss originates inside the body like the uterus, sinus or abdomen. "People have developed hundreds of agents that can clot blood but the issue is that it's hard to push these therapies against severe blood flow, especially far enough upstream to reach the leaking vessels. Error loading skin: Error loading file

New study says 30 minutes of exercise a day is not enough. You should double or quadruple that. (iStock) If you're among of the millions of Americans who dutifully carve out 30 minutes a day for the moderate-intensity exercise recommended by experts based on the idea that you're doing all you can for your heart, you're in for some disappointing news. A new analysis published Monday in the journal Circulation finds that that amount of activity may not be good enough. For the paper, researchers reviewed 12 studies involving 370,460 men and women with varying levels of physical activity. [Scientists: Why running makes you so happy] They found that those following the 30-minutes-a-day guidelines issued by the American Heart Association had “modest reductions” in heart failure risk compared to those who did not work out at all. But those who exercised twice and four times as much had “a substantial risk reduction" of 20 percent and 35 percent, respectively. The findings challenge the notion of a 30-minutes-a-day magic number for exercise. Jarett D. This post has been updated. Read more: