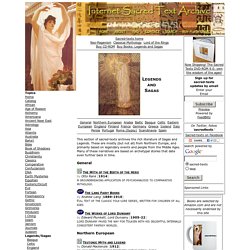 These are mostly (but not all) from Northern Europe, and primarily based on legendary events and people from the Middle Ages. Many of these narratives are based on archetypal stories that date even further back in time. General The Myth of the Birth of the Hero by Otto Rank [1914]A groundbreaking application of psychoanalysis to comparative mythology. The Lang Fairy Books by Andrew Lang [1889-1910]Full text of the classic folk-lore series, written for children of all ages The Works of Lord Dunsany by Edward Plunkett, Lord Dunsany [1905-22]Lord Dunsany paved the way for Tolkien with his delightful internally consistent fantasy worlds. Baltic.

Dispelling Myths About Wicca and Paganism. There are many misconceptions out there about Pagans and Paganism as well as Wicca and Wiccans. 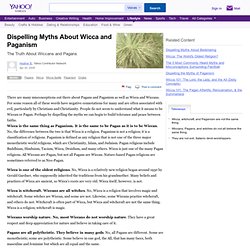 For some reason all of these words have negative connotations for many and are often associated with evil, particularly by Christians and Christianity. People do not seem to understand what it means to be Wiccan or Pagan. Perhaps by dispelling the myths we can begin to build tolerance and peace between faiths. Wicca is the same thing as Paganism. It is the same to be Pagan as it is to be Wiccan. Wicca is one of the oldest religions. Wicca is witchcraft. Wiccans worship nature. Pagans are all polytheistic. Wiccans and Pagans are Satanic and evil. Wiccans and Pagans believe in human and animal sacrifice. Wiccans are all vegetarian. Pagans all share the same opinion on political issues and morality. Wicca comes from the word wicked. Wiccans all worship nude or dressed in black. Godchecker.com - Your Guide To The Gods. The Emerald Tablets of Thoth. 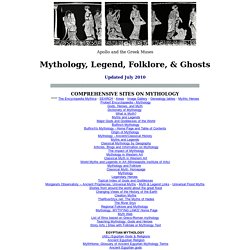 The 10 Most Puzzling Ancient Artifacts. The Bible tells us that God created Adam and Eve just a few thousand years ago, by some fundamentalist interpretations. 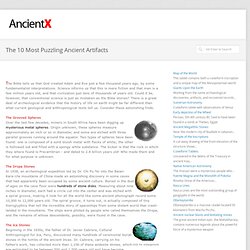 Science informs us that this is mere fiction and that man is a few million years old, and that civilization just tens of thousands of years old. Could it be, however, that conventional science is just as mistaken as the Bible stories? There is a great deal of archeological evidence that the history of life on earth might be far different than what current geological and anthropological texts tell us. Consider these astonishing finds: The Grooved Spheres Over the last few decades, miners in South Africa have been digging up mysterious metal spheres. The Dropa Stones In 1938, an archeological expedition led by Dr. The Ica StonesBeginning in the 1930s, the father of Dr.

The Antikythera MechanismA perplexing artifact was recovered by sponge-divers from a shipwreck in 1900 off the coast of Antikythera, a small island that lies northwest of Crete. The Bosnian Pyramids. 1/5.