7 Insane Ways Music Affects The Body (According to Science) 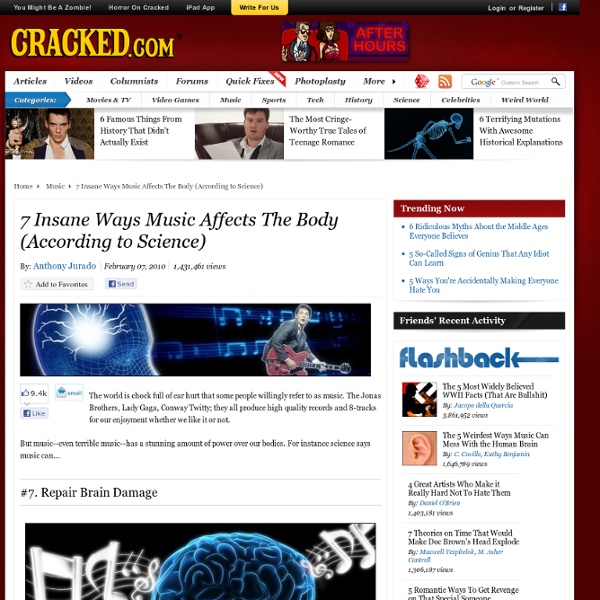 The world is chock full of ear hurt that some people willingly refer to as music. The Jonas Brothers, Lady Gaga, Conway Twitty; they all produce high quality records and 8-tracks for our enjoyment whether we like it or not. But music--even terrible music--has a stunning amount of power over our bodies. For instance science says music can... Slapping neuroscience right across the face, music is able to take stroke, lesion or other brain-damaged patients who have lost the partial ability to see or speak and return it to them. The Kenny Rogers Effect--not named because it deals with gorging yourself on chicken or replacing your old, grandfatherly face with a shiny new rubber one--takes patients with visual neglect, the inability to recognize half of what they see, and lightens the effects of the damage. As long as she's dancing to Kenny Rogers... Patients with left-side brain damage who can no longer speak can find they are able to sing words, often without trouble or training.

7 Reasons Why You Will Never Do Anything Amazing With Your Life — Life Learning 1 :: Because You Have Not Failed Enough Because you are comfortable in your mediocrity; because you choose not to try. Because it is easier to talk about learning that new (programming?) language as opposed to actually learning it. Because you think everything is too hard or too complicated so you will just “sit this one out”, or maybe you’ll, “do-it-tomorrow”! Because you hate your job but won’t get a new one; because it is easy to reject rejection. Because while you’re sitting around failing to try, I am out there trying to fail, challenging myself, learning new things and failing as fast as possible. Because as I fail, I learn, and then adjust my course to make sure my path is always forward. 2 :: Because You Care What Others Think About You Because you have to fit in. Because you believe that being different is only cool if you’re different in the same way that other people are different. Because you are afraid to embrace your true self for fear of how the world will see you.

47 General Psychology Facts I’ve decided to start a series called 100 Things You Should Know about People. As in: 100 things you should know if you are going to design an effective and persuasive website, web application or software application. Or maybe just 100 things that everyone should know about humans! The order that I’ll present these 100 things is going to be pretty random. So the fact that this first one is first doesn’t mean that’s it’s the most important.. just that it came to mind first. Dr. <div class="slide-intro-bottom"><a href="

8 Ways To Stay Positive About This Goddamn Stupid Recession Hey, did you read that awesome title? I love this recession! Exclamation point! I want to stick my fear boner in this recession, and give it a brood of 10,000 thimble-sized Alexander Hamiltons. This is how I feel about the collapse of our economy. Losing my job in 2008 was the best thing to happen to me since I lost my job in 2001. So allow me to inspire the fuck out of you. I Have All This Free Time! You never realize how much of your life you spend at work, until you're out of it. Paul Newman died?? My days are not planned out around the lunch breaks and tee-times of some higher up. I'm Making New Friends! Since I don't have an office to commute to anymore, I'm getting to know the people in my neighborhood. Doris requests that I give her privacy while she cooks. I've even found a local watering hole just like the bar on Cheers. I'm Investing in My Future! I'm not just hanging around, waiting to hear back from all the jobs I've applied for. I'm Dating an Awesome New Woman!

Public Speaking Tips In my mind, there are two kinds of attention: neck down, and neck up. Neck-up attention is when the listener has to make an effort to pay attention. Neck-down attention is when the listener is riveted to the speaker: she can't help but pay attention. Please note that, in our language of English, attention is paid because attention is a valuable currency. Here are 10 techniques that are guaranteed to earn you more attention without losing any of your professional credibility. 1. Start with a bang, not a whimper. "We stand today at a place of battle, one that 40 years ago saw and felt the worst of war." Each of these opening lines makes us lean in, lend an ear, and wonder where the speaker will take us. 2. Now that you've gotten listeners' attention with your magnetic opening, make the story about them. "Ring around the collar," was a 1968 ad in which a housewife protected her husband from loss of social status and career disaster by using Whisk on his shirts. 3. Show a prop. 4. 5. 6. 7.

DISCERN Artificial Neural Network - How to Build a Schizophrenic Computer Justin Ruckman/Flickr Advertisement - Continue Reading Below Schizophrenia is one of the most infamous and mysterious mental disorders. Attempting to get to the root of the problem, scientists recently came up with an extraordinary solution: They built a schizophrenic computer. People who suffer from schizophrenia often have difficulty thinking logically or discerning what is real or not real in their lives. To make a schizophrenic computer, they began with an artificial neural network called DISCERN that Miikkulainen has been working on intermittently since the 1990s. Hoffman and his colleagues then started to tell simple stories to the computer. In DISCERN, the process begins in a module called the sentence parser, which examines each sentence one word at a time. Once the computer system could "understand" a story, the researchers began to feed stories to it. Then, it was DISCERN's job to repeat the tales back to the scientists.

6 Movie Monsters That Just Wouldn't Work Here at Cracked, we take science fiction movies very, very seriously. So when a creature flick comes along that is so preposterously ridiculous, so patently absurd, so monstrously unscientific ... well, we don't actually notice until years later when we need a premise for an article. But then we have no choice but to feel betrayed and scream "BULLSHIT!" at the top of our lungs. As seen in: Alien It latched on to a guy's mouth and pumped its offspring down his throat, which later burst out of the poor fool's chest. Why We Call Bullshit: What do aliens eat? Alien tries to bullshit its way around this by saying that the Alien's DNA merges with the host; this becomes totally ridiculous when you realize that, despite sharing a good 99.9 percent of our DNA with chimps, we're still genetically incompatible with the fuckers. Hello, ladies. As seen in: Return of the Jedi There's no way the Sarlacc could get enough sustenance to survive. Enjoy your sandwich, Sarlacc. As seen in: King Kong, duh Oh, it is.

What's He Saying? 'Bahh' Or 'Fahh'? A Brain Mystery : Krulwich Wonders... I love illusions, where your brain makes weird things happen. Those of you who come here often have seen some doozies, but this one ... oooh, this is one of the strangest. The question is: Which is more powerful, your eyes or your ears? Watch this clip and experience "The McGurk Effect." The McGurk Effect is named for a psychologist from Scotland, Harry McGurk, working with John MacDonald. Not only that, even if your brain knows this is an illusion, you still can't hear the truth unless you close your eyes. Why Does This Happen? Does sight always beat sound? Does anybody know?

The 6 Stupidest Internet Reactions To Shocking News Stories Back in the old days, any shocking news stories would hit the public's consciousness first when a paperboy would shout the lurid headlines at them as they walked to work or tried to get their shoes shined, if old gangster movies are accurate documentaries of early 20th century life. Nowadays they hit the Internet first, and the Internet reacts, as you might expect, stupidly. Here are a few of the most predictable and annoying reactions you'll get on any big story. #6. "This is just another case of ____. Fill in the blank with "someone from X group doing Y stereotypical behavior." Sure, sometimes stories are obviously slow news day stories that deserve the "Why is this news?" Sometimes this comes from well-intentioned people who aren't observant enough to notice what's unusual about the story. That might be a bit extreme, but a lot of simple people can oversimplify a story so that in summary, of course it sounds like a cliche. Shock hipsters are the worst hipsters. #5. #4.

Top 10 Motivational Books of All Time In previous posts, I've identified the most influential business books of all time and the best sales books of all time. In this post, I list the books that drive readers to change their lives, improve their lot, and build better careers. Beware of the final (No. 1) book! 10. While he gets a bit preachy sometimes, Stephen Covey's road map for living doesn't just help you develop better habits. Best quote: "Sow a thought, reap an action; sow an action, reap a habit; sow a habit, reap a character; sow a character, reap a destiny." 9. Prior to Dale Carnegie's classic, mixing business relationships with personal relationships was considered a bit underhanded, like nepotism. Best quote: "The unvarnished truth is that almost all the people you meet feel themselves superior to you in some way, and a sure way to their hearts is to let them realize in some subtle way that you recognize their importance, and recognize it sincerely." 8. 7. Best quote: "If you can't, you must. 6. 5. 4. 3. 2. 1.

10 Psychological Experiments That Went Horribly Wrong Psychology as we know it is a relatively young science, but since its inception it has helped us to gain a greater understanding of ourselves and our interactions with the world. Many psychological experiments have been valid and ethical, allowing researchers to make new treatments and therapies available, and giving other insights into our motivations and actions. Sadly, others have ended up backfiring horribly — ruining lives and shaming the profession. Here are ten psychological experiments that spiraled out of control. 10. Stanford Prison Experiment Prisoners and guards In 1971, social psychologist Philip Zimbardo set out to interrogate the ways in which people conform to social roles, using a group of male college students to take part in a two-week-long experiment in which they would live as prisoners and guards in a mock prison. 9. Wendell Johnson, of the University of Iowa, who was behind the study Theodore Kaczynski, the Unabomber, also seen top 7. 6. 5. 4. 3. 2. 1. David Reimer

The 7 Most Easily Escapable Movie Monsters When victim and movie monster square off, it's not exactly a chess match. Here's seven monsters that anyone with working legs and the IQ of a well-trained Dalmatian could escape. Samara Morgan from The Ring How will she kill you? In the least-straightforward manner possible. How can you win? Well, for the observant victim, Samara's main weakness is that you know when she's going to come get you. Since nobody seems to have tried this, we don't know if she'll wait, biting her non-nails in your cathode ray tube until the new season of Battlestar Galactica starts and you have to come back. Also, maybe try to mess with her. The Predator from Predator How will it kill you? The Predator's weakness is honor. Also, it seems to have a bomb built inside it somewhere, activated by pushing buttons on its wrist. If you can wait until it's asleep and turn that thing on, all you have to do is run. Leatherface from The Texas Chainsaw Massacre How will he kill you? Leatherface is stupid. How can you win?