6 Factors That Secretly Influence Who You Have Sex With 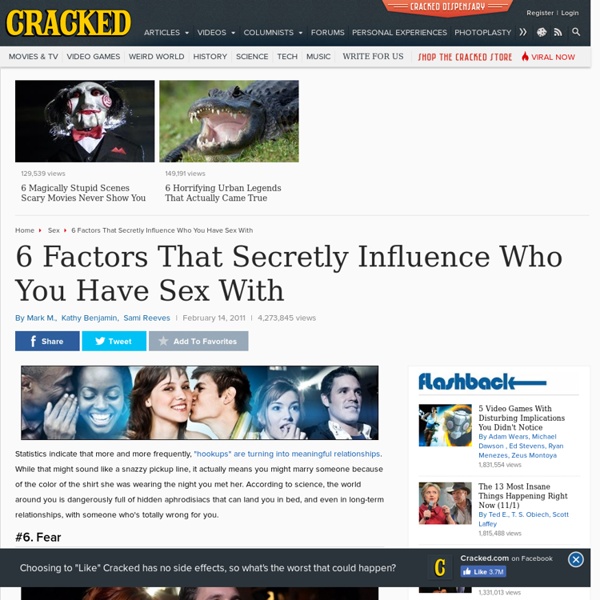 Statistics indicate that more and more frequently, "hookups" are turning into meaningful relationships. While that might sound like a snazzy pickup line, it actually means you might marry someone because of the color of the shirt she was wearing the night you met her. According to science, the world around you is dangerously full of hidden aphrodisiacs that can land you in bed, and even in long-term relationships, with someone who's totally wrong for you. #6. Fear The Romantic Notion: "If two people are meant for one another, it doesn't matter whether they meet in high school or prison -- love will find a way." Science Says: "Did you see a comedy or a horror movie on your first date? We tend to think that emotions such as fear and anger cause our hearts to speed up. Here's where it gets weird. He just crapped his pants, and she's still going to walk away with a crush. In a study by Donald G. Yeah, science is a dick like that. #5. "Looks don't matter. This can, of course, be taken too far. #4.

Making memories last Drosophila Orb2 plays an important role in the persistence of memory. Memories in our brains are maintained by connections between neurons called "synapses". But how do these synapses stay strong and keep memories alive for decades? The finding supports a surprising new theory about memory, and may have a profound impact on explaining other oligomer-linked functions and diseases in the brain, including Alzheimer's disease and prion diseases. "Self-sustaining populations of oligomers located at synapses may be the key to the long-term synaptic changes that underlie memory; in fact, our finding hints that oligomers play a wider role in the brain than has been thought," says Kausik Si, Ph.D., an associate investigator at the Stowers Institute, and senior author of the new study, which is published in the January 27, 2012 online issue of the journal Cell. A portion of the structure is self-complementary and—much like empty egg cartons—can easily stack up with other copies of itself.

New 'smart pills' signal your iPhone -- and more from innovative drug company partnerships Imagine a "smart pill" containing a biodegradable electronic chip that monitors how your body responds to the medicine, broadcasts the information to your iPhone, which then emails the information to your physician. It may sound like science fiction, but drug companies have been studying just such an approach, according to an article in the current edition of ACS's Chemical & Engineering News, the weekly newsmagazine of the American Chemical Society, the world's largest scientific society. In the cover story, C&EN Senior Editor Rick Mullin cites the smart pill venture between Proteus Biomedical, a start-up company in California, and established Swiss drugmaker Novartis as an illustration of the new and nontraditional research partnerships that are being forged. The story cites numerous examples.

Bionic contact lens 'to project emails before eyes' 22 November 2011Last updated at 03:15 By Michelle Roberts Health reporter, BBC News The vision is to stream real-time information in front of the eyes A new generation of contact lenses that project images in front of the eyes is a step closer after successful animal trials, say scientists. The technology could allow wearers to read floating texts and emails or augment their sight with computer-generated images, Terminator-syle. Early tests show the device is safe and feasible, says the University of Washington in Seattle. But there are still wrinkles to iron out, like finding a good power source. Currently, their crude prototype device can only work if it is within centimetres of the wireless battery. And its microcircuitry is only enough for one light-emitting diode, reports the Journal of Micromechanics and Microengineering. Continue reading the main story “Start Quote Our next goal is to incorporate some predetermined text in the contact lens” End QuoteLead researcher Professor Babak Parviz

Depression could be evolutionary byproduct of immune system Depression is common enough – afflicting one in ten adults in the United States – that it seems the possibility of depression must be "hard-wired" into our brains. This has led biologists to propose several theories to account for how depression, or behaviors linked to it, can somehow offer an evolutionary advantage. Some previous proposals for the role of depression in evolution have focused on how it affects behavior in a social context. An outline of their proposal appears online in the journal Molecular Psychiatry. The co-authors are Andrew Miller, MD, William P. "Most of the genetic variations that have been linked to depression turn out to affect the function of the immune system," Miller says. For decades, researchers have seen links between depression and inflammation, or over-activation of the immune system. Infection was the major cause of death in humans' early history, so surviving infection was a key determinant in whether someone was able to pass on his or her genes.

Top 10 Tricks that Give You Power Over Your Body We may control a lot of what our body does, but sometimes it rebels—whether its with brain freeze, a gag reflex, or just plain bad vision. Here are our top 10 body hacks that give the power back to you. P 10. Easily Swallow Stubborn PillsP If you aren't very good at swallowing pills, you can try this trick to get them down: tilt your head forward instead of backward once its in your mouth. 9. SExpand Being able to dilate your pupils at will can help you see the world differently, and there are a number of ways you can go about it—from tensing your stomach in different ways to just focusing on objects that are far away. 8. We all know that tingling feeling you get when your hand or foot goes to sleep, and how annoying it is. 7. When your body feels like its going to overheat from the scorching summer sun, you can lower your body temperature quickly using one of your body's quick cooling spots, like your wrist or the back of your knee. 6. 5. 4. 3. 2. 1.

Tiny reader makes fast, cheap DNA sequencing feasible The various levels of electrical signal from the sequence of a DNA strand pulled through a nanopore reader (top) corresponds to specific DNA nucleotides, thymine, adenine, cytosine and guanine (bottom). Researchers have devised a nanoscale sensor to electronically read the sequence of a single DNA molecule, a technique that is fast and inexpensive and could make DNA sequencing widely available. The technique could lead to affordable personalized medicine, potentially revealing predispositions for afflictions such as cancer, diabetes or addiction. "There is a clear path to a workable, easily produced sequencing platform," said Jens Gundlach, a University of Washington physics professor who leads the research team. "We augmented a protein nanopore we developed for this purpose with a molecular motor that moves a DNA strand through the pore a nucleotide at a time." The researchers previously reported creating the nanopore by genetically engineering a protein pore from a mycobacterium.

Intense light prevents, treats heart attacks There are lots of ways to treat a heart attack – CPR, aspirin, clot-busters and more. Now CU medical school researchers have found a new candidate: Intense light. "The study suggests that strong light, or even just daylight, might ease the risk of having a heart attack or suffering damage from one," says Tobias Eckle, MD, PhD, an associate professor of anesthesiology, cardiology, and cell and developmental biology at the University of Colorado School of Medicine. "For patients, this could mean that daylight exposure inside of the hospital could reduce the damage that is caused by a heart attack." What's the connection between light and a myocardial infarction, known commonly as a heart attack? The answer lies, perhaps surprisingly, in the circadian rhythm, the body's clock that is linked to light and dark. Eckle and Holger Eltzschig, MD, a CU professor of anesthesiology, found that one of those proteins, called Period 2, plays a crucial role in fending off damage from a heart attack.

Scientists turn skin cells into beating heart muscle Immortal Avatar: Russian project seeks to create robot with human brain Founder of the strategic social movement "Russia 2045" Dmitry Itskov (R) and his avatar (27.8Mb) embed video Inspired by director James Cameron’s idea, a Russian businessman has launched his own Avatar project. Hundreds of researchers are involved in creating a prototype of a human-like robot which would be able to contain the human consciousness. ­In creating the Russia 2045 movement, Dmitry Itskov did not mean to use Avatars to explore new planets. His ultimate goal is to make immortality possible by transplanting the brain and its personality into a robotic body. The immortality project consists of four stages, and a team of researchers in the Moscow suburb of Zelenograd is currently working on the first one. So far, scientists are struggling to complete the Avatar-A, a human-like robot controlled through a brain-computer interface. explains chief designer Vladimir Konyshev. ­According to the company’s website, the project consists of four stages. Konyshev told RT. Itskov told RT.

Mad science? A documentary about the research of neuroscientist Robert White goes beyond his macabre head-transplant experiments to highlight his contributions to science Judging by his CV alone, neuroscientist Robert White (1926-2010) appears to have been an accomplished physician/scientist. He performed over 10,000 brain surgeries in his lifetime, authored more than 900 publications, and developed brain cooling techniques that revolutionized modern brain surgery. White even received the Humanitarian Award from the American Association of Neurological Surgeons in 1997. But he is not usually remembered for these achievements. Instead, his name conjures up images of the bizarre animal experiments he performed: In the 1970s, he transplanted an entire monkey head onto another monkey's body.

psychology - Does our brain make ourselves look five times more beautiful than we really are? - Skeptics As has been pointed out in the comment above, the specific claim that we see ourselves as exactly five times more attractive is a little absurd. There are no units measuring beauty, that I am aware of. In social sciences, when the attractiveness of an individual has to be rated, it is rated on a scale where, for example, one would mean low attractiveness and five high attractiveness. Under such scales, everyone in the study would literally have to be of a 5/5 attractiveness and yet rate themselves as a 1/5 attractiveness. That's highly unlikely, to say the least. Leaving at that, however, is leaving much unanswered. That question has an answer, and the answer is yes. According to the authors of The Invisible Gorilla: And Other Ways Our Intuitions Deceive Us, relating the findings of Narcissistic Illusions in Self-Evaluations of Intelligence and Attractiveness, The study itself is unfortunately locked behind a paywall, but the abstract does support this: The result?