Sharp LL-S201A announced. I am one who subscribes to the ideology that bigger is better – and when it comes to working with text and images, it makes perfect sense to have a really large display at your disposal. 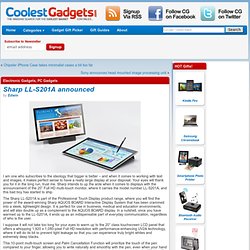 Your eyes will thank you for it in the long run, trust me. Sharp intends to up the ante when it comes to displays with the announcement of the 20” Full HD multi-touch monitor, where it carries the model number LL-S201A, and this bad boy has started to ship. The Sharp LL-S201A is part of the Professional Touch Display product range, where you will find the power of the award-winning Sharp AQUOS BOARD Interactive Display System that has been crammed into a sleek, lightweight design. It is perfect for use in business, medical and education environments, and will also double up as a complement to the AQUOS BOARD display. In a nutshell, once you have warmed up to the LL-S201A, it ends up as an indispensable part of everyday communication, regardless of who is the user. Press Release. Really gangsta songs bout drugs and drug dealing?? The Mercenary Techie Who Troubleshoots for Drug Dealers and Jealous Lovers. Wow, I cant believe Martin convinced people to pay him for this. 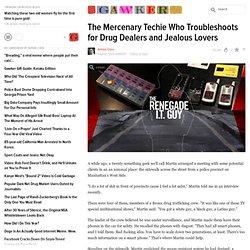 He doesn't even seem to know what he's doing. You can fake location/UDID on a jailbroken iphone, but he has to lug a laptop to a club to check into foursquare? THE OWNER COULD HAVE JUST DONE THAT THROUGH HIS COMPUTER If any of Martin's Clients are reading this, turn the other way and start running, either this guy barely knows anything, or doesn't seriously care about your security and will probably rat you out if given the chance. Sure, a SIM card contains a new number and customer account, but if the phone company or police pulls your IMEI code off your burner, they can use that to discover all SIM previously attached to the phone.

Btw, it takes a few weeks for police to secure a search warrant. Save $3000 on Martin (who will get you thrown in jail), and just use shitty boost phones bought in cash outside of major drug zones. And what about this? Sounds like he's going to screw them over. Pocket Scale Wallets Are For Drug Dealers, Right? Product roadmap: New Intel Bay Trail chips for tablets on the way.

Intel currently offers a handful of Bay Trail chips aimed at tablets, including the Atom Z3770, Z3740, and Z3740D. 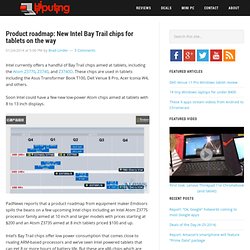 These chips are used in tablets including the Asus Transformer Book T100, Dell Venue 8 Pro, Acer Iconia W4, and others. Soon Intel could have a few new low-power Atom chips aimed at tablets with 8 to 13 inch displays. PadNews reports that a product roadmap from equipment maker Emdoors spills the beans on a few upcoming Intel chips including an Intel Atom Z3775 processor family aimed at 10 inch and larger models with prices starting at $200 and an Atom Z3735 aimed at 8 inch tablets priced $100 and up. Intel’s Bay Trail chips offer low power consumption that comes close to rivaling ARM-based processors and we’ve seen Intel powered tablets that can get 8 or more hours of battery life. But these are x86 chips which are capable of running full Windows 8.1 software, which means you really could use a cheap Bay Trail tablet as a notebook or even desktop replacement. via CPU World. 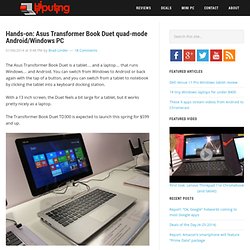 You can switch from Windows to Android or back again with the tap of a button, and you can switch from a tablet to notebook by clicking the tablet into a keyboard docking station. With a 13 inch screen, the Duet feels a bit large for a tablet, but it works pretty nicely as a laptop. The Transformer Book Duet TD300 is expected to launch this spring for $599 and up.

The entry-level price gets you a tablet with a 13.3 inch, 1366 x 768 pixel display, an Intel Core i3 Haswell processor, 64GB of storage, and a keyboard dock with a 320GB hard drive. Asus will also offer higher-priced models with 1920 x 1080 pixel displays and additional storage in both the tablet section and the keyboard dock. Each model has 4GB of RAM, a 38Whr battery, and weighs about 4.2 pounds when you use the tablet and dock together. One thing Asus doesn’t plan to offer is a keyboard dock with a built-in battery.