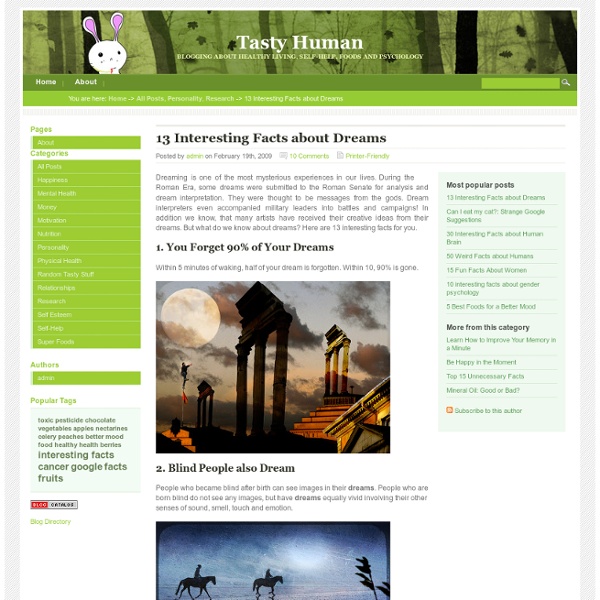 Dreaming is one of the most mysterious experiences in our lives. During the Roman Era, some dreams were submitted to the Roman Senate for analysis and dream interpretation. They were thought to be messages from the gods. 1. Within 5 minutes of waking, half of your dream is forgotten. 2. People who became blind after birth can see images in their dreams. 3. Every human being dreams (except in cases of extreme psychological disorder). 4. Our mind is not inventing faces – in our dreams we see real faces of real people that we have seen during our life but may not know or remember. 5. A full 12% of sighted people dream exclusively in black and white. 6. If you dream about some particular subject it is not often that the dream is about that. 7. The most common emotion experienced in dreams is anxiety. 8. While the content of most dreams is dreamt only once, many people experience recurring dreams—that is, the same dream narrative is experienced over different occasions of sleep. 9. 10. 11.

5 Psychology Studies Every Awkward Teenager Should Read We've demonstrated before that, even according to science, being a teenager sucks. So one could logically assume that if being a normal teenager sucks, then being a shy teenager must be even worse. But if we ever got the chance to go back in time to visit our lonely teenage selves ... well, first off we'd deal them an epic backhanded mouthslap (butterfly effect be damned). #5. Getty Adolescence is the period in everyone's life where the idea of sex metamorphoses from a mysterious concept to an uncomfortable and alarming reality to a baited hook perpetually hanging above your head. Getty"Franklin Kimble: Right in the asshole." In such a hypersexualized environment, it's easy to get depressed when your crushes are less than receptive to your charms (or, in the case of your average shy teenager, your lack thereof). Getty"I waited until I was 30. Getty"I'm gonna give you a big push so you can go on your own for a bit. #4. Getty"That is so hot. Never heard of it? #3.

47 Mind-Blowing Psychological Facts You Should Know About Yourself I’ve decided to start a series called 100 Things You Should Know about People. As in: 100 things you should know if you are going to design an effective and persuasive website, web application or software application. Or maybe just 100 things that everyone should know about humans! The order that I’ll present these 100 things is going to be pretty random. So the fact that this first one is first doesn’t mean that’s it’s the most important.. just that it came to mind first. Dr. <div class="slide-intro-bottom"><a href=" Pamela Meyer: How to Spot a Liar TED and The Huffington Post are excited to bring you TEDWeekends, a curated weekend program that introduces a powerful "idea worth spreading" every Friday, anchored in an exceptional TEDTalk. This week's TEDTalk is accompanied by an original blog post from the featured speaker, along with new op-eds, thoughts and responses from the HuffPost community. Watch the talk above, read the blog post and tell us your thoughts below. Become part of the conversation! Watch Pamela Meyer's talk above about the science of "lie spotting" and how it can lead to a more honest world. Lying: Even t-shirts know how bad it is. The other day a guy walked past me wearing a t-shirt with two words on it: "Everybody lies." Of course it's true. But our deception epidemic is not all cute, funny, and kind. High-stakes lying is out of control. "A lie has no power whatsoever by its mere utterance; its power emerges when someone else agrees to believe the lie." -- Pamela Meyer Our tolerance for truthiness has increased.

Body Language Basics - Syncrat Publishing Throughout history it has been an advantage if an individual can read body language. Body language helps in everyday life from closing a business deal or trusting someone with your life, to recognising when someone is upset. Body language is the art of making an educated guess at a person’s feelings or intentions based on their posture, movement and positioning. To understand a person’s body language you need to take into account more than one aspect of their body language. Take tears for example. Just seeing tears on a person’s face does not tell you much as they could mean a person is happy, sad or just they might just have watery eyes. Each action or stance in the following list means very little, unless there is more than one indicating the same thing. Arms Feet Head Chest Other

How to tell in 15 minutes whether someone likes you - by Bridget Webber Bridget Webber's image for: "Body Language that Shows when someone of the Opposite Sex Fancies you" Caption: Location: Image by: Wouldn't it be great to be able to tell within fifteen minutes whether someone likes you or not? The Eyebrow Raise The eyebrow raise is generally reserved for members of the opposite sex who like what they see, and it happens straight away. The Smile Although smiling can be faked, a genuine smile can easily be separated from a false one. A smile that is more of a grimace, or is delivered with lips firmly shut tight and downward turning corners of the lips, is a concerted effort rather than an indication that someone likes you. The Lean. If you are sat with a person who likes you, he or she is likely to lean in toward you as you converse. If you are standing, a person will stand close to you if he or she likes you, and give you full attention. Feet. Eye Contact Touching. When you like someone, you are drawn to touch him or her, even when you try not to! Mirroring.

"Force Quit" Yourself to Get Your Sleep Schedule Back on Track and Avoid Another Day of Fatigue Your body has to receive triggers as to when it is day & night for your body clock run on. If you shifted continents, you'd still want to stay up later, faking the day/night cues for your body works. Basically, this means if you have DSPD, having the lights on at night is a killer, which is the opposite of what I want, because I don't want to switch them off when I'm feeling wide awake. But, the lights on are exactly what makes my body think it's still day/early evening etc. There's a theory that a good portion of DSPD people are just more sensitive to artificial lighting than everyone else. Monitors are especially bad with the blue light. Wearing amber sunglasses from early evening onwards helps me, melanon, and bright lights that switch on about an hour before I get up in the morning. Oh, and I figured out a work-around for the weekend sleep-in. And I do have to use 'force quitting' in the evening.

What Does Your Body Language Say About You? How To Read Signs and Recognize Gestures - Jinxi Boo - Jinxi Boo Art by LaetitziaAs we all know, communication is essential in society. Advancements in technology have transformed the way that we correspond with others in the modern world. Because of the constant buzz in our technological world, it's easy to forget how important communicating face-to-face is. Body language is truly a language of its own. 10% from what the person actually says40% from the tone and speed of voice50% is from their body language. Lowering one's head can signal a lack of confidence. Pushing back one's shoulders can demonstrate power and courageOpen arms means one is comfortable with being approached and willing to talk/communicate The lowering of the eyes can convey fear, guilt or submissionLowered eyebrows and squinted eyes illustrate an attempt at understanding what is being said or going onA lack of confidence or apprehensiveness can be displayed when you don't look another person in the eyesOne tends to blink more often if nervous or trying to evaluate someone else

How Secure Is My Password? Body Language Signals: Eye Directions, Pupils Warning! Reading body language is like listening to someone. Listed here are the possible meanings of many different body language signs. To avoid getting it wrong, please start with the short section “How Can You Read What People Think?” at the bottom of this page. The Eyes (Part II) - Squint during a conversation –> showing interest - Looking away –> possibly shy –> curious about the surroundings (some people naturally observe their environment more than others) –> showing interest in your other movements. Otherwise, it may be a sign that this person is attracted to you… Basically, looking at other parts of your body is part of the unconscious assessment people make about how suitable you are as a mate… Whether you like it or not, we all do this. How To Read Eye Directions Without going too deep into neuroscience, let’s look at how a person’s eye directions can tell you what they are actually thinking. You have probably heard that there are two main parts to the brain: How can you use this? Why?

A Compendium of 150 Monty Python Sketches 259.2K Flares Google+ 2 Twitter 38 Facebook 513 Reddit 6 StumbleUpon 258.6K Pin It Share 35 35 LinkedIn 1 inShare1 259.2K Flares × My wife requested that I post a particular Monty Python skit on the site. Well, posting just one Python video is right out! No, here at One Man’s Institute for the Exceptional Documentation of Silly Time Wasting Videos we have a rule that one shall post no fewer than 150 videos – and the number of videos posted shall be 150. Therefore, being that my wife is an HR manager and has to interview tons and tons of mackerels, and furthermore since she gets a kick out of Monty Python’s classic Silly Job Interview… RIGHT! (In fact, as I understand it she conducts all of her own interviews in this manner. Additionally, in the spirit of being Halibut, I’ve spent a truly silly amount of time sifting through applicants, while wearing pantys and a bra. Albatross.