Water boarding. Peace isn't profitable. War is peace. Y do u hate us. How to b a piece of shit. Proxies. ISIS dangerous threat. Two US Wars Of Aggression You Probably Never Heard Of. John VibesFebruary 8, 2014. 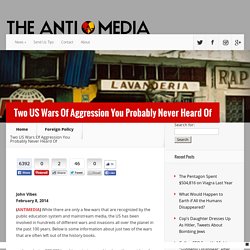 Mass murderer. God & country. In America, Violent Extremism Will Get You a Medal. Quick – what do ISIS and Chris Kyle have in common? 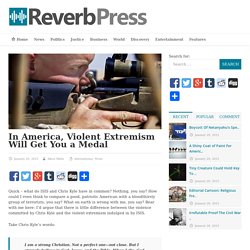 Nothing, you say? How could I even think to compare a good, patriotic American with a bloodthirsty group of terrorists, you say? What on earth is wrong with me, you say? War Is the New Normal: Seven Deadly Reasons Why America’s Wars Persist. It was launched immediately after the 9/11 attacks, when I was still in the military, and almost immediately became known as the Global War on Terror, or GWOT. 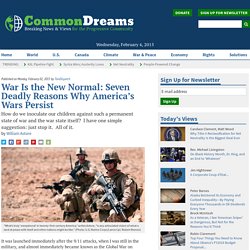 Pentagon insiders called it “the long war,” an open-ended, perhaps unending, conflict against nations and terror networks mainly of a radical Islamist bent. Imperial sniper. Surrounded Iran. Terrorist threat to our freedoms. Stand behind the troops. Follow their orders. Drone operator day. Which terrorist group. Price of oil. The Terrifying Reality of the US Torture Program and Why it Matters to You. Justin King January 19, 2014. 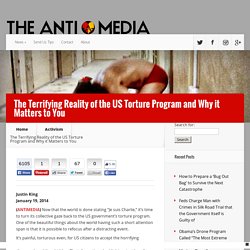 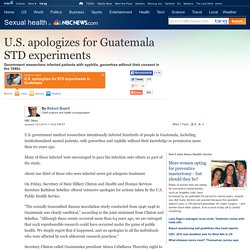 Many of those infected were encouraged to pass the infection onto others as part of the study. About one third of those who were infected never got adequate treatment. On Friday, Secretary of State Hillary Clinton and Health and Human Services Secretary Kathleen Sebelius offered extensive apologies for actions taken by the U.S. Public Health Service. "The sexually transmitted disease inoculation study conducted from 1946-1948 in Guatemala was clearly unethical," according to the joint statement from Clinton and Sebelius.

Secretary Clinton called Guatemalan president Alvara Cabellaros Thursday night to reaffirm the importance of the U.S. relationship with the Latin American country. Story: Horrific medical tests of past raise concerns for today. Torture. Peace on the moon. Irony. For our freedom. Operation paperclip. Budget. Bernie. Dr. David kelly. Neocolonialism. Watch?v=BcNREU8RmWU&feature=youtu. Liberate. 85.4 billion Afghanistan. St to US of Iraq and Afghan wars could hit $6 trillion. $682 billion/yr. Cost of National Security: Counting How Much the U.S. Spends Per Hour. About | Embed | Notes & Sources To embed the Cost of Military Action Against ISIS counter on your website, blog, etc, follow these simple instructions: 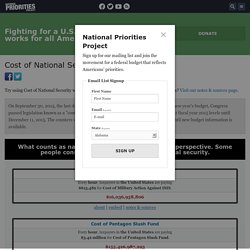 U.S. Military Spending Dwarfs Rest of World. The Pentagon is putting tens of thousands of soldiers, the A-10 and U-2 aircraft, and billions of dollars on the chopping block in the budget proposal outlined by Defense Secretary Chuck Hagel this week. 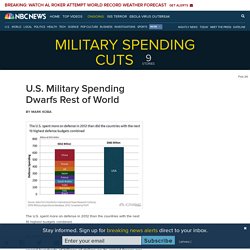 But while the focus is on cuts right now, analysts say it's investment and innovation that will get the military into fighting shape for a high-tech future. What weapons and programs can best ensure U.S. security in a changing world? “It all depends what you think the concept of war in the future is going to be,” said Sam Tangredi, a retired Navy captain who analyzes military policy as a San Diego associate with Strategic Insight, a Washington-based planning-consulting firm.

Paul Scharre, project director for the 20YY Warfare Initiative at the Center for a New American Security, said he was glad to see the budget plan continues development of the long-range bomber in an era when U.S. ships and air bases are targeted by long-range precision guided missles. Unmanned aircraft. Veterans day. Homeless vets. War script. The horrors of war. Suicide. G.W/fallen soldiers. From Wounded Knee To Libya: A Century Of Military Interventions. Above: Mass burial at Wounded Knee in South Dakota. 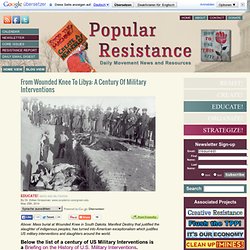 Manifest Destiny that justified the slaughter of indigenous peoples, has turned into American exceptionalism which justifies US military interventions and slaughters around the world. The following is a partial list of U.S. military interventions from 1890 to 2011. The list and briefing are also available as a powerpoint presentation. This guide does not include: Among sources used, beside news reports, are the Congressional Record (23 June 1969), 180 Landings by the U.S. Versions of this list have been published on Zmag.org, Neravt.com, and numerous other websites. Translations of list: Spanish French Turkish Italian Chinese Greek Russian Czech Tamil Portuguese Quotes in Christian Science Monitor and The Independent.

The Video the Pentagon doesn't want you to see! Honoring The Ghosts Of War. Terrorist placement. Watch?v=eRItoiI_dDU&feature=youtu. 9 Tales of Broken Arrows: Thermonuclear Near Misses Throughout History. Fifty-five years ago, on May 22, 1957, a “broken arrow” rattled Albuquerque, New Mexico, frightening residents and killing one very unlucky cow. 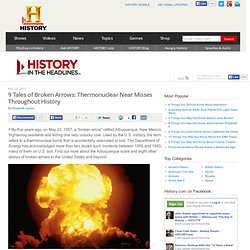 Used by the U.S. military, the term refers to a thermonuclear bomb that is accidentally detonated or lost. The Department of Energy has acknowledged more than two dozen such incidents between 1950 and 1980, many of them on U.S. soil. Find out more about the Albuquerque scare and eight other stories of broken arrows in the United States and beyond. (Credit: Time Life Pictures/Getty Images) 1. 2. Chomsky. Most civilian deaths. America's deadly double tap drone attacks are 'killing 49 people for every kn... 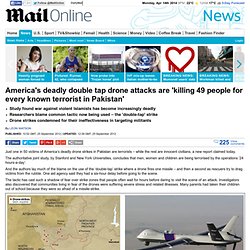 The authoritative joint study, by Stanford and New York Universities, concludes that men, women and children are being terrorised by the operations ’24 hours-a-day’. Oh wait, that's Detroit. Stop arming rebels. Mujahideen. The Real Reason We Are Bombing Syria  The administration's response to the conjunction of this weekend's People's Climate March and the International Day of Peace?

1) Bomb Syria the following day, to wrest control of the oil from ISIS which gained its foothold directly in the region through the U.S., Saudi Arabia, Qatar, Turkey and Jordan funding and arming ISIS' predecessors in Syria. 2) Send the president to UN General Assembly, where he will inevitably give a rousing speech about climate and peace, while the destruction of the environment and the shattering of world peace is on full display 5,000 miles away.

Nothing better illustrates the bankruptcy of the Obama administration's foreign policy than funding groups that turn on the U.S. again and again, a neo-con fueled cycle of profits for war makers and destruction of ever-shifting "enemies. " The US Is Now Involved In 134 Wars. Or none, depending on your definition of 'war'. AP Photo The White House spent much of last week trying to figure out if the word “war” was the right one to describe its military actions against the Islamic State. US Secretary of State John Kerry was at first reluctant: “We’re engaged in a major counterterrorism operation,” he told CBS News on Sept. 11. Marines. Limitless War. This originally appeared in a Politico feature collecting responses to President Obama's recently announced military plan against ISIS. It's strange to think of it now, but when Congress authorized President George W.

Bush to use military force in the wake of the Sept. 11, 2001, terrorist attacks, the authorization was meant to be a limited one. The Bush administration wanted a more sweeping resolution—one that would allow the use of military force against any group, anywhere, that the president believed was planning terrorist attacks against the United States. Repeal the AUMF and End the War on Terror. More than eleven years ago, Congress authorized the Iraq War. This week, the White House voiced its support for finally repealing that authorization, conceding that the law has outlived its usefulness. This is good news. Log In. TV > Terrorists. Barack Obama's Secret Terrorist-Tracking System, by the Numbers. Nearly half of the people on the U.S. government’s widely shared database of terrorist suspects are not connected to any known terrorist group, according to classified government documents obtained by The Intercept. Of the 680,000 people caught up in the government’s Terrorist Screening Database—a watchlist of “known or suspected terrorists” that is shared with local law enforcement agencies, private contractors, and foreign governments—more than 40 percent are described by the government as having “no recognized terrorist group affiliation.”

That category—280,000 people—dwarfs the number of watchlisted people suspected of ties to al Qaeda, Hamas, and Hezbollah combined. The documents, obtained from a source in the intelligence community, also reveal that the Obama Administration has presided over an unprecedented expansion of the terrorist screening system. “If everything is terrorism, then nothing is terrorism,” says David Gomez, a former senior FBI special agent. A milestone. Index.html?EXIT_URI=http%3A%2F%2Fmobile.nytimes.com%2FloginReturn%3Furl%3D%25... Murder called war. Green costumes. America is the terrorist. Help people.