The Experience and Perception of Time 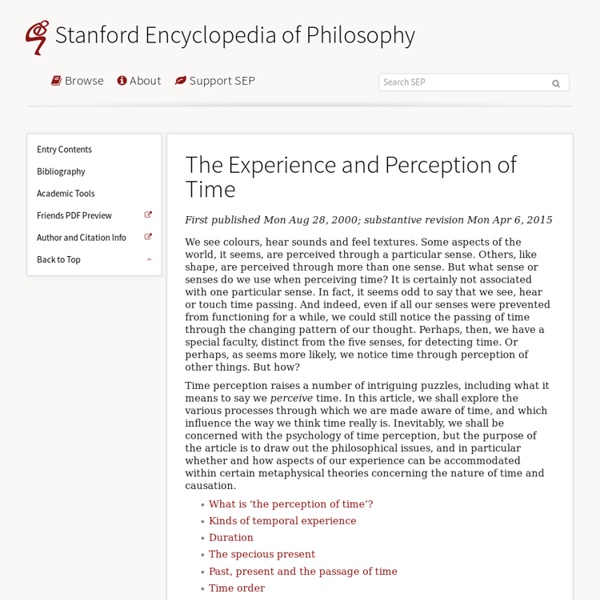 What is ‘the perception of time’? The very expression ‘the perception of time’ invites objection. Insofar as time is something different from events, we do not perceive time as such, but changes or events in time. But, arguably, we do not perceive events only, but also their temporal relations. So, just as it is natural to say that we perceive spatial distances and other relations between objects (I see the dragonfly as hovering above the surface of the water), it seems natural to talk of perceiving one event following another (the thunderclap as following the flash of lightning), though even here there is a difficulty. For what we perceive, we perceive as present—as going on right now. Kinds of temporal experience There are a number of what Ernst Pöppel (1978) calls ‘elementary time experiences’, or fundamental aspects of our experience of time. Duration The inference model may be plausible enough when we are dealing with distant events, but rather less so for much more recent ones.

Lucid Dreaming By lucid dreaming, you can gain complete control over the one place that no one will ever care about: your imagination. Just The Facts Lucid dreaming is a scientifically proven phenomenon. While some get into lucid dreaming in order to treat chronic nightmares, or to experience all facets of the human experience, approximately 99.8% of people use it as a tool for cheap and interactive 3D porn. A lucid dream is a dream in which the dreamer is aware that he or she is dreaming, and he or she can even choose to control and manipulate his or her dream. Dream, dream, dream. Satirical Art Drawings by Pawel Kuczynski Fun Pic, Pop Culture — By Dave on 2011/02/28 1:48 PM These beautiful works of art are from Polish artist Pawel Kuczynski. Pawel was born in 1976 in Szczecin. He graduated the Fine Arts Academy in Poznan with specialization in graphics.

Time passes more slowly for flies, study finds Flies avoid being swatted in just the same way Keanu Reeves dodges flying bullets in the movie The Matrix – by watching time pass slowly. To the insect, that rolled-up newspaper moving at lightning speed might as well be inching through thick treacle. Like Reeves standing back and side-stepping slo-mo bullets, the fly has ample time to escape. And it is not alone in its ability to perceive time differently from us. Research suggests that across a wide range of species, time perception is directly related to size. Generally the smaller an animal is, and the faster its metabolic rate, the slower time passes.

What are the Great Pyramids really made of? The Ockham's Razor quip is in desperate need of some more data, because there are some, err, "concrete" reasons why this isn't conventional wisdom. First off, modern proponents of the notion suggest there there are *disparities* between some of the casing stones, which would indicate that 80% of them were quarried and a maximum of 20% were cast. It's pretty easy to visually distinguish between the supposedly cast and supposedly chipped stones. There's not really very many people contending that the overwhelming bulk of the pyramid's mass is rock. Bananas and Monkeys Original source unknown. (But the story appears to have some basis in fact.) Start with a cage containing five monkeys. Inside the cage, hang a banana on a string and place a set of stairs under it.

How Dumb Thinking Leads to "Uh Oh" Moments Ever been wrong? Forced into damage control? Feel stupid after-the-fact? *bellaMUMMA {life is beauty-full}: 100 ways to UNCOMPLICATE YOUR LIFE I 'STUMBLED UPON' THIS POST AT 'LIVE THE CHARMED LIFE' AND I LOVED IT SO MUCH, I JUST HAD TO SHARE IT! It begins... You see, when we’re born we see the world in an uncomplicated way. We know what we need, and we ask for it. We like nice people, and we don’t like mean people.

Time perception Time perception is a field of study within psychology and neuroscience that refers to the subjective experience of time, which is measured by someone's own perception of the duration of the indefinite and continuous unfolding of events. The perceived time interval between two successive events is referred to as perceived duration. Another person's perception of time cannot be directly experienced or understood, but it can be objectively studied and inferred through a number of scientific experiments. Time perception is a construction of the brain that is manipulable and distortable under certain circumstances. These temporal illusions help to expose the underlying neural mechanisms of time perception. Journal home : Nature Raphael Lis, Charles C. Karrasch, Michael G. Poulos, Balvir Kunar, David Redmond, Jose G.