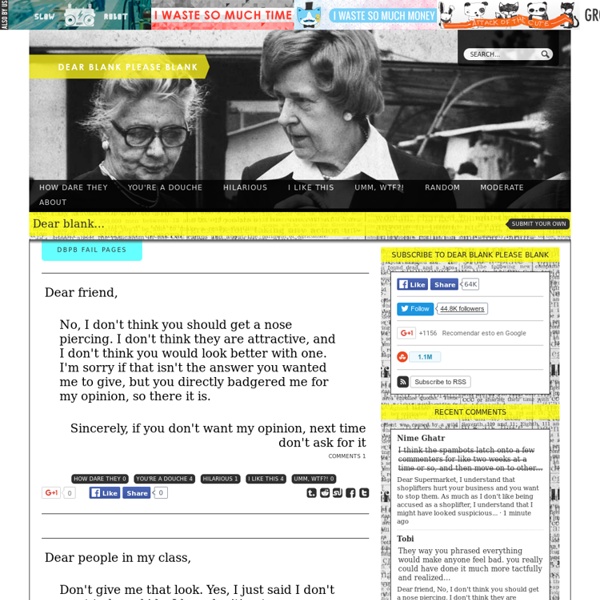 Dear school system, Please consider adding a mandatory class in basic logical argumentation. A lot of people apparently need lessons on things like burden of proof. Sincerely, Tired of "here's my stance, now prove me wrong" Dear Mom, So, because you can't complain about my straight-A grades, my use (or lack thereof) of drugs/alcohol, or my future plans of going to college on a scholarship, you decide to complain about how much time I'm spending at church..?

Before I Die & Candy Chang - StumbleUpon What matters most to you Interactive public art project that invites people to share their personal aspirations in public. After losing someone she loved and falling into depression, Chang created this experiment on an abandoned house in her neighborhood to create an anonymous place to help restore perspective and share intimately with her neighbors. The project gained global attention and thanks to passionate people around the world, over 1000 Before I Die walls have now been created in over 70 countries, including Kazakhstan, Iraq, Haiti, China, Ukraine, Portugal, Japan, Denmark, Argentina, and South Africa.

Ultimate To Do List Image Credit: DCI Ami James counts down 30 of the most mind-blowing experiences the world has to offer. These are the ultimate things to do while you're still young enough to do them and get away with it! Ami offers the following three rules for getting a tattoo. Make sure that whatever you're going to get tattooed is something that you put a lot of thought into.It's one thing to get your kid's name tattooed, but remember tattoos last a lot longer than romance.Don't get tattooed for anyone else, get tattooed for you. The Rathaus With a Nico-esque voice captivating melodies strangely dark and sweet all at once, songstress Cate Le Bon holds her own as more than just the opening act for St. Vincent. However, she is the opening act for St. Vincent so don’t be late!

What Compassion Is Photo: pedrosimones7 The other day I was out walking my son in his stroller (my now constant occupation) when a homeless woman approached me asking for money. I’d seen her before in the neighborhood many times, including behind our condominium using drugs. I turned down her request and continued walking, to my chagrin, as if the wind had blown a newspaper against my leg and I’d kicked it away without any thought.

** Happiness Is...** I'm putting on a brave face today, posting this post. Eighteen months ago, I never thought I'd be writing about my fertility woes. But I chose to bring up this subject because I'm tired of keeping it to myself. It shouldn't be a secret.

Related:  trippyfalls • sayings • Humour • Websites for the Bored • Websites I go to Alot. • fun • Procrastination • Websites for when I'm bored • humour • Entertainment • To read • Productivity Murderers • Funny • FUNNY • Waste Time and Internet • webcomics + other distractions • Fun Things • origamigal3 • Timewasting • Funny Finds • HUMOUR • Procrastinator • Funny
Related:  blogs   -  random shit!   -  Similicio.us - Sites like the ones you love!   -  7 Books We Lost to History That Would Have Changed the World | Cracked.com   -  Extraordinary funny and clever illustrations   -  The Motherfucking Pterodactyl - The Oatmeal   -  News and Technological Information | Information about anything and everything   -  The Best English-Language Fiction of the Twentieth Century - By Rank   -  GIF Collections, Epic GIFs, & Viral Videos   -  The Experience and Perception of Time   -  BibleContradictions-ReasonProject.png (PNG Image, 3327 × 4418 pixels) - Scaled (14%)   -  Book of Enoch - Wikipedia, the free encyclopedia   -  6 Factors That Secretly Influence Who You Have Sex With   -  Android Arts   -  How to Hunt Elephants   -  JAMES FACE - OLI + ALEX   -  [ wu :: riddles(hard) ]   -  English language did you knows   -  174,203 Things You Can Do Instead of Watching TV | Whole9   -  One Sentence archive   -  13 Interesting Facts about Dreams | Tasty Human   -  20 Captivating Photos Shot At Exactly The Right Moment   -  Visualizing The Size And Scale Of Our World   -  Best of just for laughs HQ - YouTube   -  7 Books We Lost to History That Would Have Changed the World | Cracked.com   -  We are the Alphabet - YouTube   -  game   -  Mind = Blown | I Can Has Internets   -  A mother like no other | MNN - Mother Nature Network   -  Thanksgiving as a kid VS Thanksgiving as an adult - The Oatmeal   -  List25 - Consistently Conciliating Curiosity   -  20 Hysterical Roommate Notes | SMOSH   -  The Most Bizarre Comments on YouTube (18 pics) | Redrif   -  :: procatinator ::   -  Problem loading page   -  The 10 Most Puzzling Ancient Artifacts   -  w-horz3.jpg (JPEG Image, 580 × 1207 pixels) - Scaled (83%)   -  The Restart Page - Free unlimited rebooting experience from vintage operating systems