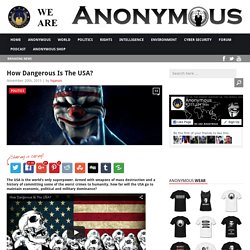 The Hardest Pill To Swallow. I come from a military family. 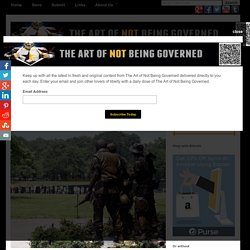 Every generation for well over 100 years has entered the military. I myself am a second generation Marine grunt. My father spent 2.5 years of his life in South Vietnam. He suffered tremendously from the horror of war. They served their country. Now they can’t live in it. U.S. 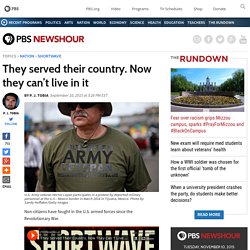 Army veteran Hector Lopez participates in a protest by deported military personnel at the U.S.- Mexico border in March 2014 in Tijuana, Mexico. Photo by Sandy Huffaker/Getty Images Non-citizens have fought in the U.S. armed forces since the Revolutionary War. Some 65,000 green card holders now serve in the military, according to the Pentagon. Do You Know How Many Countries the US Military's Deployed In? After ISIS Killed His Friends, This Guy Founded a Security Firm to Kill ISIS. Matthew VanDyke. 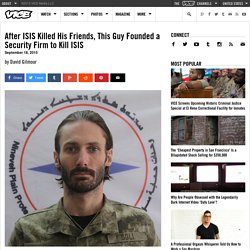 All photos courtesy of VanDyke In 2013, VICE spoke to Matthew VanDyke, an American documentary-maker who decided to pick up a gun and fight against Gaddafi in the Libyan revolution. His story is extraordinary. Taking his place at the frontline in a recent Middle-eastern conflicts, Matthew lives a life that makes Hemingway's look a little dull. He's traveled North Africa and the Middle-East by motorbike, visited Bin Laden's home, and been taken as a prisoner of war. The United States Probably Has More Foreign Military Bases Than Any Other Peo... With the US military having withdrawn many of its forces from Iraq and Afghanistan, most Americans would be forgiven for being unaware that hundreds of US bases and hundreds of thousands of US troops still encircle the globe. 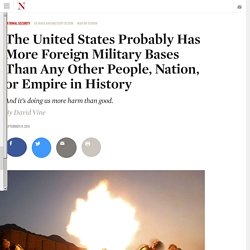 Although few know it, the United States garrisons the planet unlike any country in history, and the evidence is on view from Honduras to Oman, Japan to Germany, Singapore to Djibouti. Like most Americans, for most of my life, I rarely thought about military bases. Scholar and former CIA consultant Chalmers Johnson described me well when he wrote in 2004, “As distinct from other peoples, most Americans do not recognize—or do not want to recognize—that the United States dominates the world through its military power.

200 Years of US Military Interventions - Interactive Map. As the United States fights military campaigns in Iraq and Syria, take a look at the long history of overseas US military deployments. 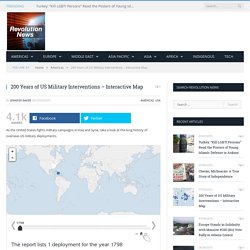 A recent report by the United States Congressional Research Service details hundreds of overseas military deployments spanning more than two centuries. The scope of and justification for the deployments vary wildly, from conflicts with pirates and bandits to formal declarations of war against an array of sovereign nations. Explore where, when and why US armed forces have been deployed using our interactive map. State Department Resumes Arms Sales to Bahrain. The State Department announced it will lift its freeze on arms sales to the repressive government of Bahrain on Monday, despite the country’s myriad human rights abuses in recent years, including arbitrary detention of children, torture, restrictions for journalists and a brutal government crackdown on peaceful protestors in 2011. 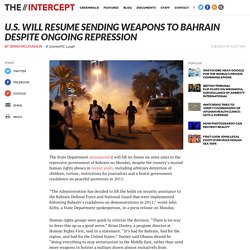 “The Administration has decided to lift the holds on security assistance to the Bahrain Defense Force and National Guard that were implemented following Bahrain’s crackdown on demonstrations in 2011,” wrote John Kirby, a State Department spokesperson, in a press release on Monday. Human rights groups were quick to criticize the decision. Deaths In Other Nations Since WW II Due To Us Interventions By James A. Lucas. U.S. Soldier Uses Heart Breaking Wikileaks Video To Make His Point. Glogin?mobile=1&URI= Problem loading page. CIA Director: War on Terror will never end. 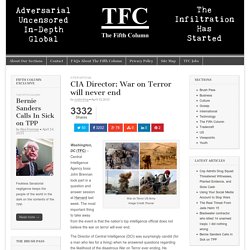 The most important thing to take away from the event is that the nation’s top intelligence official does not believe the war on terror will ever end. The Director of Central Intelligence (DCI) was surprisingly candid (for a man who lies for a living) when he answered questions regarding the likelihood of the disastrous War on Terror ever ending. He ham-handedly attempted to stick to the tired old clichés and talking points, but he was open and honest about one fact: America’s sons and daughters will continue to die under this ill-conceived foreign policy for “millennia” to come. Defense One, a military-industrial complex trade magazine that partners with the Council on Foreign Relations, provided some wonderful quotes:

What we can learn from the day the US burned to death 100,000 women and children. Meet the Texan Who Traveled Overseas to Fight ISIS. Wednesday was a fierce day of fighting in Iraq. 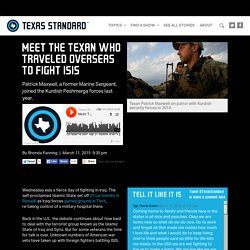 The self-proclaimed Islamic State set off 21 car bombs in Ramadi as Iraqi forces gained ground in Tikrit, re-taking control of a military hospital there. Back in the U.S., the debate continues about how best to deal with the terrorist group known as the Islamic State of Iraq and Syria. But for some veterans the time for talk is over. Unknown numbers of American war vets have taken up with foreign fighters battling ISIS.

Texas Standard speaks to retired Marine Corps. Support our troops. » Manning on torture in new Guardian op-ed Chelsea Manning Support Network. March 9, 2015 by Chelsea E Manning “The CIA’s torturers and the leaders who approved their actions must face the law.” 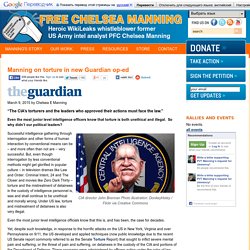 Even the most junior level intelligence officers know that torture is both unethical and illegal. So why didn’t our political leaders? CIA director John Brennan Photo illustration: DonkeyHotey / Flickr via Creative Commons.