Visualizing The Size And Scale Of Our World 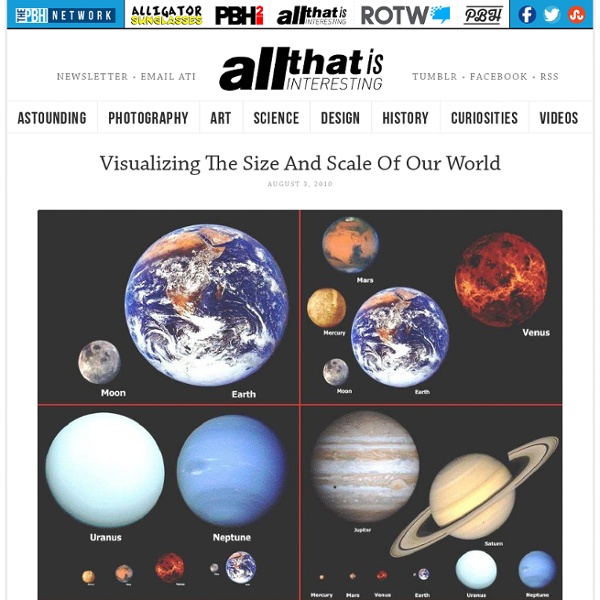 Dark alien planet discovered by NASA An alien world blacker than coal, the darkest planet known, has been discovered in the galaxy. The world in question is a giant the size of Jupiter known as TrES-2b. NASA's Kepler spacecraft detected it lurking around the yellow sun-like star GSC 03549-02811 some 750 lightyears away in the direction of the constellation Draco. The researchers found this gas giant reflects less than 1 percent of the sunlight falling on it, making it darker than any planet or moon seen up to now. [The Strangest Alien Planets]

Here are 10,000 reasons to be excited about deep-space exploration They'll ask why we continue to strive to see further and deeper into space than ever before, without knowing what we'll find. They'll ask why we insist upon exploring a solar system that, by their account, has no immediate bearing on our lives. And they'll ask why, in light of recent budgetary crises, space agencies the world over deserve funding to seek out answers to the mysteries of a Universe that we will never fully understand. Wealthiest Americans of All Time Open any major news site or newspaper these days, and chances are pretty good you’ll be reading about entrepreneurs-turned-celebrities Mark Zuckerberg, Dennis Crowley or Andrew Mason (who recently shocked us all by turning down Google’s $6 billion offer for his company, Groupon). Sure enough, those young folks are truly fascinating: still in their 20s or early 30s, internet revolutionaries, millionaires. Look at the big picture, though, and you’ll realize that at least when it comes to personal wealth, they still have a long way to go. And probably will. Compared to, for lack of a better word, their “older” super-wealthy counterparts, the young entrepreneurs can’t even make the top 50. (Mark Zuckerberg ranked 212 on Forbes’ 2010 Billionaires list, with a net worth of $4 billion as of March.)

10 Terrifying Planets You Don't Want To Visit Space Space exploration is a grand adventure. Its mystery has always captivated us and the inevitable discoveries to come will add to the many cosmological insights we already have. But let this list serve as a warning for any weary inter-solar travelers. The universe can be a very frightening place. I hope no one should ever find themselves stuck in one of these ten worlds. Absolutely mindblowing video shot from the Space Shuttle during launch Unless I'm misreading the speedo, the word "transonic" is used somewhat inaccurately. If I'm not mistaken, the vehicle went transonic quite a bit before this point. The visible shockwaves only go on for a range of about 100mph, which seems too short for the passage from the initial transonic range to supersonic. What the producer seems to mean is that it is going supersonic (passing the sound barrier).

The History of the Universe in 200 Words or Less Quantum fluctuation. Inflation. Expansion. Strong nuclear interaction. Particle-antiparticle annihilation. Scientists Discover The Oldest, Largest Body Of Water In Existence Scientists have found the biggest and oldest reservoir of water ever--so large and so old, it’s almost impossible to describe. The water is out in space, a place we used to think of as desolate and desert dry, but it's turning out to be pretty lush. Researchers found a lake of water so large that it could provide each person on Earth an entire planet’s worth of water--20,000 times over. Yes, so much water out there in space that it could supply each one of us all the water on Earth--Niagara Falls, the Pacific Ocean, the polar ice caps, the puddle in the bottom of the canoe you forgot to flip over--20,000 times over. The water is in a cloud around a huge black hole that is in the process of sucking in matter and spraying out energy (such an active black hole is called a quasar), and the waves of energy the black hole releases make water by literally knocking hydrogen and oxygen atoms together.

If The World Were A Village of 100 People Sometimes we can be caught up with what is directly around us, seeing only what is in our own microcosm. Sometimes, however, when we are clear of mind and take a step back, we see that the world is far different then we thought. Toby Ng Design has created a superb series of posters that cleverly help us get an overview of how the world really appears. The 20 poster collection, titled ‘The World of 100’ is available for purchase at toby-ng.com Source: brainpickings.org If the Moon Were Only 1 Pixel - A tediously accurate map of the solar system Mercury Venus Earth You Are Here 2012 March 12 - The Scale of the Universe Interactive Discover the cosmos! Each day a different image or photograph of our fascinating universe is featured, along with a brief explanation written by a professional astronomer. 2012 March 12 The Scale of the Universe - Interactive Flash Animation Credit & Copyright: Cary & Michael Huang Explanation: What does the universe look like on small scales?

Incredible Space Pics from ISS by NASA astronaut Wheelock Go Discovery! It was October 23, 2007 at 11:40am EST when I had my first ride to space on Discovery. She’s beautiful… just sad that this will be her last voyage. STEPHEN HAWKING: How to build a time machine By STEPHEN HAWKING Created: 18:47 GMT, 27 April 2010 All you need is a wormhole, the Large Hadron Collider or a rocket that goes really, really fast 'Through the wormhole, the scientist can see himself as he was one minute ago. But what if our scientist uses the wormhole to shoot his earlier self? He's now dead.