How to crack a Masterlock 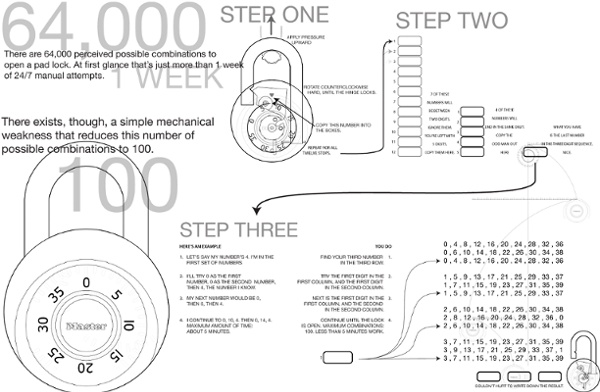 Super Glue Corporation Super Glue is renowned the world over for the strength of its bonds, its versatility of use, and easy application. Whether a hole needs a seal or a crack needs repairing, Super Glue is the first thing that craftspersons, hobbyists, and contractors use for all their construction or repair needs. Because Super Glue is so strong and bonds so fast, some people may find that they have accidentally glued two fingers together, or found that that small piece of balsa wood or plastic from a model they were building has completely bonded to their skin! Not to worry, for even though Super Glue is incredibly strong, it has one weakness: acetone. Acetone is often found in household nail polish remover, and a small amount on the end of a Q-tip or cotton swab applied directly to the glue should dissolve the bond without damaging the skin.

How Lockpicking Works This is a repository of the most up-to-date versions of Deviant's lock diagrams and animations. Seen in all of the TOOOL educational materials and slide decks, these files are all released under the Creative Commons license. You are free to use any of them for non-commercial purposes, as long as they are properly attributed and the same freedom for others is maintained in all derivative works. Please note that these diagrams have evolved and developed over time. While Deviant is still proud of the older versions of his images, if you still have copies of legacy material they should all be replaced with the latest versions available here. 25 Vintage Baking Tips: Timeless Wisdom I’ve collected these snippets of baking tips from vintage cookbooks and magazines dating from the 1940′s through the 1950′s…the Timeless Wisdom collection is a regular feature on Tipnut where I organize and share all kinds of tips from the past. Vintage Rolling Pin, Eggs & Flour Butter and sugar can be creamed easily when butter is hard by warming the sugar slightly.Light-colored molasses can be darkened to make dark gingerbread by adding a teaspoonful of melted chocolate to each cup of molasses.Cream which is hard to whip will whip quickly by adding a few drops of lemon juice.Molasses can be prevented from sticking to the measuring cup if the cup is first greased with butter or lard.Shortening can be measured exactly.

2_Darwin%20tree When I began as a film critic, Jean-Luc Godard was widely thought to have reinvented the cinema with "Breathless" (1960). Now he is almost 80 and has made what is said to be his last film, and he's still at the job, reinventing. If only he had stopped while he was ahead. That would have been sometime in the 1970s. Maybe the 1980s. 52 Ideas to organize your home: An organizing tip a week "Organizing" may make for fun Pinterest fodder, but for us folks back here in the real world, it's pretty much a four-letter word. Organizing sounds like a great idea in theory — especially while browsing hacks on the internet with a full glass of wine in hand. But without a solid plan in place — one made up of simplified organizing tips that can be used IRL — you're probably going to throw in the towel before the towel organizing is done.

Updates: The Get Off Your Ass Manifesto: How to Motivate Yourself to Actually Achieve Your Goals By Thorin Klosowski Starting something new is hard. It can even be a little terrifying. 10 Really Easy Ways to Unclog Drains Wise Bread Picks We all know the warning signs. The sink takes a little longer to drain. You begin to notice water pooling around your feet in the shower. How to Fly Anywhere, Anytime FREE - Guaranteed Ladies and gentlemen, I interrupt this blog to share some new travel tips from fellow blogger and travel fiend Chris Guillebeau. To find out how to get FREE FLIGHTS please remain seated and listen carefully to the following announcement. Currently in the final two years of a five-year mission to visit every country in the world, Chris is a genius at getting free flights and amazing flight deals anywhere, anytime. Now he’s teaching other people how to get free flights. Sounds good doesn’t it? Now he’s decided to share his travel hacking secrets with us so we too can take advantage of secret flight deals anywhere and go jetting off around the globe for next to nothing or even learn how to fly free.

LUPA <form name="lst" id="lst" method="post" action=".. loupe.js 2.0 allows you to add photorealistic loupes (magnifier) to images on your webpages. The design is changeable by use of an image editing program. It uses unobtrusive javascript to keep your code clean. It works in all the major browsers - Mozilla Firefox 1.5+, Opera 9+, Safari, Chrome and IE6+.